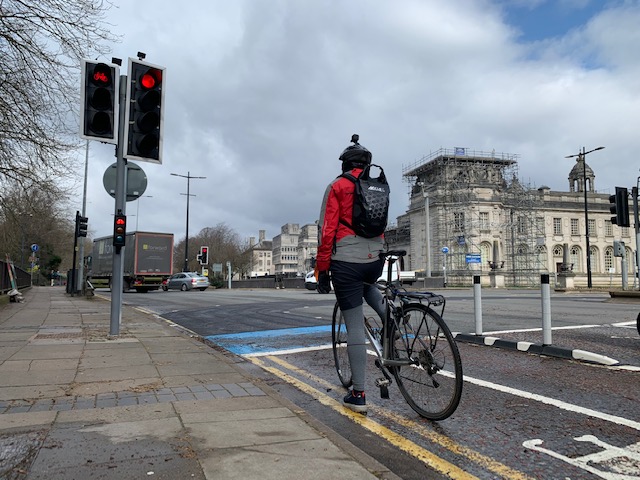 Two Cardiff bike riders are speaking out about road safety as a temporary segregated path has been opened connecting two segregated bicycle lanes along Castle Street.

Cardiff Council has opened the pop-up bike route through the city centre, which links two existing cycleways between Cathedral Road and Dumfries Place.

The route is lined with sections of rubber kerb which are bolted onto the road surface in order to separate vehicles from other forms of transport such as cyclists, skateboarders and scooter riders.

Photographer Owen Mathias often goes on bike rides with his wife and two sons, aged five and 11. He thinks attitudes need to change and a larger biking system needs to be put in place.

“Particularly at rush hour, there’s very little patience among motorists,” he said. “We seem to have a problem in our country where it seems to be the motorist versus the cyclist and as somebody who rides a bike and drives a car, it’s quite obvious when you’re on either that it’s the motorist who’s being aggressive and not following the rules of the road.

“I think what would be a safer option, really, would be to have some kind of uniform cycle network around Cardiff so you could get from one point to another point safely, where you didn’t have to battle with traffic. But if you are battling with traffic, there’d be a clear route that cyclists can follow and a clear system that anyone from the age of about 10 or 12 upwards can understand the safe way of crossing junctions and crossing the roads.

“The Wellfield Road pop-up, for example, as far as I understand it starts one end of Wellfield Road and finishes the other end which is great for people who want to cycle that road. But then you drop out onto City Road or Newport Road, which are often busy with buses and cars, and it’s not somewhere that I’d want to lead my children on a bike ride – it isn’t a place that I feel safe to cycle.”

The pop-up bike lane tackles the issue of riders entering the large, busy junction next to Bute Park by using a designated bicycle traffic light system alongside the regular traffic lights.

Recent graduate and shop worker Maisie Marston used to use her bike to get around Cardiff regularly but she has been put off by some experiences with drivers on busy streets. She thinks the council’s pop-ups are a good idea and that they should be implemented around the city.

“I think connecting the two cycleways is a really good idea because when you’re cycling it’s not ideal to have to join the road and then get back onto the cycleway,” Maisie said. “Having a segregated place to cycle, in itself, is a great idea because it feels safer, the surface is usually a lot better and generally it’s just a lot more stress-free when you’re commuting or going for a leisurely cycle.

“The obvious solution would be to make more of these cycle lanes but when they’re being built the council should think about where they are putting them and how cyclists will have to rejoin the road.

“There are some, for example, that when you come to the end you’re on the wrong side of the road so it’s really difficult to rejoin the traffic. It’s definitely a lot nicer to have a barrier between you and the traffic – it feels a lot safer and you don’t have the risk for cars to meander over. But yeah, more would be great overall.”

Councillor Caro Wild, a cabinet member for strategic planning and transport, said: “We want to make Cardiff the best cycling city in the UK and we plan to build an integrated cycleway network from the city centre which connects strategic sites and neighbourhoods, as set out in the current adopted LDP.

“In the main, the new routes will be separated from other traffic on the road, making cycling safer, easier and a far better experience. We want cycling to become a more attractive option for both residents, families and visitors, giving people the opportunity to enjoy all the health and fitness benefits it can bring.”

The council is planning to make this new pop-up lane a permanent structure in the future, but it hasn’t provided a timescale or suggested date for this to happen yet.