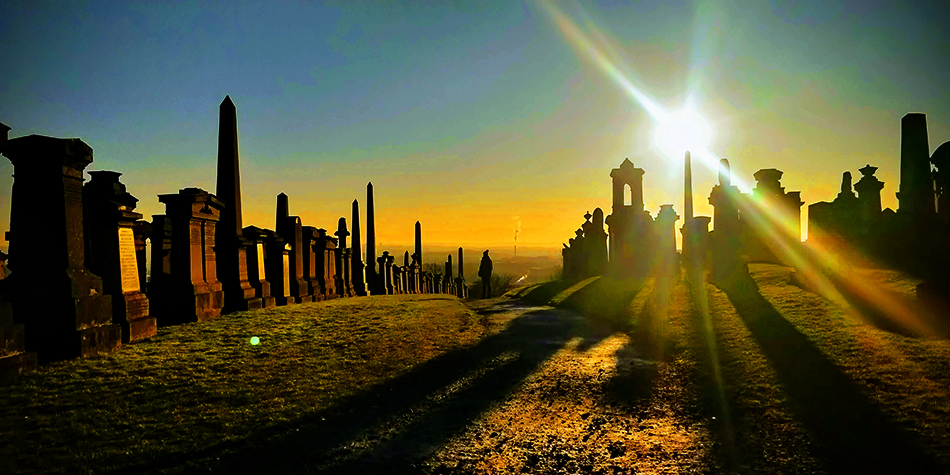 The Necropolis, Beauty of Glasgow's Victorian city of Dead, peaceful place to run away from the city.
mrunaldeshpande·15 May 2020

Death: A forbidden topic that we all should discuss

The entire world is fighting with a virus, and we all are worried about our dear ones. Is now the time we should start discussing our own finite lives openly?

On a Tuesday evening, Emily, who is in her late 60s, was looking at the laptop screen. There were a bunch of other ladies on the screen, waving at each other. Emily introduced herself and started talking, but after a few seconds, her eyes filled with tears. She was trying to speak, but words didn’t come out, her wrinkled hand went towards her eyes to wipe the tears. There was complete silence for a few seconds.

Hundred per cent we all are going to die one day, but fifty per cent or even more than that people don’t want to talk about it.

Emily met these women virtually just before 10 minutes. She didn’t know anything about them except their names, yet she was sharing probably the most emotional experience of her life. She was not afraid to be vulnerable, as everyone in the group was ready to discuss the forbidden topic.

After sipping water, with a generous smile, Emily said, “This is fascinating! Hundred per cent we all are going to die one day, but fifty per cent or even more than that people don’t want to talk about it. I never talked about death or how we want our last rituals to be with my family.” After Emily shared her part, everyone started talking about their own experiences, and the conversation continued.

It was a virtual platform of a ‘Death Cafe’ which was designed for 2 hours duration. Here they could talk about the mortality without being judged. Death Cafe is a platform where group-directed discussions about death take place. It is a safe place to open up and does not have an agenda or a speaker. Jon Underwood is the creator of the Death Cafe and the cafe is run voluntarily.

In 2010, Jon Underwood was working as a strategy and business development director for the council of Tower Hamlets. In November he came across the work of Bernard Crettaz, a Swiss sociologist. It was an article about the cafe mortals. Inspired by this initiative of Bernard, Jon decided to use a similar concept for his project. The first-ever Death Cafe of the UK was held in Jon’s own house in Hackney, East London in September 2011. It was facilitated by psychotherapist and Jon’s mother Sue Barsky Reid.

Sue Barsky Reid, a psychotherapist and co-founder of Death Cafe, said, “I think people don’t want to accept the fact that death is an inevitable part of being alive. People think that it is not going to happen to them. According to me, it is healthy to accept that one day we are going to die. People are very anxious about death because we don’t know what it means to die; there is a fear of unknown.”

Modern medicine has been so successful in prolonging life to the degree that we see death as a failure.

In 2012, Jon and Sue Barsky Reid produced a guide to allow other people around the world to run their own Death Cafe. Now the event is global, and Death cafe is being hosted in 71 countries around the world since September 2011. Death Cafe is now run by Susan Barsky Reid and Jon’s sister Jools Barsky as Jon died suddenly in 2017.

Emily and other women who were part of the virtual cafe were talking about mortality and losing the loved ones. As these women continued to have a conversation, another participant named Rachel, started sharing her experience. She was probably of the same age as Emily; she was happy that she could arrange proper final rituals for her husband who died last year.

Most of the people in the UK are not comfortable to talk about death and about how they want their last rituals to be. As a result, very few people know what type of funeral to arrange for their loved ones. According to the report published in 2019 by SunLife, less than 1% of people know everything about their loved one’s funeral choices. SunLife is a UK-based insurance business that offers life insurance, equity release, funeral plans and many other things.

According to SunLife, two in five people know whether their partner would want a religious ceremony or not and only half of them were aware whether they would want to be buried or cremated. People don’t even know what type of send-off their family members wish to have because there was no conversation about the death, dying or funeral.

Death Cafe facilitators from all over the world are encouraging the talk about mortality to increase the awareness of death. Gina Vliet, a Death Cafe facilitator from Canada who is also a Change Specialist and a Death Educator, said, “You are doing a disservice to your family members or friends by not talking about death. I am not saying it is going to be easy, it will be awkward but acknowledge it.

Another Death Cafe facilitator, Megan Mooney from the USA, has been hosting the event since 2013. She said, “I always wanted to work for people to help them be aware of their mortality. I have seen people driving 5 hours to come and visit death cafe; it made us aware of how much the conversation is needed.”

Some participants are attending death cafe for many years. Tienga Ngale, End Of Life Carers Project Manager, is attending Death Cafe since 2018. Tienga said, “To talk about death at home is still a taboo. We struggle to talk about it with our family members because we are not sure whether they want to talk about it; therefore, Death cafe becomes a safe place to open up. Death cafe teaches you to step away from judging people and about how they feel.

“Modern medicine has been so successful in prolonging life to the degree that we see death as a failure, but death is always not a bad thing. After talking openly about death, you will learn about yourself and not just about death.”

Tienga further said that according to him the best part about the Death Cafe is, it has group directed discussion of death with no agenda, objectives or a speaker. It is a discussion group rather than a grief support or counselling session where everyone gets to interact with one another. Tienga has attended four death cafes and one virtual cafe till now, and his experience of each event is different and unique than the previous one.

Gina Vliet said that most of the times, people are comfortable to talk about death, but they don’t want to cause any discomfort in someone else. According to her, it is important to give other people permission to talk about it and let other people know that you are comfortable and ready to discuss it. She suggested starting the conversation in a theoretical, general and philosophical manner before moving towards a personal and particular one. She said that after opening up on this topic, you would feel more comfortable and you will realise that it is not that scary or death-inducing experience as you thought.

The experience Emily, Rachel and other participants were having at the virtual Death Cafe was very emotional at the same time was filled with laughter, humour and jokes. There were only 5 minutes left for their meeting to end. Everyone waved at the screen and left the meeting when deep down, they all wanted to stay a little longer to share their memories because it was relaxing and calming to talk over a forbidden topic than they had thought.