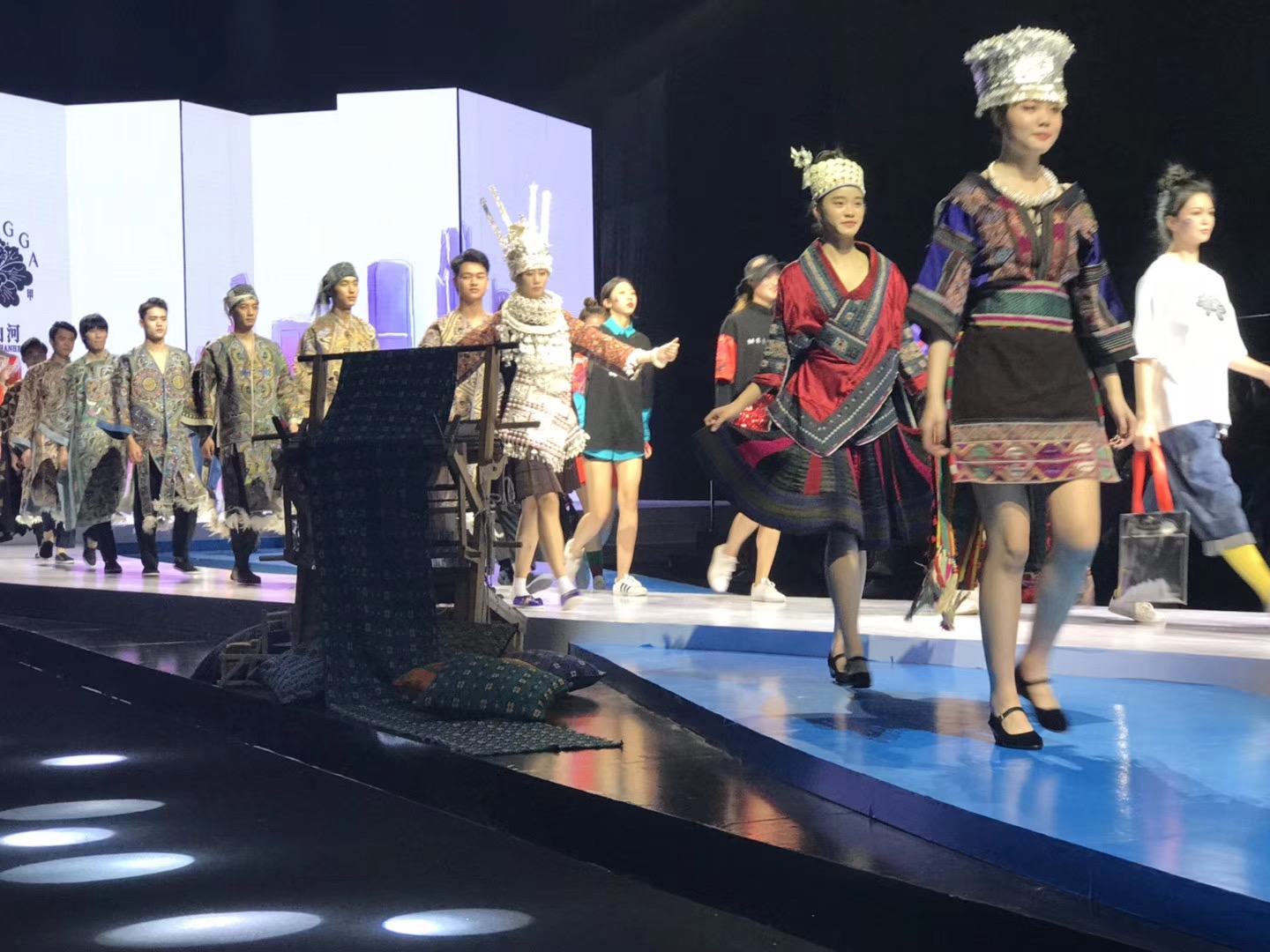 “I think we should be more united, or the Zhuang brocade will have no future,”

As the Chinese government began to emphasize cultural revival in the early 21st century, the awareness of protecting traditional culture was gradually strengthened. With this background, many people are optimistic about the growth of the Zhuang Brocade. However, what kinds of problems the Zhuang brocade industry is facing now?

Too many young people want to profit quickly, but what I can say is that they picked the wrong industry.

When I was young, I liked drawing. Later I started working in a local museum. Although I was not involved in the Zhuang brocade industry at first, I began to pour attention to the patterns of the Zhuang brocade because there were many pieces of brocade’s works in the museum.

After working for several years, I met Shen Pei, the director of Guangxi Arts and Crafts Research Institute. One day she came to me and said that she had declared a training course and related funds to the government, and chose our Tusi Museum as the venue for the training course. She wanted me to be the person in charge, and then I agreed. Then we invited Meng Rujun, the most famous local craftswoman, as our teacher. In addition to Shen Pei and I, the entire class only had several middle-age employees. We started learning in 2011 and continued to know until the end of the course in April 2012.

I think it’s a pity because Xincheng is the birthplace of the Zhuang Brocade in history, and we are the oldest museum in the region. So I started to pour attention to young artisans engaged in the brocade industry, but unfortunately, there were almost none. There is a gap in the age of the craftsman.

The thing that saddens me most is not that the leaders refused to let me do the Zhuang brocade, but even if there are young people interested in brocade, they do not take it seriously. After the training class was over, many young people came to me to learn about Zhuang brocade’s culture. They all expressed their desire to learn from the brocade, but I can feel that they are not to pass on this craft but to show off to others.

A few years ago, there was a young man in Xincheng. I knew about him when he first started doing the Zhuang brocade, so I found him and invited my journalist friends to interview him. When we got to him, I saw a collection of traditional patterns made by him. He was attentive. At that time, he made a booklet to show the conventional designs of Xincheng Zhuang Brocade in the form of taking photos. The album moved me, and I couldn’t help taking out my camera to take pictures. However, when he saw this action of me, he suddenly shouted, “What do you want to steal from me?”

I might understand his concerns, but I think the culture of these ethnic groups, such as the Zhuang Brocade, is handed down by our ancestors. It belongs to the masses, not to a specific person. If he could be more generous, I was willing to share with him the knowledge I have learned about the Zhuang brocade. But I was embarrassed at the time. My journalist friend and I left after hurriedly interviewing him.

In the thought of mine, many people, especially young people when they know that their peers are working in cultural industries like the Zhuang brocade. They consider that person is ‘cool.’ But if young practitioners want to be ‘cool,’ it is not easy. Only those who are born in art do this kind of work can achieve the ‘cool’ standard. Some people don’t spend time to learn and understand the significance of art and the Zhuang brocade so that they wouldn’t be ‘cool.’ Even if he had the intention to learn, he couldn’t seriously spend at least a year to learn the brocade.

However, I think the young man has gone through the misunderstanding. If he is not in business, he will be a pretty famous craftsman if he decided to learn the brocade and respect it.

Too many young people want to profit quickly. I can understand their desire to make money fast, but what I can say is that they picked the wrong industry.

Pan Fangwei, the accountant of the Tusi Museum of Xincheng.

All practitioners in the Zhuang brocade industry are lack of significant interaction.

After I graduated from Chongqing in 2012, I came back to Guangxi and worked in a museum. Around 2013, our museum had cooperation with a museum in Hualien, Taiwan. I was responsible for accompanying the leaders of the Taiwan Museum to visit the Zhuang brocade craftswoman in various counties and villages in Guangxi. From then on, I started to get familiar with the Zhuang Brocade. So after so many years, I am quite familiar with the market of the Zhuang brocade industry.

As I know, many older craftswomen believe that there is no market for the Zhuang brocade. I think the products they made were too old fashion result in they don’t have customers. However, there are also many companies and individuals driving the Zhuang brocade products that are in line with the aesthetic and orientation of young consumers so that these young craftsmen might have a different point of view from the old generation.

As of my opinion, the development of the Zhuang brocade is actually in the period of transition. It’s impossible to change right away. We shall allow the growth more time until the public accepts it.

After I found a new job last year, I went to another company. Although I did not engage in any work related to the Zhuang brocade industry, I always try to let more people know about the Zhuang brocade at the new company. As an example, my company runs a restaurant, and I am responsible for purchasing the soft furnishings and decorative paintings in their restaurant.

It was rather spectacular when I show a whole set of table runners and hangings made by the Zhuang brocade at the restaurant. The Zhuang brocade’s products are trendy by staff, and many of the newly developed products they have never seen before.

What I express is that one of the problems in the Zhuang brocade industry existing now is that the potential market is massive. Many people are interested in Zhuang brocade and want to purchase them. However, they don’t know how to find those products. The current situation is that there is demand in the market, and craftswoman is also creating new brocades’ products. Still, there is no effective channel or bridge provided to consumers, such as the lack of stores in the big city, and older craftswomen know nothing about marketing.

However, perhaps each craftsman has a unique style, practitioners have never worked together to develop the Zhuang brocade industry. It is not sustainable for the enterprise or individual development.

Another reason that makes the inheritance of the Zhuang Brocade intensely hard is that some old craftswoman is unwilling to teach young people. The older generation of craftswoman earns a living by weaving brocade, and they have no concept of traditional culture. They don’t think what they are doing is excellent and deserved protection by country. They did it only to survive. So if a strange young man suddenly appears and says that he wants to learn for passing on the culture, the old craftswoman will naturally refuse the young man’s request to ensure that there are no competitors to carve up their market.

In my view, for such groups, we might not consider their behaviour from the perspective of inheriting ancient culture. The government does not guarantee them, and they can’t be profitable like companies. They will undoubtedly have reservations about the method of weaving the Zhuang brocade.

There are many reasons for the lack of significant interaction among practitioners in the entire Zhuang brocade industry, whether between the craftswoman or buyer and sellers.

Yu Mingfeng, worked at the culture and creativity department of the Museum of Guangxi Zhuang Autonomous Region.

The government does not provide enough opportunities for young people.

I have been working in the Zhuang brocade industry for decades and always believed that if the government does not pour attention to it, there is no way to develop the industry. The current government policies do not guarantee young people with opportunities.

Many young people have complained to me that they have no idea what policies are available to support them develop in the Zhuang brocade industry. But I would say that even for experienced veteran craftswomen, only a handful have received government support financially.

There are several problems with the government’s policy. First, they do not attach importance to the development of the Zhuang brocade in both finance or policy support.

I once helped a well-known craftswoman in Guangxi. She has been weaving the Zhuang brocade for decades and is very experienced and qualified. However, in the past few decades, she only once received a government subsidy worth 100,000 yuan, around 11,500 pounds.

So two years ago, I helped her apply for government subsidies, and then the government agreed to subsidize her with 500,000 yuan. This 500,000 yuan is the first time in her life that she has received so much financial assistance. As a master of Zhuang brocade, she only got a mere 600,000 yuan supporting brocade weaving in her lifetime.

Hence, in my way of thinking, as a representative of the Zhuang nationality in Guangxi, Zhuang Brocade has existed since ancient times. Still, it has not become a well-developed industry until today. The absence of the government bears a large part of the responsibility.

The second problem is that even if there is a policy to support Zhuang brocade’s development, the beneficiaries are the older craftswoman. Young people have no opportunities to gain support. Some people who have new ideas for the development of the Zhuang brocade industry have not been discovered. Gradually, these people will be unable to develop because of a lack of support, even if they want to work in this industry, but no one will help them. The government does not support or encourage, nor introduce new policies, nor offer opportunities.

For young people who have no connections or social resources at the beginning of their careers, no matter how passionate they are, they might not stay in the Zhuang brocade industry for a long time. It seems that good opportunities should be left to young people, and the future of this industry is in the hands of young practitioners.

The last problem is that the policy channels issued by the government are not open and transparent. Even the government has not made the support policy public, and they have already decided who the beneficiary is. It is very detrimental to young people who have no personal connections, who have no resources to earn opportunities.

For those young craftsmen who work in big cities, they are lucky because they might have many opportunities to travel in different cities and countries, learn the cultures of other regions, and then integrate these cultures with the Zhuang brocade to create a new product. However, for craftswomen living in counties and villages, they would not learn about different cultures. When their economic conditions do not allow, the government should provide them with guarantees and offer more opportunities to learn modern textile technology and new industry knowledge.

So, from my perspective, the government’s failure to offer young people enough opportunities is one of the most significant factors that make the development of the Zhuang brocade industry arduous.

Interviews conducted and text interviews shortened and edited for clarity by Yun Gu.