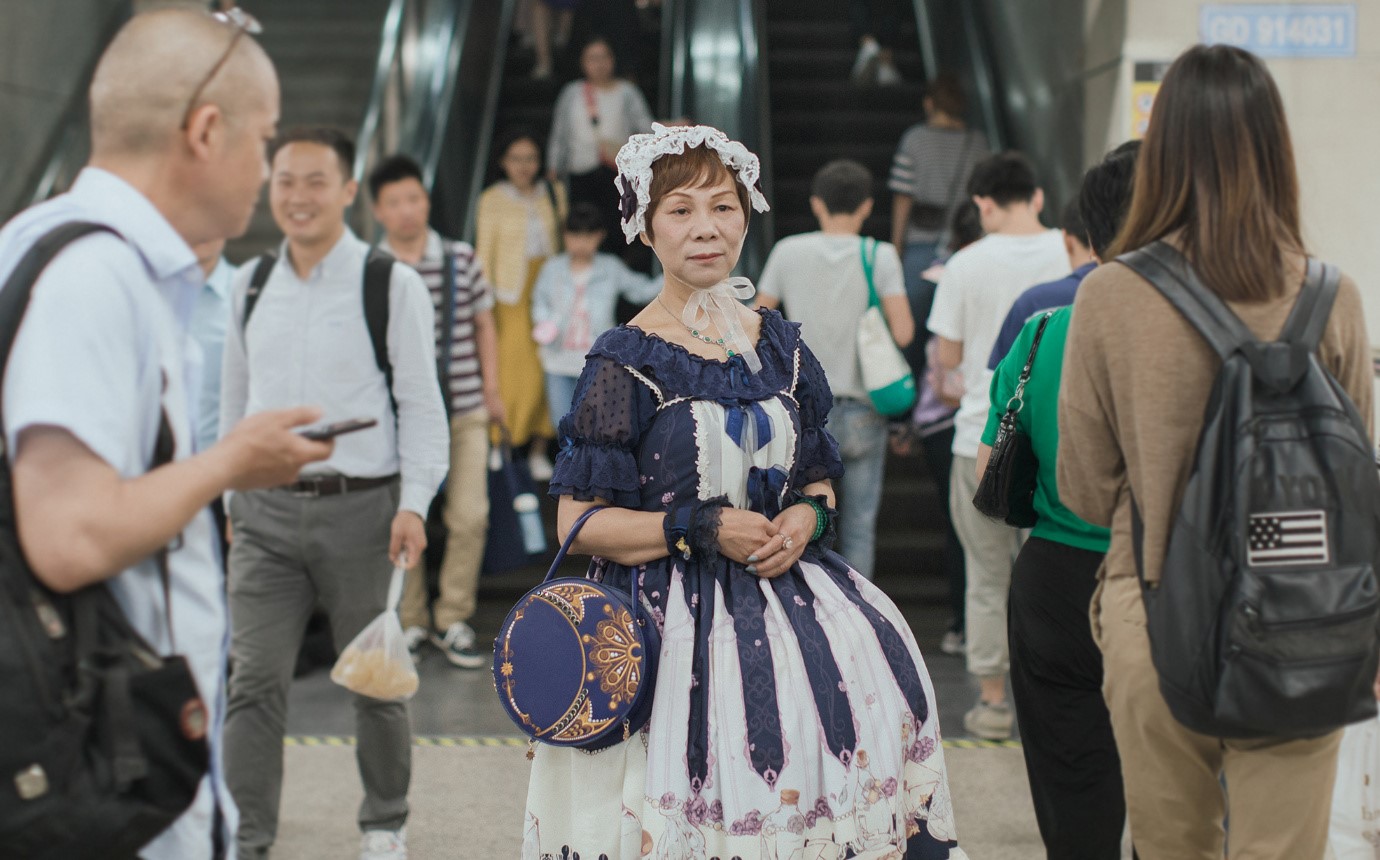 “Lolita fashion could express feminism. It depends on you.”

More young girls are wearing Lolita dresses, a fashion adopted from Japan. What would they like to express through their clothing, especially as adult Lolita lovers?

A group of girls are sitting together in pettiskirt in a tea party especially held for Lolita girls. They are drinking tea in exquisite tea sets , eating fancy cakes in a graceful way and chat with each other as if in the middle ages of West.

It is the second time that Sansan and other Lolita lovers gather on the spot. Tea party is the usual way to socialize and meet new friend among the group of Lolita fashion lovers.

Among them, except for teenagers who make up most of the group, some Lolita fashion lovers are adults, aged over 30. They are the special group that stand out but in an awkward position meanwhile.

“I have been attacked by others on the Internet, saying that women in their 30s should not dress like 20s, but I don’t think there is a age limit for a certain dressing style.” says Lolita lover Sansan who works as an employee of foreign enterprise

In China, the aesthetics of white, skinny and childlike is popular among the young generation. Although it is being criticized as an unhealthy criteria for woman, many woman look up to this kind of shape and dress in corresponding clothes style.

It seems that media and the retailers use the “white, skinny and childlike” aesthetics as the selling point of Lolita clothes and spread this aesthetic to advertise for the products. For example, many Lolita clothes stoles use the description of white, thin and childlike as advertising slogan.

“It is a pity that many stores are now simply and rudely replacing Lolita clothes with the aesthetics of white, thin and child-like,” Sansan said.

Holly Xue, as queer feminist, thinks otherwise. Holly believes that despite the fact that Lolita fashion suits the aesthetics, it takes this aesthetic tendency to extremes and has its distinct style instead of simply marketing techniques.

Although for Lolita lovers like Sansan, the Lolita culture is not to cultivate this monotonous taste , many women wearing Lolita seem to cater to this kind of aesthetic.

As for this aesthetics, Cao believes it shows weakness and no aggressiveness. It reminds her of foot-binding in China and corset in west in the history, when women’s bodies are restrained to ingratiate men’s aesthetics, not to please themselves. For Cao, the similarity of them is to make women easy to control by leading their fashion trending.

Cao’s opinion represents what others view the group of women wearing Lolita clothes. It leaves the public the impression of plus-size children’s clothes. Because of this, adult Lolita lovers dressed in this way face malice about age. Women in this outfit is usually recognized as pretending to be young, which is not appropriate at this age.

What’s worse, women in Lolita dresses are even suspected as pandering to paedophiles by quite a few people.

But it is a typical misconception for Lolita lovers. For them, wearing Lolita dresses has nothing to do with the crime to children.

“People do sometimes confuse the Lolita fashion with the concept of Loli(littel girls). Actually only the style of sweet Lolita dresses would make wearer look cute and younger. Nevertheless, the classic and gothic styles would not be that way.” says Sansan.

In fact, women dressed in Lolita dresses do look younger. For Lolita lovers longing for the life in childhood, the outfit of Lolita dresses actually makes them feel like going back to the childhood. And the essence of Lolita fashion is to revert to childhood and escape from reality.

So, what is the reality for adult Lolita lovers, especially for those who are approaching 30? According to sample survey from Chengdu Business news, 10% of the group are aged over 30. For those Lolita lovers, their living environment are the same as other ordinary women aged approaching 30.

In the workplace, a survey conducted by the China Youth news among 1973 professionals from all walks of life showed that 86.2% of the interviewees feel that the opportunities for women aged 30 drop sharply. The main problems faced by women are difficulty in obtaining promotion opportunities, and lack of access to important business and personnel arrangements.

In the marriage market, woman aged around 30 are put in the awkward positions. The discrimination towards unmarried woman in 30s is common.

In 2007, the All-China Women’s Federation defined the term ‘leftover women’, to mean an urban, educated woman, over the age of 27 who is still single.. And China’s Ministry of Education adopted the term as part of its official lexicon.

“The official Chinese medium have been pushing the term through with the news reports, and with their columns and commentaries, the term is extremely common.” Former journalist Leta Hong Fincher , the author of the book Leftover Women says.

She told the East Asia Pacific that , a lot of these women in their mid to late twenties were very, very anxious to get married, because they’re at that so-called “leftover” age.

One-child policy prohibited families from having more than one child from 1980 to 2016 in order to limit population growth. But the policy was changed in 2007 due to the great gender imbalance caused by selective abortion. The government encouraged women to marry young and have at least two children since then.

At the same year, the term “leftover women” was used by the state-run media. It also appeared in the website of government supportedly feminist All-China Women’s Federation. Those “leftover women” or about to become can be under serious social pressure.

Behind the increasing number of “leftover women”, except that some women choose to be bachelorism, lots of women become “leftover women” not out of their will. According to the statistics of Jiayuan Dating, China’s largest formal dating platform, in Beijing, there were about 500,000 “leftover women” in 2013. In 2020, the number reached 800,0000. The Chinese women aged around 30 or even at their early 20s are being hunted by the anxiety that they could be left over.

“Age is not a hindrance to pursue cuteness. There are several famous Japanese models such as Misako Aoki and Tsui Fukasawa who are over thirty. But they always stick to their lives in an elegant way and show everyone this culture. “Gabrielle as a Lolita lover and college student says.

“Never too old to pursue cuteness” is not merely a slogan for Lolita lovers. Yuyu is special in the group of Lolita lovers because of her age.

“The cuteness of women has nothing to do with wrinkles around the eyes.” says Yuyu. Yuyu and her daughter chocolate who owns a Lolita fashion store in Shanghai even consider to make Lolita dresses for women like Yuyu.

“I was in Born in 1959 and I just celebrated my 60th birthday. But even if I’m 70, I would wear Lolita dress to go shopping” Yuyu tells Sina News.

Compared to the young Lolita lovers, buying Lolita dresses is a affordable hobby considering the high expense of the clothes.

Ashley, works as Diectician finds the convenience of being an adult Lolita lover that enter the society. “At this age, we have more freedom to make purchasing choice after achieving economic independence compared to the students.”

She says:”As a subcultural dress style, it is obvious that it shows a heterogeneous expression . It is also the awakening of self-consciousness and self-selection, giving many people a sense of belonging in s small group.”

The attitudes to not follow the mainstream aesthetics actually existed early when the Lolita fashion as a street fashion emerged in Japan in 1980s. To rebel from the mainstream aesthetics, the Lolita subculture used it as a form of resistance to oppose societal norms. Despite the controversy around Lolita as a possible fuel for pedophilia, Lolitas are against the objectification of females.

Japan’s first Lolita brand was born in1976. In the 1990s, Lolita fashion gradually became an independent fashion style. Then this trend entered China.

Influenced by Japanese culture, Gabrielle fell in love with Lolita fashion after watching the movie Kamikaze Girls and Nana. “It is the rebellion to the ordinary aesthetics. I think it is unique and delicate. You will unconsciously dress up and fit the delicate style. Wearing it does bring me some confidence.” Gabrielle says.

Lolita fashion make changes to many woman in many ways. It brings Lolita lovers together and creates the small communities that share the same interest and passion in Lolita fashion and culture.

“I have met many people who are totally different from me, which expanded my friend circle, At the same time I have a new understanding of interpersonal relationships and human diversity as well.” Ashley says.

Among a large group of Lolita lovers, women in Lolita dresses are in different occupations with shared interest, including nurses and doctors in Wuhan. Amid the Covid-19 Pandemic, they were in the front line with the same faith.

“When the pandemic is over, then we could dress in Lolita dresses together outside as normal.” says Mitsu, who works at inspection department of hospital tells the Girlism Magazine.

For them, Lolita fashion is not longer a kind of dressing style from a foreign country or foreign culture that has an impact on them. With the combination of Chinese characteristics, Lolita fashion has been localized and developed in China.

“Domestic brands of Lolita dress have used more elements, and are more diverse in the market. I think domestic Lolita brands create new categories, instead of being restricted to the basic substyles.” Ashley says.

The public shows more tolerant attitude for this fashion style, and girls wearing Lolita dresses on the street are also common. There exists more interpretations for Lolita fashion and Lolita girls show up to justify for it.

For Sheng,whether Lolita fashion is just fashion or beyond that is defined by woman wearing it. wearing Lolita could express feminism.

She says:“ Feminism can be expressed by essays, demonstration or any other behaviors in life. Why not it includes wearing Lolita dresses? The point is the woman in the dress and how she interprets.

“I want to speak for the group, wear the dress you like and walk the way you like.”