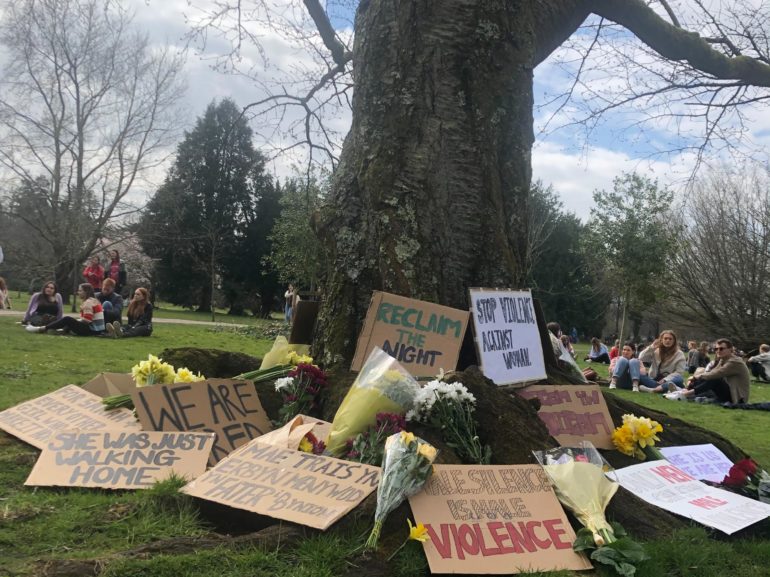 More than 500 young people came to Bute Park in Cardiff for a vigil to pay tribute to Sarah Everard on Sunday. Concerns about women’s safety have raised in the UK.

It’s been more than two weeks since Sarah Everard death happened on 3rd March, left for citizens a deep reflection that how the women could be free from such dangerous environment, and how the society can be secured?

A series of protests and vigils have been held across the UK. In Cardiff, after the protest of “Kill The Bill” was held on Saturday, more than 500 young people carried out a vigil for Sarah’s death on Sunday. Many of them were undergraduate students in Cardiff. The Vigil was placed on the grass space beside the Secret Garden Café, in the middle of Bute Park.

By 11 am, many young people were seated in the green space and around a tree surrounded by signs and flowers. They all felt sadness for what happened to Sarah and they wanted to spend the weekend to remember her. Some female volunteers said they want to continue to trust the police officer but it is hard to do that at the moment.

Lois Barber, one volunteer of the vigil, she said schools should pay more attention to the education of boys as early as possible.

Sexual harassment has become a serious issue across the UK; volunteers think apart from women should raise awareness, the government should take steps such as increasing street lights and establishing safe community centre.

Vanshika Anand, the organizer of this Vigil, she said everyone should be careful.

A group of young parents who were passing by the vigil said Sarah’s case inspired them to value the family education of their children when they are in young age, they believe children should aware to respect girls, and childs should be told which behaviours are acceptable and which ones are not, problems could be avoided early.

At the end of vigil, crowds of young people lit candles and formed a circle to pray for Sarah Everard.