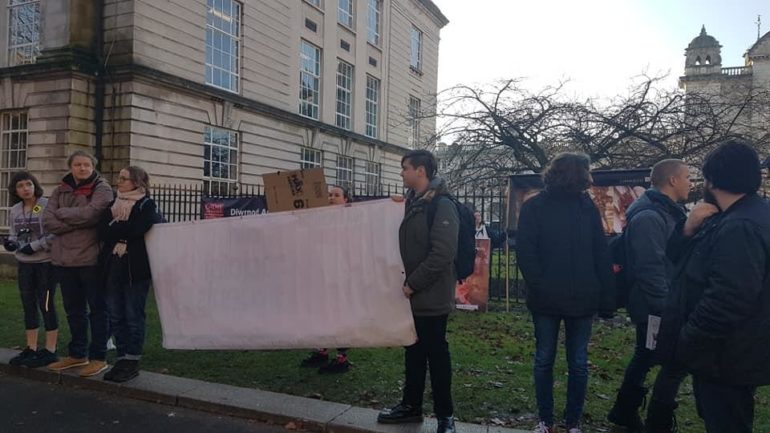 The anti-abortion protesters used graphic pictures as part of their protest. They say they are not anti-abortion but pro-life which means they are in favour of life for every human being from conception to natural death. But a pro-choice campaign group called Abortion Rights Cardiff says their behaviour is harassing students and staff.

The anti-abortion groups say they will continue their protests in Cardiff until April. They want to change people’s pro-choice opinion. But Isadora Sinha, the leader of pro-choice group, says people cannot avoid seeing the protest and graphic abortion pictures when they passing by. Isadora says those anti-abortion groups are forcing people to see their opinion, which may impact people’s mental health.

Isadora says the pictures displayed are not real and does not know where they source a large part of their information. She says: “95% of women who had abortions do not regret it at all… They are hurting the women who are pregnant. And on the top of that, the students who are quite antipathetic to this are now very pro-choice, because of their harassment. So they are doing the opposite of what they are doing at the moment.”

Some think the images posted by anti-abortion groups in public are cruel and inappropriate for children to see. Camille Scheze, as a volunteer for a mental health organization, says parents might find it difficult to explain the pictures and what happened to their children. She thinks it is even shocking for adults to see those graphic abortion pictures. It is even harder for younger children to experience this campaign. She worries the pictures might bring influence to children’s mental health.

As anti-abortion protesters will continue their campaign in the next few months, pro-choice groups say they will organise counter-protests to protect students and staff.