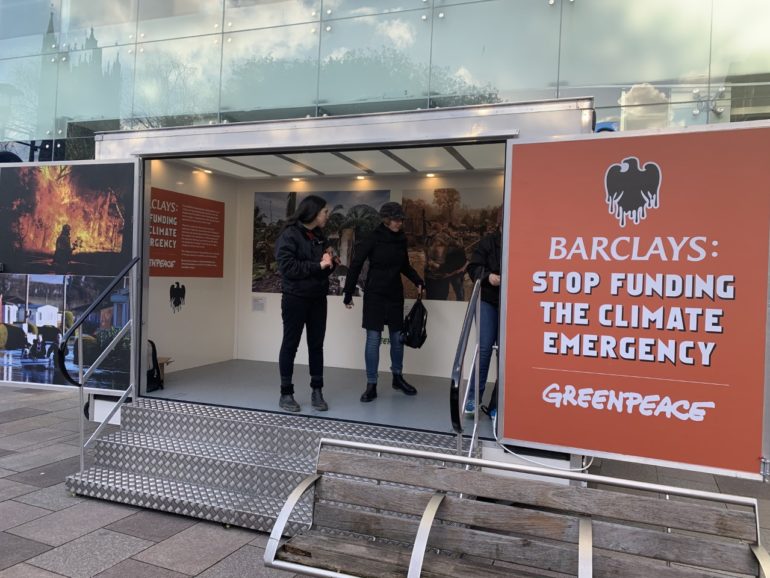 Barclays Shutdown in Cardiff by Greenpeace

Greenpeace targeted different branches across UK to protest against their investment in fossil fuel companies. They blocked the the branches in Belfast, Cardiff, Edinburgh, London and Manchester.

Emily Davis of Greenpeace told Cardiff News Plus that Barclays should stop funding fossil fuel causing climate emergency. They have invested approximately $85 billion in of funding fossil fuels. It is asking Barclays to take back its support from companies and projects that do not align with the Paris Agreement.

But this protest has caused a lot of inconvenience to the customers of the bank. Vijender Singh who has a communication business in Cardiff says “I am affected by this protest as I’m unable deposit and withdraw cash. This has hampered my routinely transactions and hindered the business activities.”

Arbab Cheema a researcher in finance from Cardiff Business School says that closing down of local branches is not going to affect the bank as it the customers and local businesses which are going to be affected by the protest.

A Barclays spokesperson said: “We recognize that climate change is one of the greatest challenges facing the world today, and are determined to do all we can to support the transition to a low-carbon economy, while also ensuring that global energy needs continue to be met.

“Greenpeace has a view on these issues to which they are completely entitled, but we would ask that, in expressing that view, they stop short of behaviour which targets our customers, and our colleagues, going about their lives in communities around the country.”