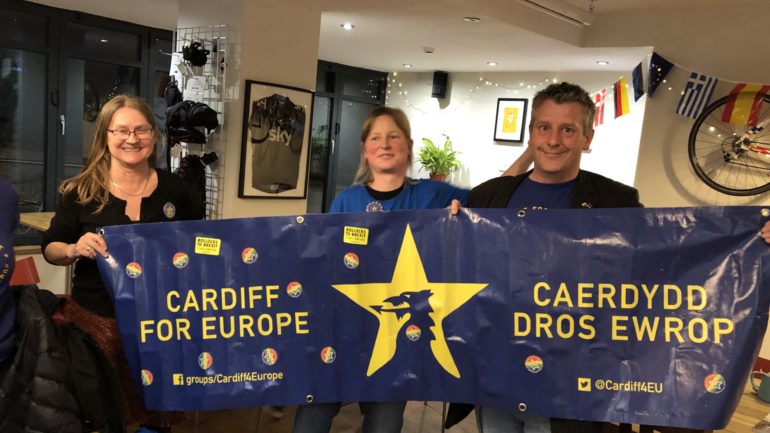 Campaigns have met with EU citizens living in Cardiff to address questions and concerns about the changes to their legal status.

A cafe near Cardiff City Hall has been described this week as ‘The EuroCafé’. There are around 25,000 EU citizens living in Cardiff and as the U.K prepares for Brexit, a ‘This is Our Home’ meeting has been arranged this week to offer support and advice for the new settled status they must apply for to stay in the country.

Organised by the 3Million campaign and Cardiff 4 Europe, as well as EU nationals, academics, demonstrators and legal advisers were in attendance. A key aim of the evening was to offer legal advice to anyone unsure about the new process to apply for settled status.

But some say Brexit has left them uncertain about their future. Suzanna König from Germany says she says she will not be applying for the new settlement scheme and will leave Wales before her legal status is revoked.

“I’ve got a young daughter, she’s eight. She’s known nothing but living in limbo for the last four years, she’s been on so many demonstrations recently she told me she’s going to retire from demonstrating. I think her growing up in limbo for the entire future of her life is not fair on her.”

There was no encouragement for any of EU citizens living in Cardiff to apply for citizenship, but with the deadline for the settlement scheme set for the end of June 2021, legal adviser Chris Desira says any EU citizen living in the U.K should apply even if they do not plan to stay here permanently.

There are no further meetings planned in Wales from The3Million campaign. Cardiff 4 Europe say they know they cannot stop Brexit, so their revised aim is to spread the word that Cardiff is a friendly, welcoming home for EU citizens.