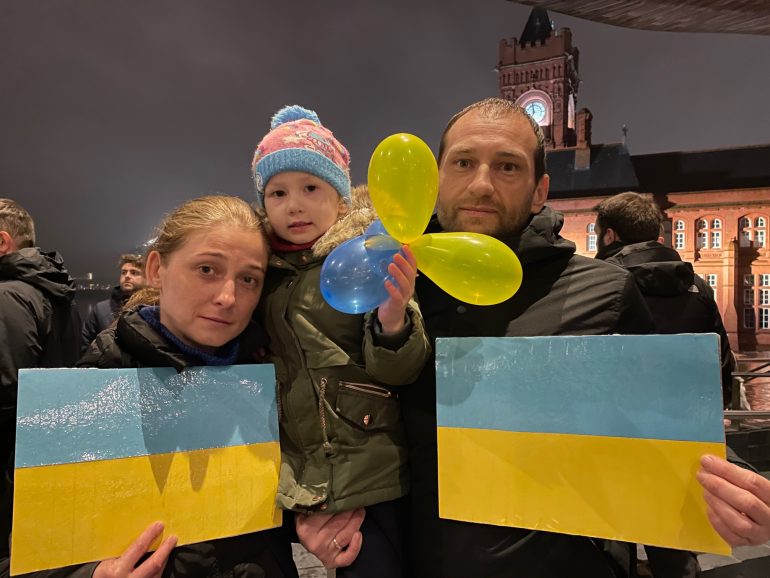 People gathered outside the Welsh Parliament building in support of Ukraine and to condemn Russia’s actions.

More than two hundred and fifty people gathered outside the Welsh Parliament to protest about the war in Ukraine.

Svitlana, who has also been arranging the campaigns, called for full support from the UK government. She says, “People in Ukraine are grateful for all the support from UK. If we stand together, we can prevent the horrible events that might happen. So, I’d like to appeal for people to not watch the news this evening, but to make it”.

The situation is not only affecting people in the two countries. It is also causing an impact on Ukrainians and Russians everywhere else. Anatolie Vasileniuc is a Ukrainian national living in Cardiff. He says, “Putin is a killer. He has destroyed my country, killed my people and has taken the lives of many children. Stop Putin, stop war”.

A majority of Russian nationals have also condemned Putin’s actions. They strongly disagree with his politics. Alexandra Whitham is a Cardiff resident from Russia. She says, “All those who have led to this war including Putin need to be brought to justice”.

The protest carried on across last week. The Welsh government has announced its support to refugees and to anyone who wants to bring their family from Ukraine. Local businesses and individuals across Wales have joined hands to contribute to the aid efforts.