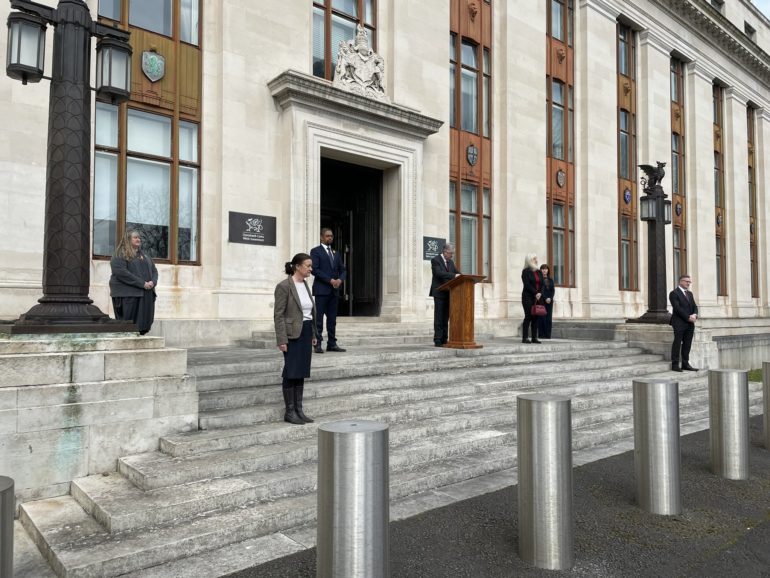 Today is the 23rd March 2021 and across Wales, people are marking one year since the first Coronavirus lockdown began.

First Minister Mark Drakeford led a minute of silence at noon to remember all those who have passed away.

There was a memorial service today at 5pm in Cardiff and at 8pm people are encouraged to stand outside their houses with candles.

At 1.30pm Mark Drakeford took on Adam Price, leader of Plaid Cymru and Andrew RT Davies, leader of the Welsh Conservatives in the final First Minister Questions ahead of the Senedd elections.

You can follow our coverage of the day’s events here and on social media on @BroadcastCJS on Twitter, Instagram and TikTok to view all of our work.

Thanks for joining us

This brings our live blog for today to a close, but be sure to check out our homepage for more detailed coverage of all the stories we brought to you today.

Earlier this afternoon at FMQs Mark Drakeford reflected on the unusually high number of Senedd Members who’ve died over the course of the last term.

It’s almost time for our 4pm broadcast. Your top stories coming up…

Andrew RT Davies reflects on a year of COVID deaths

The question prompts a robust exchange between the two leaders about the affordability and ambition of manifesto promises.

Adam Price asks Mark Drakeford about his biggest regret over the past five years. In response to which Mark Drakeford cites his failure to achieve a better Brexit deal for Wales. He says that although he accepted Wales voted to leave, he wanted a closer relationship with the EU.

Both Welsh Conservative Leader Andrew RT Davies and First Minister Mark Drakeford mention the extraordinary last twelve months in Wales and all those people in Wales who’ve lost love ones in that time.

The First Minister will make a further statement to the Senedd on the issue later.

Mark Drakeford also reflected on the Members of the Senedd who’ve died over the past five years. Carl Sargeant, Steffan Lewis and Mohammad Asghar have all died since they were elected in 2016.

The Senedd is just starting First Minister’s Questions. Aliraza Manji will be livetweeting and we’ll continue to provide updates here.

Expect questions to focus on the fallout of Professor Roger Scully’s Welsh Barometer Poll released yesterday. The poll suggested that Wales is on course for a close Senedd election in just a few weeks time.

He was joined by Health Secretary Vaughan Gething, Julie James and Eluned Morgan outside the Welsh Government’s Cathays Park HQ.

Later today Welsh landmarks will be lit up yellow and they’ll be a national memorial service at 5pm this afternoon.

Newport’s Central Mosque has become the first mosque in the area to give out vaccines to the local community.

It’s providing vaccines to local over 60’s who haven’t yet had the their first dose of a vaccine.

Our team was at the Mosque this morning and will have more on the story at 2:00pm

We’re just coming up to midday when a minute of silence will be observed for everyone who has died from Coronavirus.

Buildings across Cardiff will be lit up this evening to mark the occasion.

Our reporter Meleri Williams will be covering the story throughout the day.

Our reporter Rhys Nelson will have more on this story at 2pm.

Our top stories this morning:

More on these stories later…

Cardiff holds a minute silence at midday to mark a year to the day since the first lockdown began and remember all those who lost their lives from the Coronavirus.

Since the pandemic began, 5,488 people have died in Wales.

Later today at 5pm, there will be a televised national memorial service in Cardiff presented by BBC Presenter Huw Edwards and will include a poem by Ifor ap Glyn, the National Poet of Wales, about the lockdown.

At 8pm tonight it is expected people will stand outside their houses with a candle to commemorate the anniversary.