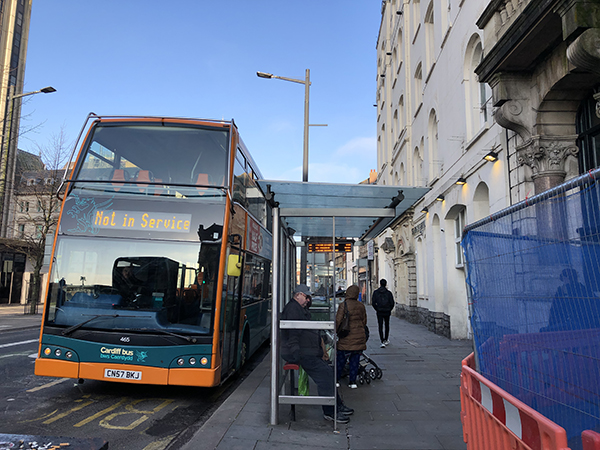 People waiting for the buses in Cardiff. Credit: CNP
LatestNews

Cardiff Bus passengers are complaining that they can’t make their journeys on time because of problems with the company’s app.

They say the APP isn’t giving the right times for services. Cardiff Bus say they are experiencing technical issues with their App.

The Cardiff Bus app is meant to tell passengers when their bus is due to arrive. But technical problems have meant that it has started to become inaccurate. Buses are arriving earlier and later than the app is telling people.

Cardiff Bus transports 100,000 passengers every day on 3,000 journeys in Cardiff, so the inaccuracy of the bus times impacts on lots of people commuting in the city.

Hajira Mohamed works in the NHS. She says the delays of the bus is affecting her journey to work.

Other passengers commented on Twitter, saying they were late for schools and works because of the inaccurate departure times.  There were no times shown at the bus stop. Some say they had to wait for more than twenty minutes without knowing when the bus would come.

Passengers complain about the Cardiff Bus app issue every day on Twitter, but the company keeps responding they are fixing the issue and the buses are running as usual.

Nadeeke is an app developer for Cardiff App Developers. He said app developers should monitor apps regularly so that it can ensure the app runs properly.

Cardiff Bus said on Twitter: “We’re still working with our suppliers to fix the live times issues on our app and at bus stops. Please bear with us as we hope to have this resolved soon.”