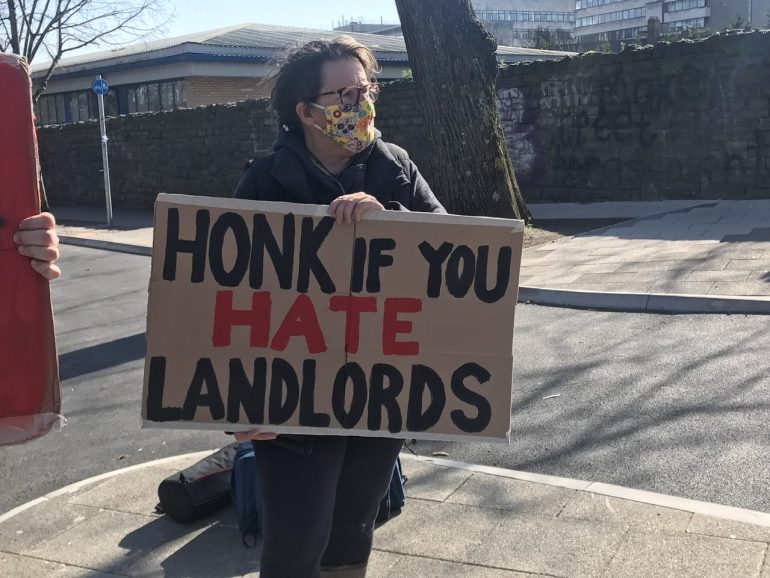 People Have Been Protesting About Landlords in Cardiff

The Association of Community Organisations of Reform Now (ACORN) protested against property owners and letting agents’ demands for a guarantor in order to rent a place.

ACORN Cardiff took to the streets on Sunday to protest against landlords and letting agents who make “unfair” demands from tenants.

The organisation says landlords regularly ask for a UK based guarantor or ask tenants to provide other forms of security.

They launched the protest because one of its vulnerable members, Shirley, tried to rent a property with a property agent in Cardiff.

According to ACORN, Shirley had made an advance deposit payment of £137 to the agent last May. They say she wasn’t given the keys to the house and was sent incorrect paperwork.

Daniel Edwards is the chair of ACORN Cardiff. He says it was important to launch the protest as many of the organisations’s vulnerable members are suffering.

“We hear stories from our members in Cardiff of landlords demanding 12 months rents in advance, this could be 6,000 to 7,000 pounds a month in one go. People simply do not have access to that money in one go” he says.

ACORN was founded in Bristol 2014 and focuses on protecting tenants from property owners and letting agents who are abusing their power. They believe tenants, especially vulnerable tenants, deserve good housing and services from letting agents.

Tenants are saying the demands of property owners and letting agents are directly affecting most vulnerable members of society.

Natalie Bowen is a tenant member of ACORN. She says “If you are an asylum seeker, a refugee or an LGBTQ+ member who is estranged from family and supporting structure, you’re directly negatively impacted by this horrific policy. It’s not okay, it’s deliberately driving some of these vulnerable people into homelessness. ”

ACORN has requested that Cardiff council set up a rental charter to set out fair and equal access to properties for all. They also want landlords in Cathays to sign up to that charter.

ACORN has said more protests would be carried out in the coming weeks if landlords refuse to meet their demands.