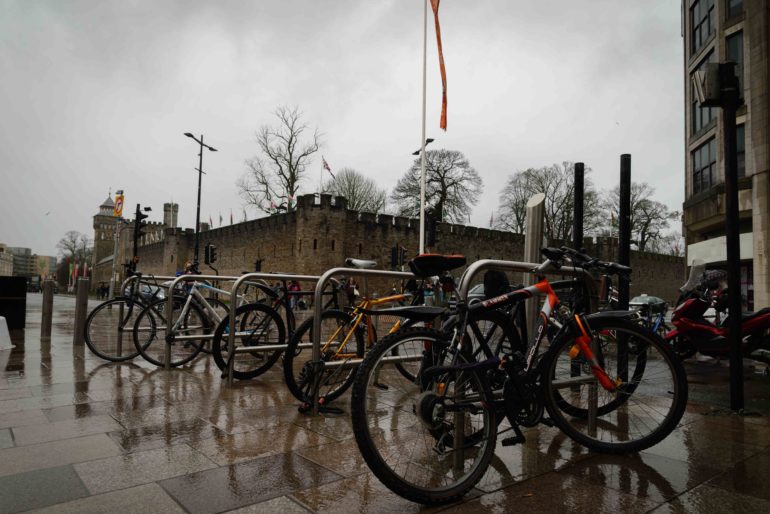 Residents living in Cardiff say they are suffering from a lack of safe cycle storage facilities on the city’s streets. Cardiff is aiming to help the city become one of the UK’s leading cycling cites over the next 10 years. But the current situation is that most people have nowhere to store a bike.

Many cycle halls are too narrow and the amount of shelters are very limited. According to BBC Wales, the number of bicycles stolen in Cardiff has risen dramatically and theft from sheds is endemic.

Because of the insufficient storage places, people are forced to keep their bikes in their own rooms, or just locked up on the benches or advertising boards.

Cardiff Council’s Cabinet backed a strategy to get half of Cardiff’s commuters out of their cars by 2021. One thing that would boost cycling in Cardiff is the provision of secure cycle storage facilities in public areas.

Pedal Power is one of the cycling charities looking to solve the barriers that anyone may face while riding the bike. For example, someone may not be confident, or had a bad experience, or not be able to ride the standard bike around there, especially nowhere to keep and stop the bike.

Sam Farnfield, the manager of Pedal Power, says a more accessible and adaptable storage system is needed to boost cycling in Cardiff.

“One of the biggest barriers for cyclists is the storage problem. Cycling shouldn’t be just pushed into the dark corner of city centre. It should have more accessible storage places and they should be all connected. Cycle storage is a key to get more people into cycling.”

The next meeting will be on this Friday.