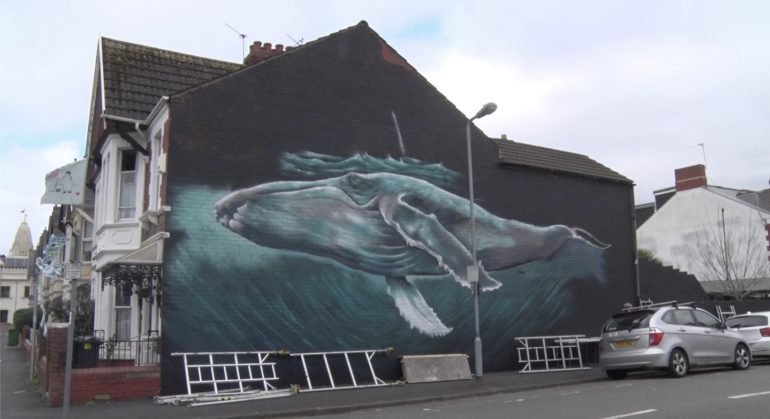 The whale making a splash in Grangetown

Extinction Rebellion hopes a mural of a whale painted on the side of a house in Grangetown will encourage discussions around climate action in Cardiff.

Cardiff was recently ranked as the city sixth most at-risk in the world from global warming, according to recent research by Nestpick.

Extinction Rebellion activist Rob Sage says Cardiff is at risk of flooding in the immediate future if we do not act now.

“We want to get the conversation started and the positive response we have had so far is really great. We hope that it can turn into a bigger thing, like a trail with QR codes.”

This is the first professional piece of street art that the group has commissioned.

Street artist Spike Clark explained what the piece symbolises: ‘’If this area was underwater, which is very close to the river, so it’s very likely the first.

“The top of the whale would be the sea level, and we will then have the Principality Stadium sticking out the top. So that’s what the stadium will look like if water levels continue to rise.”

Carl Fenton, the owner of the house painted by Clark, is very pleased to see the community’s response to the mural.

He said: ‘’It’s crazy, I’ve lived in this house for sixteen years. There’s lots of people that I’ve gotten to know since it being up. Lots of positive conversations. I’ve had no negative reactions towards it so far.”

Extinction Rebellion is hoping that more people will get involved in the painting project as a result of these murals. They are asking members of the public to let them know about houses that could have environmental artwork added to the exterior.

This is part of their wider campaign ‘No Ice Caps, No Cardiff’ which emphasises the impact of climate change in the city centre.

You can view their fundraiser here.