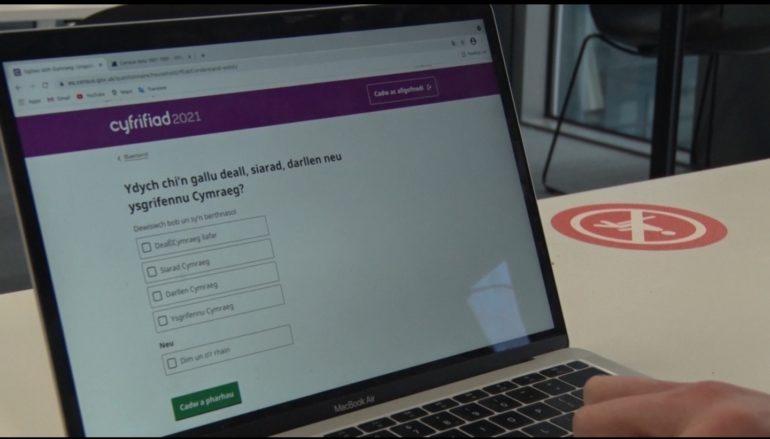 “Will I offend fluent speakers?” Some people not confident enough to tick Welsh speaking box on Census form

Welsh Language Activists are urging people who aren’t confident in their Welsh ability to classify themselves as Welsh speakers on the Census.

Ahead of Census day on Sunday, there are fears that the number of Welsh speakers will drop further, after reaching its lowest number on record in 2011.

Ellis Lloyd Jones from Treorchy has been using TikTok to urge some of his 150,000 followers to tick that Welsh speaking box.

“I’ve got this platform where I can influence people”, says the 22 year old Welsh student.

“I know so many people that have started learning Welsh in the past few years, over Duolingo and in online classes, that would never have the confidence to tick that Welsh speaking box.”

“I’m very passionate about the Welsh Language and so are my followers”.

Since then, the Welsh Government has set a target of a million speakers by 2050.

However, for some, the idea of ticking the Welsh-speaking box is a daunting thought.

“I was quite sceptical to be honest,” says Ryan Beckerleg who is a PHD student in Cardiff.

“I’ve been learning Welsh in online classes for over a year now, but I did consider not counting myself as a full speaker.

“I don’t want to offend any fluent Welsh speakers as my Welsh is not up to their standard.”

There are four boxes to fill in about one one’s Welsh ability in this years census; your speaking, reading, writing and whether you understand Welsh.

But, Cymdeithas yr Iaith, a society fighting for Welsh Language rights says it’s unfair that there are so many options for Welsh speakers.

“There’s an inconsistency in the census. If you speak English, you tick the box. End of. But if you’re Welsh speaker, there are a whole set of questions to answer,” says spokesperson Steve Blundell.

“We encourage people from all different abilities to tick those boxes as long as they have those skills.”

The Office for National Statistics, which runs the census, says a question on Welsh language skills has been included in every census in Wales since 1891.

They aim to create the most suitable questions to monitor the use of the Welsh language.