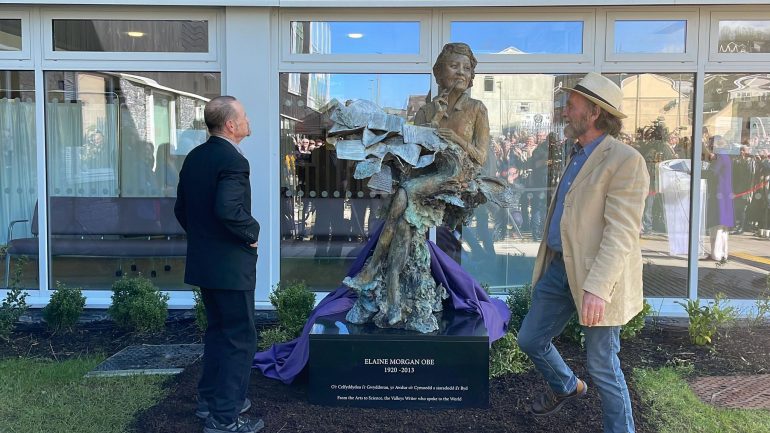 A statue of feminist Elaine Morgan has been unveiled in Mountain Ash. It is only the second statue of a Welsh women to be erected in Wales.

The statue shows Elaine working at her desk surrounded by papers, animals, shells and roots.

Meanwhile, Maindy residents called for better road safety after an increase in traffic accidents at a crossing on North Road, and Cardiff Council announced plans to install six CCTV cameras in Bute Park.

We covered these stories and more below.

Six CCTV cameras to be installed across Bute Park

The cameras will be placed at the entrance to main foot paths.

They are expected to be up and running by April.

The announcement by Cardiff Council comes amidst concerns over women’s safety in the park at night.

Wales’ seven-day infection rate has risen above 300 cases per 100,000 people for the first time since early February, according to data from Public Health Wales.

Cardiff and Vale health board has reported 358 new Covid infections per 100,000 people, according to Public Health Wales.

Cardiff has the most positive cases over the latest 24-hour period with 244.

Residents in Maindy are calling for safer crossings for people trying to get across North Road.

The crossing is less than two metres wide and isn’t considered safe enough to use according to locals.

Wales’ final game of the tournament kicks-off tomorrow in the Principality Stadium at 14:15pm.

Dan Biggar whose set to retain his captaincy will win his 100th cap, while Alun Wyn Jones will earn his 150th cap.

Wales is currently fifth in the table.

The statue of Welsh writer and feminist Elaine Morgan has been unveiled to the public – and here is your first look at the design.

The statue shows Elaine working at her desk surrounded by papers, animals, shells and roots.

Crowds will gather at 12.30pm today outside Tŷ Calon Lân Medical Centre in Mountain Ash for the unveiling of a monument to the Welsh writer, evolutionary theorist and feminist Elaine Morgan.

It will be only the second statue of a Welsh women to be erected in Wales. The first was of Cardiff Bay head teacher Betty Campbell, which stands in Central Square in Cardiff.

The statute of Elaine Morgan was designed and created by sculptor Emma Rodgers, whose works include Liverpool’s statue of Cilla Black.

Cardiff Council will install six CCTV cameras across Bute Park from next month to improve security.

The announcement comes following concerns of women’s safety in the night.

The Victorian market building closed in 2020. It’s hoped the market will be good for the community and that rising living costs – people having less money to spend – won’t put people off coming to the market.