A perfect day in Bath visiting these 5 attractions

Here is how I bathed in the Roman and Victorian history of Bath, on foot in just a day. 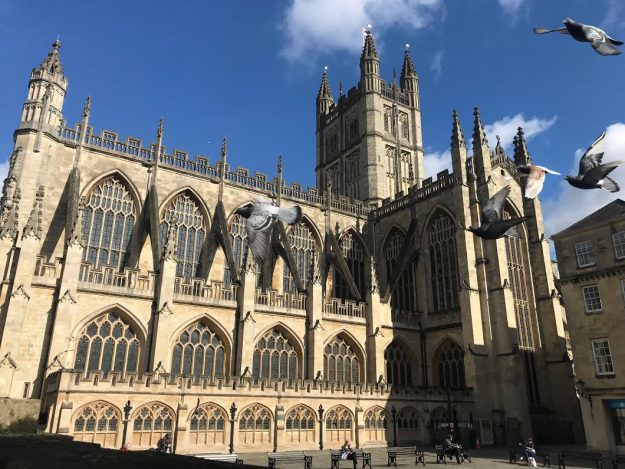 Pick a date, wear you most comfortable pair of shoes and don’t bother packing a bag because you’re going to spend the day in Bath. The petite honeydew tinted town famous for its 18th century architecture and of course, natural hot spring baths. Which is where I headed first as soon as I stepped out of the train station.

It’s true what they say about the Romans, they liked bathing and washing their clothes in a public pool brimming with hot spring water. While the Roman Bath was rebuilt in the Victorian era, the architectural structure and artefacts displayed in the museum, on site teleported me into ancient Roam. With visual and audio assistance provided through out the trip for a fee of £16, I walked out a more enlightened and refreshed traveller than I had entered an hour before. It is easy to lose track of time in between all the awing at ancient remains and the curiosity of finding out from where the hot spring flows.

Nonetheless, the newness of this old town had me yearning for more, and I found myself pacing toward the beautifully constructed church adjacent to the Roman Baths. It wasn’t until I was a few meters away that I realised that not only was the structure beautiful but it was detailed right down to the most minute sculptures, and exterior wall had a different story to tell. Inside of the Bath Abbey was a completely different world altogether. I was greeted at the door by a lovely attendant who ushered me into the church. The interiors are a fascinating mix between Gothic Victorian and Georgian architecture, tombstones and sculptures, dedicate to loved ones from the past, cover each inch of the wall right up to the dome. At a quiet corner of the church is basket where visitors can write down their personal prayers, which will be recited by priests in the next mass. The tourists are requested to contribute £2-£5 towards the church’s maintenance as an entry fee.

As adrenaline pumped and exhilarated as I had walked out of The Roman Bath, I found myself just as calm and composed when Bath Abbey was through with casting it mystical silent spell on me. It took a while for my ears to get use to noise again after the next to mute experience at the church, but once I had adjusted to the world’s music, one distinct sound of gushing water caught my attention, I traced the sound at the back of Bath Abbey and it let me to Pulteney Bridge, towering over the River Avon, the steps on the bridge made the water dance at its surface, the gurgling of the river soothed my soul. It almost cancelled out all the buzz of life around it, even that of the sops lined across the road from it. It most definitely is on my list of the most beautiful bridges I have come across.

Yet another marvel of Georgian era is the massive row of thirty houses, a hotel and a spa, standing tall in a crescent formation facing a large patch of lush green garden is the Royal Crescent. It was built during 1767 to 1774. The locality earned its title of royalty after Prince Fredrick, the Duke of York and Albany had stayed there in the 18th Century. The sight of this iconic infrastructure puts the traveller in the shoes of a flâneur, observing the everyday life around this grand locality with a rich past.

On the way to and from, I stumbled upon the Circus. Much like the Royal Crescent, this too is a residential area, limestone townhouses lined in perfect symmetry around a garden that’s home to three old trees. The locality has three corridors to it. One of which leads to the Royal Crescent and the other to the town’s market area. A 360 degree view of The Circus is inspired by Stonehenge in Wiltshire.

After an exiting day around town, there is nothing more that could bring this trip to an ideal end than a scrumptious dinner at a petite hidden gem tucked into the corridor connecting The Circus and the Royal Crescent. Named after it’s adjacent neighbourhood The Circus Restaurant has a wide variety of items to choose from. I had ordered Algerian Spicy Lamb Patties and must I say, it was the most tender of lambs I have had. Crunchy on the outside, the bits of lamb instantly melted when devoured on. Apart from lamb the restaurant receives high praises for its Flat iron steak and Crab bisque. There are a few good options for vegetarians and vegans at the restaurant too. A meal at The Circus cost me £20 with beverages.