Ash Wales, an anti-tobacco organization, is creating awareness about the dangers of illegal cigarettes

In December 2015, a team of five, including of a sniffer dog and police officers, drove towards a small convenience store in mid-Wales. Steven Hay, a consultant with trading standards department, was one of the persons leading the group. He had earlier received information about the store-keeper selling illegal tobacco.

“On inspection, we found that he had stored the stuff in a collared-out area above the door. He had thought the dogs couldn’t sniff that out,” says Hay. The store-keeper was arrested and later found to have had a prior conviction for selling illegal tobacco.

Hay has made several such crackdowns in the course of his career at trading standards spanning 20 years. The chief reason for the prevalence of illegal tobacco, he says, is socio-economic. “A pack of cigarettes with 20 of them costs anywhere between £6.5 to 8. A pack of illegal tobacco, however, is available only for £4,” says Hay.

The proposition of higher profit margins and lack of government regulation also attract sellers to get in the business. According to World Tobacco Atlas, United Kingdom is the third most expensive country for smokers that worsen the situation. Nearly 80% of this price is on account of taxes. 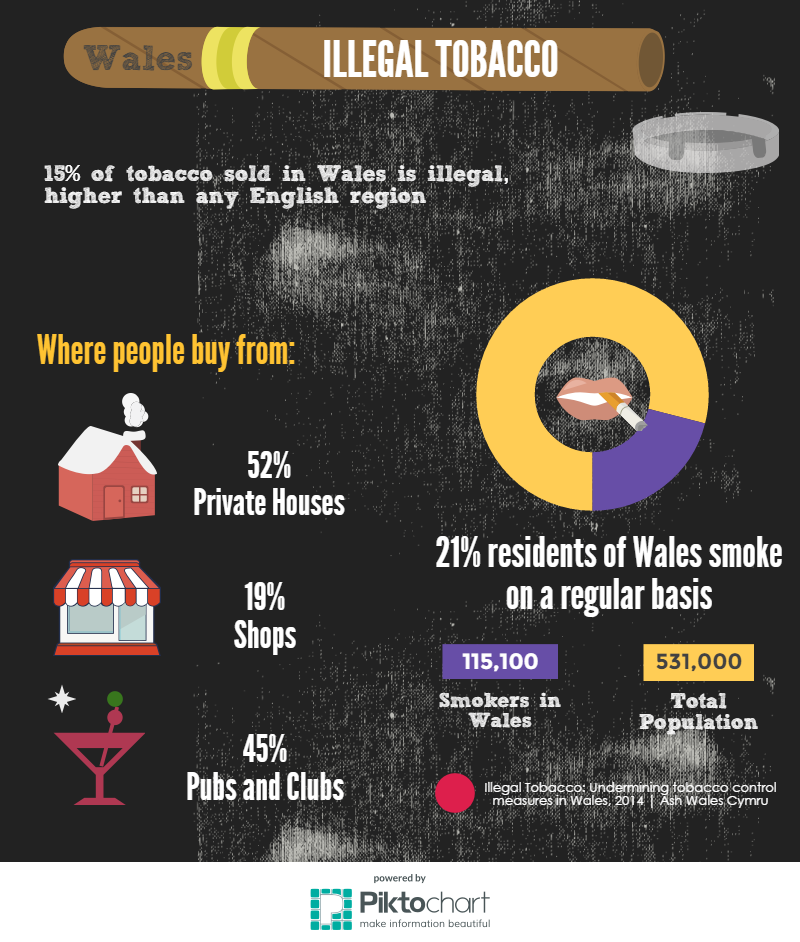 In 2014, the Cardiff-based anti-tobacco organization Ash Wales studied the behaviour of nearly 2,500 people across 22 local authorities in the country. The study found that nearly 21% of the population or 115,100 people use cigarettes, of which nearly a quarter have bought them illegally. Nearly twice as many have been offered illegal tobacco.

Illegal cigarettes can be classified into three broad categories: the ones that are smuggled, ones that are manufactured specially for black markets, and ones that look similar to the brands but are fake. According to Ash Wales’s survey, about 52% of consumers bought these from private residences whereas pubs and shops sold to 45% and 19% respectively.

“Smoking illegal tobacco is considered a fairly low key criminal activity. Some people don’t even consider it to be a crime. Often, children get access to the illegal tobacco as the sellers don’t care about the age restrictions,” says Abe Sampson, campaign assistant with the organization.

But fake cigarettes are often much more harmful than legal ones. Several reports highlight the presence of increased amounts of tar, asbestos and at times, human excrement in these cigarettes. In 2010-11, the home ministry declared that it cost them £3.6 billion worth of revenue in the year 2009-10.

Ash Wales plans to reduce the consumption of illegal tobacco from 15% to 12% within the next three years. In order to do so, the organization launched a ‘Commit to Quit’ program on No Smoking Day on 9 March, aimed specifically at youngsters. The organization also holds outreach programs aimed at the masses to raise awareness and gather information about sales of such substances in the UK.

“A lot of information regarding illegal tobacco comes from the public. So it is incredibly important that we get a constant stream of information,” says Sampson.

In case you have any information about illegal tobacco sellers, contact Ash Wales at 029 2049 0621.

Rate of smoking across Wales