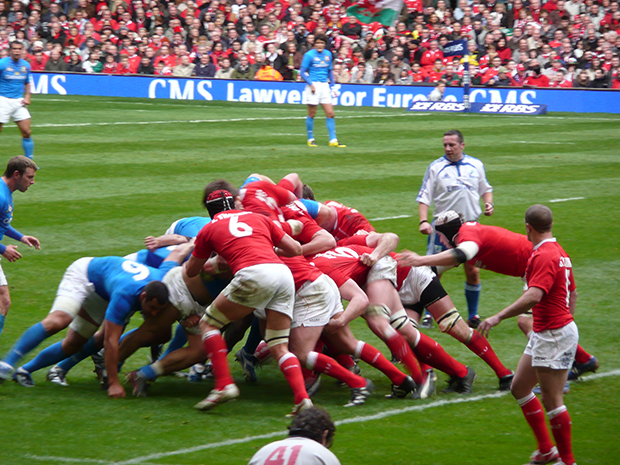 DEFENDING Six Nations champions England may suffer during this year’s tournament because of their poor domestic form in the European Challenge Cup, says Warren Gatland.
Only London-based Saracens got through to the quarter-finals of the European competition, with four of the other six English teams finishing bottom of their pools.
“I look back on the form of English clubs in Europe and think that when they have five teams in the quarter-finals, you are looking at a pretty strong England squad, said the Wales coach.
“You look now and they have one club, which qualified in eighth place. There start to be some question marks from my point of view and, I hope, my players. It gives you a bit of confidence and self-belief.
“We have a number of players from the Scarlets who became the third team to qualify for the quarter-finals after losing their first two matches, outstanding in Bath and then showing character against Toulon.
“They came into the squad with a spring in their step and that filters through to everyone else.
“I can understand it from Eddie (Jones)’s point of view because players are probably quite happy to get away from their clubs because they are coming back into an environment in which they are used to winning. They can mentally park their club form.”
Wales will have to get past Scotland first, before turning their attention towards England.
Following a successful autumn test series, seeing them narrowly lose to New Zealand and thrash a tough Australia team, Scotland will be looking to open their Six Nations strongly by winning in Cardiff.
Wales have not lost to Scotland at the Principality Stadium for 16 years but, after Scotland convincingly beat them in last year’s competition at Murrayfield and finished above them for the first time since 2006, Wales will not underestimate the Scots’ ability.
Scotland will be going into the Six Nations thinking they can win the competition and coach Gregor Townsend has asked his team to believe in themselves.
In an interview last week he said: “Every team goes into this championship believing they can win, it’s the whole reason we are here.
“We’ve got to set high standards, high ambitions for our team. We believe in them but we also know the hard work that has to go in to make that happen.
“There’s only five games in the championship. Teams that do well obviously win four or five games. We know we’re going to have to play very well in each of those five games to win.”
When asked if Scotland could win the Six Nations, Townsend replied: “I don’t see why not.”
Team News
It’s almost easier to list the players that are available, with both Wales and Scotland suffering a long list of absentees.
Wales are missing spot kicker Dan Biggar (shoulder), number 8 Taulupe Faletau (knee) and captain Sam Warburton (knee).
Backs Rhys Webb  (knee), Rhys Priestland (hamstring), Liam Williams (Abdomen) and Jonathan Davies (foot) are all missing as well as Dan Lydiate (bicep) and Jake Ball (shoulder).
Gatland will also be hoping that George North passes a late fitness test, despite pulling out of the warm-up of his Northampton match last week.
Scotland have their own long list of missing players. Second row, Richie Gray (calf) is the biggest miss for the Scots.
The Scottish front row has taken the largest hit with hookers George Turner (MCL), Ross Ford (chest) and Fraser Brown (knee) all missing.
Props Zander Fagerson (foot), WP Nel (broken arm), Darryl Marfo (back) and Allan Dell (back) are all injured and Simon Bergham is suspended.
Prop forward, Al Dickinson is also injured and centre, Alex Dunbar is questionable after suffering a concussion last weekend.