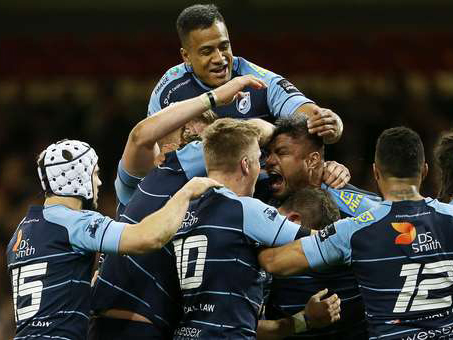 Blues boosted by Navidi deal ahead of Southern Kings clash

CARDIFF BLUES coach John Mulvihill says his side have the character to claim a play-off spot, ahead of their clash with Southern Kings at Arms Park tomorrow night.
Last weekend, his team was training 14-0 at half-time against Edinburgh but came back to claim an unlikely 19-17 win in an enthralling fight-back.
“We certainly didn’t start that well and at half-time it wasn’t looking great. It was a very quiet changing room, but the boys turned it around,” he said.
It is that character that has Mulvihill believing in a positive end to a season that has, so far, been inconsistent.
His team are now level on points (42) with Connacht, who face fellow play-off chasers Ospreys on Saturday, and Mulvihill is eyeing a potential gap between them and those beneath them in the table.
“We said all week that a win (against Edinburgh) could sit us in third and games went our way the night before, so now it’s important that we go on with it,” he said.
“Destiny is in our own hands and if we get a good win this weekend, we will be five or seven points ahead of one of our rival teams.”
The Southern Kings sit bottom of Conference B having conceded 59 points to Leinster last time out, but the Blues coach is aware that they are not to be taken lightly.
He added: “We need to focus on our start because that’s one of the things that has been letting us down.”
The game comes after Wales’ Six Nations flanker Josh Navidi signed a new deal at Arms Park.
“Josh is an awesome player and has been a legend for Cardiff Blues, so it is great to retain his services,” said Mulvihill.
Navidi, 28, has made 169 appearances for the Blues, and has signed a deal despite doubt over the Blues’ regional future.