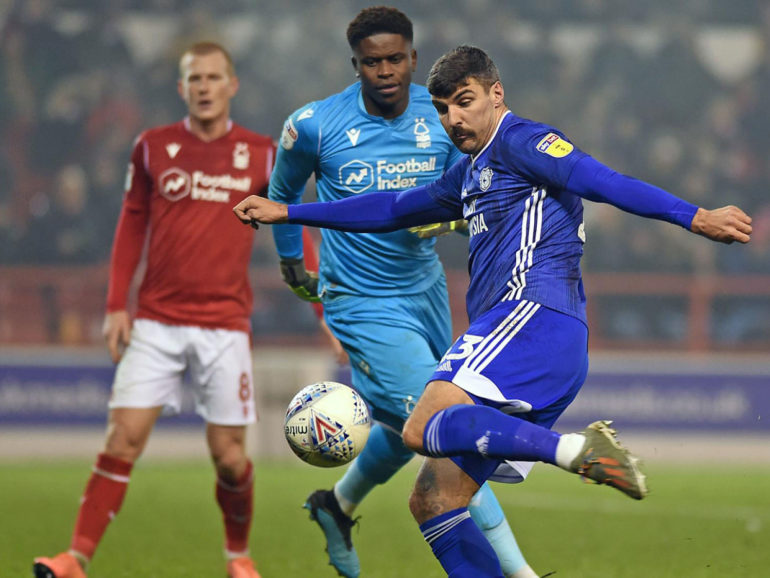 CARDIFF City will be looking to get back to winning ways in the Championship tonight as they host play-off rivals Nottingham Forest.

The Bluebirds fell to a shock 2-0 loss away to relegation-threatened Stoke on Saturday, with former Swansea midfielder Joe Allen scoring after Callum Paterson headed into his own net.

Neil Harris’ side had only lost once in eight league games before their visit to the bet365 Stadium, but the City boss said his players must move on from the disappointment if they are to challenge for a coveted play-off spot.

“If we are serious about pushing for the top six, we have to put Stoke behind us,” said the Cardiff boss yesterday.

“It was only our third defeat in 22 games, but you have to quickly realise with 12 games to go that you have to put results like that to bed quickly and put it right.

“We are six points still off fourth place, that’s the reality of it.

“Even losing at Stoke, because we have been on such a good run, we are close to it, but we have to get back on another run.”

Tonight’s game against Forest is the first big test of a tough end-of-season run-in for Cardiff, who face top-six opposition in Brentford, Leeds and Preston North End over the next three weeks.

Sabri Lamouchi’s side sit fifth in the Championship table, but are winless in three games, drawing with leaders West Brom, before losing to Charlton and enduring a frustrating stalemate against QPR at the weekend.

The Reds could have quite easily fallen to defeat on Saturday had it not been for goalkeeper Brice Samba, who has barely put a foot wrong between the sticks since arriving from French Ligue 2 club Caen last summer.

The 25-year-old has the second best clean sheet record in the league, with 11 in 30 games for Forest – only Leeds and former Real Madrid shot-stopper Kiko Casilla has more.

However, he may have been put under strain in Cardiff tonight had the Bluebirds not been dealt a huge injury blow last week, with Lee Tomlin suffering a serious knee injury during training.

The talismanic attacking midfielder now faces between six and eight weeks on the sidelines, and will therefore miss a significant chunk of City’s run-in.

Tomlin has been one of the Bluebirds’ most important players this season, contributing seven goals and as many assists.

The playmaker’s absence was evident against Stoke as his team failed to create any meaningful chances in attack.

Speaking to the club’s website, Harris admitted that the 31-year-old’s injury is a disappointing setback for the club.

“He’s going to be out for six to eight weeks unfortunately,” the City manager said. “We wish him well.

“It’s a blow to lose someone with the quality of Lee. Now we need others to take this opportunity.”

However, Joe Ralls could return to the squad after missing four games with a glute injury, with the midfielder watching the Stoke defeat from the bench.

Forest have injury problems of their own, however, with three key players likely to be absent as they travel to South Wales.

Midfielder Samba Sow may miss out again with a recurring knee problem, while questions marks remain over striker Lewis Grabban and winger Sammy Ameobi, who are struggling with knee and hip injuries respectively.

City will host Lamouchi’s side tonight in a clash that could have serious ramifications for their play-off hopes.

A win for Forest wouldn’t be the first time that they have dented Cardiff aspirations, with the Nottingham side costing the Bluebirds the First Division title 97 years ago.

In the 1923-24 season, Cardiff went into the final day as leaders needing a win against Birmingham City to secure the club’s first top division title.

Their main competitors Huddersfield Town faced Forest, knowing a slip up by City and a win for them would see the league decided on goal average.

Goal average, which divided the number of goals scored by the number conceded, was the system used until 1976 before the current goal difference.

Cardiff could only manage a draw, with the club’s greatest ever goal scorer Len Davies, who struck 24 times that season, missing a penalty.

Huddersfield ran out comfortable 3-0 winners against Forest, but it was two late goals from the Terriers that meant they overtook the Bluebirds at the summit.

The 1923-24 campaign remains the slimmest margin that England’s top-flight title has ever been decided by, with 0.024 of a goal separating City and winners Huddersfield.

Doug Thomson, 54, writes for the ExaminerLive in Huddersfield and said the majority of the 19,000 Terriers’ fans stayed after the game to hear the City score, likely via telegram.

Huddersfield went on to complete a hat-trick of consecutive First Division titles, with Mr Thomson crediting manager Herbert Chapman for bringing “free-flowing attacking football” along with a “solid defence”.