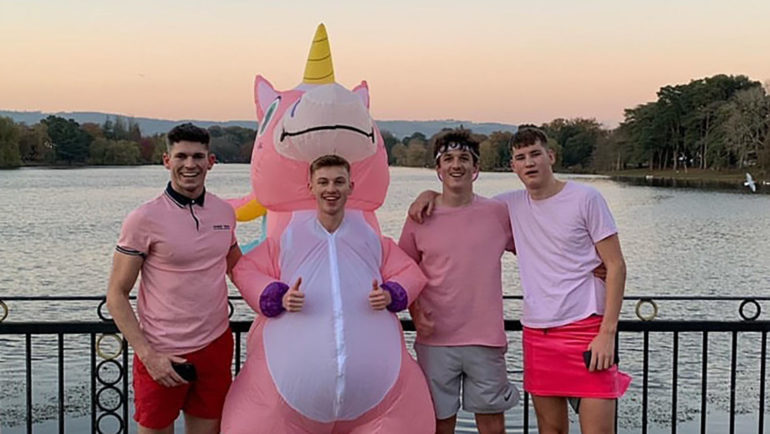 The unicorn is Cardiff University student Alex Line, who decided to run between 5-15km every day to raise money for cancer charities after his friend’s mother passed away due to breast cancer.

What originally started as a way to raise awareness for various cancer and mental health charities, has morphed into a fund-raiser for Sue Ryder after an overwhelming response from the public.

Alex, 19, said: “So many people go through so much worse than dressing up in a unicorn costume and running around Cardiff. If I can do that, then at least I feel like I’m actually doing something.”

According to Cancer Research UK, 1 in 2 people will get cancer at some point in their lives.

Alex has experienced this statistic first-hand. At 16, he was hospitalised with Pancreatitis and doctors told him he could be developing a cancer in his back. Luckily it was an easy fix.

“I understand that fear and I wouldn’t want anyone to go through that,” he said.

In a cruel twist of fate, four days ago Alex also found out that his grandad has prostate cancer. Instead of letting this get him down, he is using it as added motivation for his fund-raiser.

Alex is running all over Cardiff every day in November. You might see him in Bute Park, Roath Park or the City Centre as he runs somewhere different every day to increase exposure.

He is not always alone – his housemates have been running with him in pink outfits and other members of the general public have requested to join in.

“It’s become something I’m really proud of. More than just about me trying to help a friend out and trying to raise awareness… [it’s] become now a community people are all getting behind and wanting to get involved in,” he said.

There have been many challenges for Alex. Two weeks in, the Unicorn costume ripped. Slaloming past Christmas shoppers, Alex clipped a road sign, ripping the suit at the leg. He ordered another suit and is back on the streets running today.

To make up for the days off, he plans to extend the distance of his upcoming runs and is even running a marathon on the final day (November 30th).

Alex is no stranger to physical challenges for a good cause. Earlier this year, during lockdown, he ran 574km with a 15kg vest in 30 days to raise money for five charities: BLM, NHS, Environmental Defence Fund, WWF and Rosa. He raised £2,000.

He said: “I need to put myself through a little bit of pain, physically or mentally and challenge myself. Otherwise, for me, it doesn’t feel like I’m sacrificing anything for anyone else […] the physical challenge as well as the mental challenge is what is driving me to keep going.”

So, what is the best part of this challenge? Hearing other people’s stories apparently: “Having lots of people who I never would have spoken to or interacted with ever in my life come to someone they don’t know and open up and speak about their own personal stories that they’ve been through – that’s been quite special.”

You can donate to the cause here:

Look out for Alex around Cardiff throughout November.