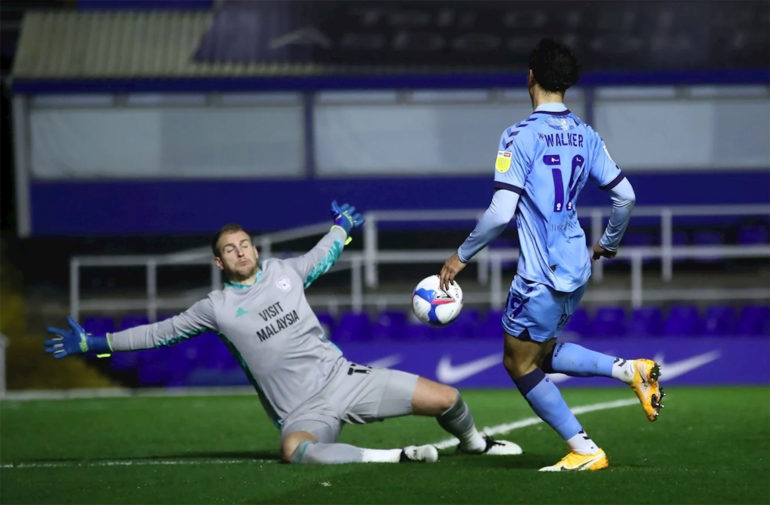 Bluebirds lose unbeaten away record after stumbling at Coventry

Cardiff fans disappointed by 1-0 defeat on the road

COVENTRY scored early in the second half last night and Cardiff just couldn’t get back into the game.

“We didn’t do enough with the football to hurt the opponent often enough,” said Bluebirds manager Neil Harris after the game

Harris made one change in the side he put up against Millwall, with Josh Murphy coming in for Robert Glatzel as Kieffer Moore’s strike partner.

Joe Ralls and Marlon Pack linked up in the midfield for the third game in a row.

It was a nervy start for Cardiff as Coventry almost opened up the scoring in the 11th minute. Hamer put a lofted diagonal ball into Jordan Shipley, but Sean Morrison managed to get enough on the ball to stop the attack and allowed time for Smithies to leave his goal and snuff out the follow up from Shipley.

Coventry started strong, bringing players forward and putting bodies in the box, the Cardiff defence managed to deal with most of the high balls put into their box.

Ryan Giles, the Wolves loanee managed to put in a strong shot on his favoured left foot, but Smithies managed to collect with relative ease.

Cardiff were unlucky not to be 1-0 up in the first half after an own goal from Coventry was ruled out when the referee thought he spotted a foul in the box.

Neither side made a change at the break, Cardiff looked to score early after fullback Joe Bennet put in a driven ball, but Josh Murphy couldn’t get onto the end of it.

Coventry’s Hamer almost opened up the scoring with a diving header but fired it straight at Alex Smithies.

Coventry managed to break through and open up the scoring in the 54th minute, Striker Tyler Roberts capitalised on an awful defensive mistake from Cardiff city as Ralls put in a weak pass to Morrison. Roberts came in from behind Morrison dispossessed him and calmly loft the ball over Alex Smithies in goal.

Roberts was close to making it two just one minute after but fired the ball wide.

Harris brought on two substitutes in the 58th minute to try and get back into the game. Murphy came off for Glatzel after a disappointing stint in front of goal. Sheyi Ojo replaced Junior Hoilett on the wing.

Marlon Pack was swapped out for Welsh national Will Vaulks in the midfield in the 66th minute.

In the 74th minute Ralls put in an enticing ball form the corner flag, but Moore headed it straight into the hands of Coventry’s Marko Marosi.

Coventry swapped out Gustavo Hamer for Callum O’Hare for a boost in the midfield and later replaced Jordan Shipley for Norwegian international Leo Skiri Østigård on the wing.

Cardiff just could not seem to get an attack together in the dying moments of the game, this frustration was highlighted by Harry Wilson’s Clumsy tackle on Coventry fullback Fankaty Dabo in the attacking third, leading to a yellow card.

Coventry’s Marko Marosi was taken out of goal with a head injury after clashing with Sean Morrison. Ben Wilson replaced him.

Joe Ralls was subbed off for Mark Harris in midfield in added time.

A late attempt from Giles was rolled wide and the game ended after Joe Bennett was caught offside in the last attack of the game.

“We didn’t do enough with the football to hurt the opponent often enough. We’ve got a talented group of players that need to show more,” said Neil Harris after the game

“The goal probably sums us up and we were masters of our own downfall giving the ball away cheaply.

“We’ll look forward to Saturday and the opportunity for us to turn it around.”

After failing to gain a point yesterday Cardiff drop to 18th in the Championship table and lose their unbeaten away record.

The Bluebirds face Luton Town on Saturday and fans will crave a better result than last night’s if they plan to watch their team climb up the table.