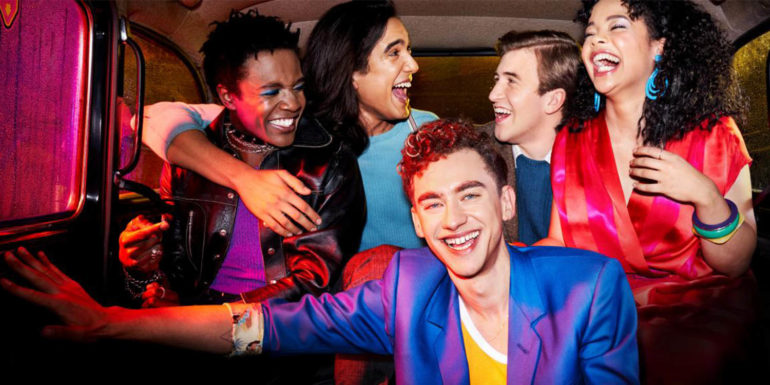 ACCORDING to Channel 4, It’s a Sin has received a record-breaking 6.5 million viewers on the online streaming service All 4.

Written by Swansea-born Russell T Davies, It’s a Sin is a stark reminder of the Aids epidemic of the 1980s and the tremendous progress that has been made since.

In the UK, 106,000 people are currently living with HIV, and 92% of these are on effective treatment.

Mr Doughty is chair of the All-Party Parliamentary Group on HIV and Aids.

“Today we live in a country that has not only seen huge progress and leadership from our Welsh Government on HIV/Aids but as we begin LGBT+ History Month, we have leaders in Wales who are vocally supportive of our LGBT+ communities,” said Mr Doughty.

For Mike Phillips, who was a young man during the 1980s, the heart-breaking depiction of the Aids epidemic in the TV show hits very close to home. Mike was diagnosed as HIV positive at the age of 23.

“By the time I turned 25, I had lost 50 friends, I stopped counting at that point. A lot more death came after that, but I couldn’t even tell you the number,” said Mike, who’s originally from Swansea.

Mike, now 53, describes his diagnosis as the beginning of his new life, a life with HIV.

He was studying at the Royal Welsh College of Music and Drama at the time of his diagnosis, but abandoned a career as an actor, viewing HIV diagnosis as a death sentence.

“Many of us gave up on our dreams during that time,” said Mike.

“Sometimes we would have periods where we were at a funeral every week.”

Mike was rejected by his mother and father for being gay and contracting HIV, so his friends became his family, much like the friendships depicted in It’s a Sin’s Pink Palace.

“Lindsey, who was with me when I got my diagnosis, called me little bro and I called her Big Sis. My best friend from back home, I call her my soul sister. And I’ve got so many sisters and so many brothers as well.”

After one episode of It’s a Sin, the hashtag #BeMoreJill trended on Twitter, praising the importance of allies of the LGBTQ+ community.

“One of my best friends from drama school, she was my Jill if you like. I’ve had lots of Jills along the way”, said Mike.

In 1994, Mike and his friend Martin Nowaczek planted a tree, known as the Red Ribbon Tree, in Gorsedd Gardens as a memorial to those who died of Aids in Wales.

Not long after, Martin died of Aids at the age of 27.

“Throughout the years when somebody’s lost someone to Aids, they tend to go to the tree, or they might put on a ribbon every World Aids Day,” said Mike.

In future, Mike hopes the UK will have an official memorial dedicated to those who have lost their lives to Aids.

“Seeing Martin literally waste away and die in front of you, it was horrendous. Horrible. You can’t forget that, it’s kind of always there, at the back of your mind”, said Mike.

“It’s more than the loss of a friend. Martin was like a brother to me.”

Before Martin’s death, together Mike and Martin founded the charity Cardiff Body Positive in 1991.

It has since folded, but Cardiff Body Positive supported those who were HIV positive and their loved ones during a difficult time.

The charity’s aim was to eradicate the stigma and raise awareness that HIV could affect anyone.

Mike is now a trainer and consultant in dementia care and lives in London.

Mike was also a former national treatment officer for the Terrence Higgins Trust, and became a voice for those who are HIV positive.

“We’re not victims, we’re not sufferers. We are people living with,” Mike said.

The Terrence Higgins Trust was a charity set-up in memory of Terry Higgins who was one of the first people to die of Aids in the UK.

Terry was originally from Haverfordwest and died of Aids in 1982 at the age of 27.

“My partner and I have been together 30 years, we are now married, that wouldn’t have been possible back then.”

As well as LGBTQ+ rights, HIV has had a significant impact on medical research, according to MP Mr Doughty.

“The scientific advances in HIV treatment and prevention have been some of the biggest we’ve seen in modern medicine,” he said.

“A HIV diagnosis has gone from being a near-death sentence, for sadly far too many, to a manageable condition, with people living with HIV having a normal life expectancy.”

Those living with HIV now can take treatment medication that reduces their viral load and eliminates the possibility of them transmitting the virus.

Mr Doughty supported the initiative for Cardiff to become a Fast-Track City, a scheme aiming to eradicate HIV transmissions by 2030.

He says Wales has led the way with providing access to PrEP, Pre-Exposure Prophylaxis, medication taken before and after sex to prevent the transmission of HIV.

PrEP is available for free on the NHS at sexual health clinics in Wales. More information on where to get PrEP can be found at Frisky Wales.

According to Mr Doughty, late diagnosis could be due to the stigma attatched to HIV and therefore reluctance to get a test, in addition to the lack of understanding of the risks of HIV.

“If anyone in Wales feel they are at risk of HIV, they should get tested,” he said.