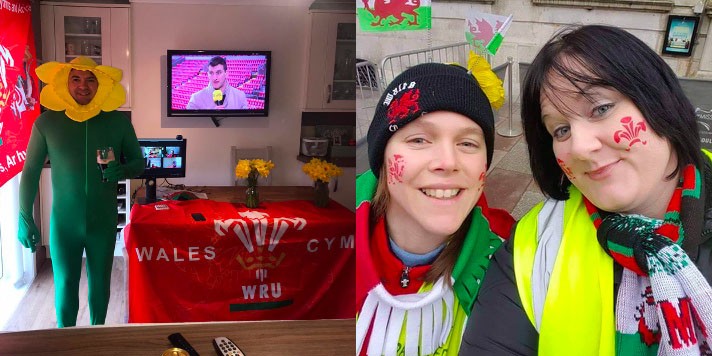 How Wales’ biggest rugby fans are coping during lockdown

IT has almost been a year since the Covid-19 pandemic shut down the sporting calendar.

Although the Six Nations Championship has restarted, it will be a very different tournament this year with empty stadiums and deserted pubs.

Like the rest of the world, lockdown has forced many rugby fans to get creative when watching the tournament at home.

Meet Lee Llewellyn and Irene Quelch, two of Welsh rugby’s biggest followers. They have revealed how they are making the most of it this year, despite the pandemic.

In a normal world, the Guinness Six Nations is the best time of the year for Irene Quelch and her face-painting business.

But, for the first time in six years, she is not on the streets as a matchday face painter. Instead, she is watching the tournament from her living room in her home in Caldicot.

“I made sure that lunch and tea was timed to perfection! The TV was on full blast and I told everyone not to ring our house during the game. My son couldn’t take his eyes off the TV screen during the second half!”

During the home matches, Irene would normally be at her spot on St. Mary’s Street, painting the faces of thousands of Welsh fans.

“The buzz you feel on the streets – you can always tell from the fans and the energy they give off. You can tell by the atmosphere that it will be a good or bad game. Cardiff is just the best place for rugby.

“One year we had a flash mob surprise us which was just spine-tingling. There was a little boy and a guitar one year who was playing in memory of a loved one. The atmosphere is just so friendly and I meet so many people every year. Everybody has a story for being at a Cardiff home game!

“It just seems really sad that the sound blaring around the stadium was all pretend, and being Welsh we just love singing! To not have that behind the team is just a bit sad.

“When the Six Nations abruptly stopped last year, it took all the fun out of it. I couldn’t even finish watching the tournament. But now with it being back, it’s nice to have something to look forward to.”

Irene also paints faces at weddings and children’s parties, which she has managed to keep running. In between the different restrictions over the past 12 months, she has only managed to work at two outdoor tea parties.

“I am hopeful that things will be better next year. We just need to be patient, don’t we? I’ve always loved rugby and our win against Ireland totally cheered me up during lockdown.”

While every business has suffered at the hands of the pandemic, one of Wales’ biggest rugby fans will not be wearing some of his iconic costumes this year on Cardiff’s streets.

Lee Llewellyn, from Neath, would normally be dressed up as a dragon or a daffodil with his friends during the tournament. Despite watching the tournament from home, he hasn’t let restrictions spoil the Six Nations excitement.

“The Six Nations has given us something to chat about with people, whether it’s via Zoom or other platforms. It is something to look forward to and focus on because we can’t go anywhere.

On Sunday, I logged onto a zoom meeting with a group of friends during the first game and watched the build-up with a pint of Guinness. We’ve tried to keep it the same if anything!”

“Everyone in Wales talks about rugby and that’s what I miss the most. I miss going into the office and discussing the build-up to the games, you talk about the team selection, you talk about how the England team is looking.

“Also, it’s not just the rugby match – it’s the whole day. You get together with friends, go for a drink, meet other people that you’ve met over the years. That’s the whole point of the Six Nations – the togetherness.

“We had all originally booked tickets to Edinburgh, Rome and Paris this year, and I’ve even got tickets to South Africa for the Lions Tour this summer.

There’s a light at the end of the tunnel. I’m open that we may get to see one Autumn game. In the meantime, I’ve got so many outfits I’ll probably put on a different one each week for a laugh, otherwise you’re just sitting in the house bored watching another game.”

Once live audiences return to international sporting events, hopefully people like Lee and Irene can come together to make the world a more harmonious place.