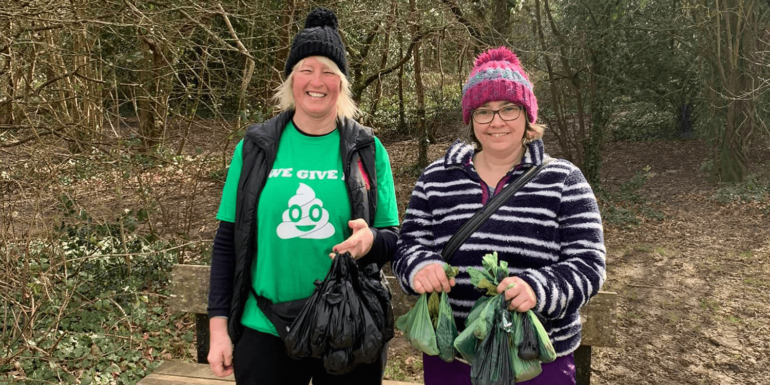 CARDIFF dog walkers are coming together to pick up dog mess and keep the city’s green spaces clean.

Nikki Warner, who runs Llanishen-based dog-walking business Reservoir Dogs, formed the group, called ‘We Give A 💩’, after noticing the problem of dog fouling was growing.

“I had been thinking about it for a while,” Mrs Warner, 44, said. “I was seeing more and more posts on Facebook from people saying how there’s so much dog fouling in certain places. I see it too when I’m walking dogs.

“As professional dog walkers we pick up poo from different dogs all the time so it’s not as if it is something we’re unused to. It’s a way to give back to the community.”

The group was originally made up of just professional dog walkers across Cardiff, but has grown quickly, with around 140 people now in the Facebook group. Pet owners have got involved, not just in the city but in Caerphilly and Swansea too.

Mrs Warner, from Llanishen, is keen to encourage people to pick up their dog’s poo at all times, but the group are holding mass poo-picking-up sessions on the first Saturday of every month. The first of these took place on March 6.

“At our first ‘blitz’ at the start of the month, a couple of us went to Rhydypenau Park,” Mrs Warner said. “We picked up about 40 odd poos and another group did about the same. It’s absolutely awful.”

Mrs Warner suggests that part of the problem is the lack of bins in parks, making dog owners more reluctant to pick up or more likely to use the ‘stick and flick’ method (where people throw their animal’s mess into undergrowth) instead.

“We’ve spoken to members of the public and they say they don’t pick up because there aren’t any bins,” she said. “But we just bag it and carry it. Sure we might stink but you can’t get too close to anyone now anyway!”

In 2019, Cardiff Council introduced a maximum £100 on-the-spot fine for people who do not pick up their dog’s mess, after 500 complaints about dog fouling were made to the Council between April 2016 and April 2017. However, Mrs Warner suggests this penalty has not been effective.

“It hasn’t made a difference. Who polices it? she said. “But we want to make people more aware that they do need to pick up. It’s not hard.

“Hopefully the t-shirts help with that and we want to get little signs made that we can stake in the ground to say we’ve picked up. That way, people might be more conscientious and change their attitude.”

She is referring to the group’s personalised t-shirts with ‘We Give A 💩’ proudly blazoned across the front. They were made by Emma Robins, who runs Two Tails Dog Walking in Cardiff, and can be bought for £12. £2 of every sale goes to Cardiff Dogs Home.