A recent study by The Guardian suggests that 50% of students commute to university. But what’s the situation in Cardiff?

Over 60% of students who commute to Cardiff’s universities feel ignored and neglected, says a recent Inter Cardiff study.

In a survey of over 30 commuter students at Cardiff University, Cardiff Metropolitan University and the University of South Wales, nearly 60% of participants said that they did not have a ‘typical’ university experience due to commuting.

The main reasons for low levels of satisfaction included a lack of contact hours at university, facing difficulties with unreliable public transport, and not being able to attend evening social events at university.

In most cases, students claimed that they felt left out of social events and activities, and found it increasingly difficult to integrate with others who lived in student accomodation.

One student, who wished to remain anonymous, said: “I’m in my first year at university, but I am only in lectures for about five hours a week.

“I find it hard to make functional friendships because of this [lack of contact hours]. I have considered dropping out in the past because I felt like I was totally wasting my time at university and I felt like nobody else was in the same situation as me.”

Inter Cardiff found that 24% of commuter students travelled between 1-2 hours to attend university in Cardiff, most commonly by either train or car.

With course fees having trebled in the past five years for UK students, nearly 70% of students surveyed commuted to university to save money, whilst others commuted due being responsible for a member of their family. 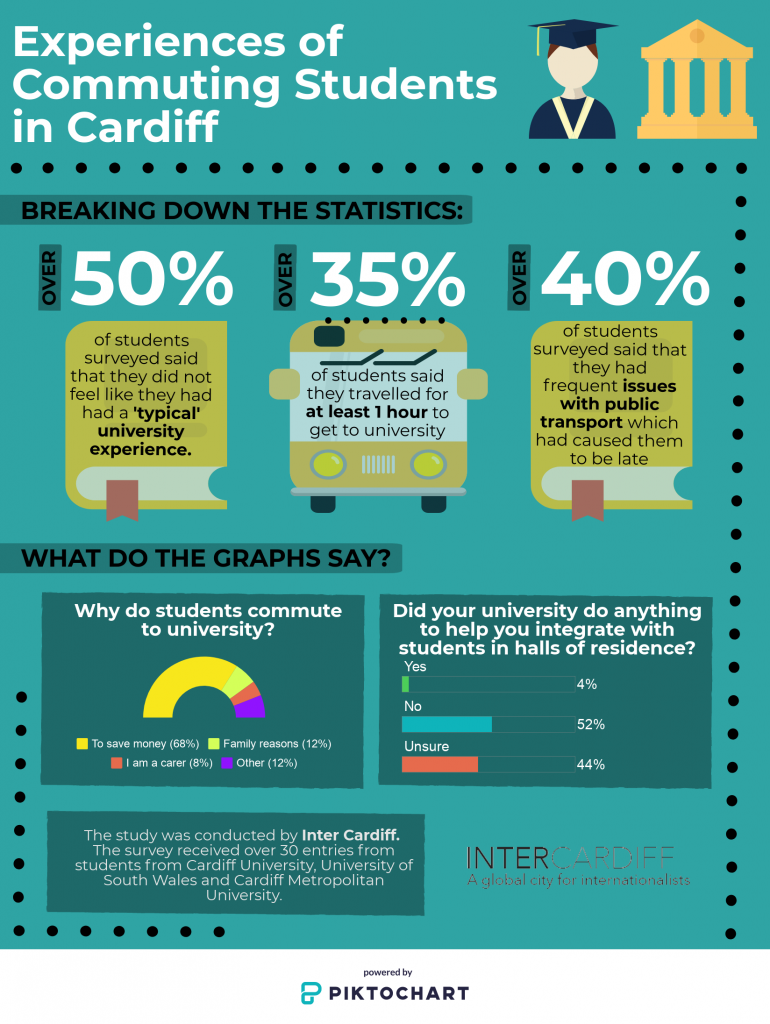 The Guardian published a survey at the end of January 2018, which highlighted that, on occasions, students who commuted to university, were ‘locked out of lectures or reprimanded by staff for being late when public transport let them down.’

Whilst most students, who were surveyed by Inter Cardiff, said that their university lecturers understood when they turned up late due to disruptions in public transport, there were some exceptions.

“This would mean that I had very little sleep and time to prepare for my lectures. My train in the morning to university would take me 45mins. I would often skip the 11am lecture in order to eat or go to the toilet. I always felt too embarrassed to attend my lecture 15 mins late. Because I would walk in late or not attend, I received a disciplinary from my lecturer for poor attitude.”

Another student, who also wishes to remain anonymous, said: “I was once humiliated in front of my whole class. I was questioned why I was late. I didn’t want to say that it was because I had to go to the toilet when I arrived in university. I live over an hour away from campus.”

Student Editor, Seeta Bhardwa from Times Higher Education, said that: “It is important for universities to cater to the specific needs of commuter students, as it appears that more and more students are choosing to live at home for many different reasons.

“This could be through organising social events specifically for commuters that end earlier so they have time to get home or assigning them to a halls of residence so that they are kept in the loop about activities within the student’s union.

Despite Seeta’s comments about how universities can help commuter students, approximately 52% of respondents said that their university and their Students’ Union provided no form of help to integrate the two student communities.

44% of respondents said that they were ‘unsure’ about whether their universities accommodate to the social needs of students.

If you are a commuter student, or have any thoughts about this survey, let us know your views on twitter @intercardiff