Why do we still need International Women’s Day?

One hundred years on from gaining the right to vote, are women still being failed by social policy and society?

International Women’s day happens once a year on 8th March. This year’s  is particularly significant, as it is 100 years since the first women won the right to vote in the UK. 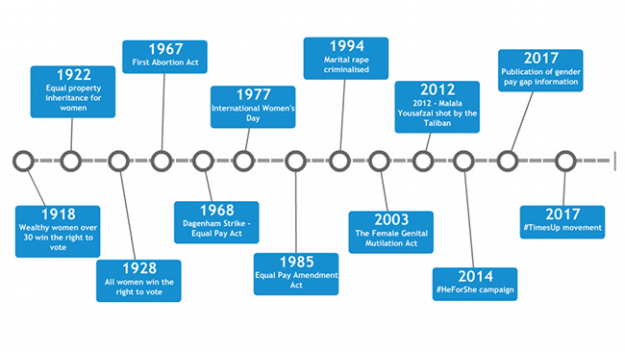 A timeline of key events over the last century, see more at 100 Years of Women.

Individuals from all walks of life attended an International Women’s Day demonstration in the centre of Cardiff last Thursday.

Crowds gathered at 4:30pm under the statue of Aneurin Bevan, pioneer for social change and founder of the NHS.

But 100 years on from the Suffragettes’ success, why do we still need an International Women’s Day?

“The cuts in welfare benefits exponentially impact women far more than they do men,” said Barbara Street, Women’s Officer for the Labour Party for Cardiff North and one of the speakers at the event. “The austerity policies of this government have undermined services for women to the extent that they’re almost on their knees.”

Recent research conducted by the House of Commons library found that 86% of the burden of austerity has been carried by women. Cuts to welfare will have cost women a total of £79 billion between 2010 and 2020.

For others, International Women’s Day raises awareness of injustices in the British state pension system and a lack of social care provision.

It’s still the class war and it’s still a war against the male dominated world https://t.co/v8qtXe4mTy

This was particularly important for Olwen Leavold who said, “I’m very angry that my sisters haven’t been given their pensions. I think its disgusting that they expect women to carry on working after retirement; looking after children and old people because there isn’t decent social care.”

Whilst some women are forced into working well into retirement, others live in constant fear of gender based violence.

Statistics presented by Gwendolyn Sterk from Welsh Womens’ Aid also support the case that women have a long way to go to reach equality.

“One in three women across Europe will experience sexual assault in their life, still. Violence against women is a cause and consequence of gender inequality,” said Gwendolyn. “Whilst it is disastrous, it means it is preventable and we can do something about it in creating gender equality within our society in Wales.”

Gender equality and feminist causes have been steadily increasing across the globe. The #TimesUp campaign launched last year as a coalition of Hollywood leaders taking a stand for women’s rights.

Gwendolyn drew particularly on this now global movement during her speech. “We call ‘Times UP’ for perpetrators’ behaviour that goes unacknowledged, unchallenged and unpublished,” she said. “An era where survivors of violence are victim blamed- asked what they were wearing, what they were drinking rather than asking- why the hell did he do that?”

Although the majority of attendees at the Cardiff talks were women or those identifying as female, there were some men at the demonstration.

“I identify as a Feminist but I don’t think all my friends would,” said Simon, a male supporter. “I think it’s the way people are brought up – the culture is centred on guys getting ahead. Even if it’s not an active decision by some men, it’s sort of an active thing in society.”

Simon is not alone. Male celebrities have now pledged solidarity by creating their own movement, #AskMoreofHim in the wake of the Oxfam scandal and Harvey Weinstein.

“The recent sexual harassment revelations in the media have made me think about the issue more,” said Simon. “It’s shocking how much of an issue it is if it’s something you don’t see yourself. But all these women are coming forward, it’s shocking.”

Although media coverage is increasing, this perhaps demonstrates just how many women have been silenced for so long.

“I talk to my mother and she says ‘we have been talking about this for 50 years, why are you still doing this?’” said Claudia Boes, co-founder of Cardiff Sisters of Solidarity, who organised the demonstration.

So how can we move forward towards a time when we achieve true gender equality in society and International’s Women’s Day becomes a thing of the past?

“We’ve tried it politely now for decades,” said Claudia. “I think now it’s time…to take it out onto the streets.”

Use the interactive map to see what happened around the world on International Women’s Day this year.