Adam Johannes, the founder and coordinator of the Cardiff People’s Assembly against Austerity talks about the movement, austerity and his attitude on politics.

Adam Johannes strikes you as an intellectual. His signature round glasses, greying hair and the calm, collected way he talks are a testament to the fact. Before actually asking him, I convinced myself that he was an academic. I struggled to hide my surprise when he told me that he describes himself as an office worker, musician and freelance writer. His twitter bio writes “MC, Style Councilor, Community Worker, Broadcaster, Hip Hop Ambassador, Popular Educator, Word-smith, Medicine Man, Intellectual Freedom Fighter, Fashion Model.”

Adam is a founding member and coordinator of the Cardiff People’s Assembly, the Welsh capital’s branch of the UK-wide People’s Assembly Against Austerity. The movement identifies as “a broad, united national campaign against austerity, cuts and privatization, linked to no political party.”

The People’s Assembly Against Austerity, UK was launched with an open letter published in The Guardian in February 2013 and was backed by public figures such as Tony Benn and Jeremy Corbyn.

The People’s Assembly began with a founding conference of 5,000 people in London. “We share a broad set of principles, and a brand. Obviously, it’s quite useful when you’re a part of a national campaign,” Adam says.

The 2008 financial crisis led many Western governments to implement fiscal austerity policies. Adam argues that during the first year of the crisis both Labour and the Conservatives shared the opinion that the way out of recession was by cutting public spending and austerity policies.  “The People’s Assembly Against Austerity of UK was launched very much for this argument, that austerity is a political choice not a practical necessity.”

In 2015, due to council budget cuts, seven Cardiff libraries were threatened with closure. The Cardiff branch of the People’s Assembly was created to resist these closures. That February, the Assembly organized a mass-read in at libraries across the city.

“We said to people, bring a book and let’s stage a mass read-in outside the central library. Hundreds of people gathered. People were holding up books so it caught people’s imagination and became quite visual in the press photos.

Just three days after the demonstration, local councils cancelled the budget cuts. “That campaign galvanized us to set up a wider campaign against austerity,” he says. 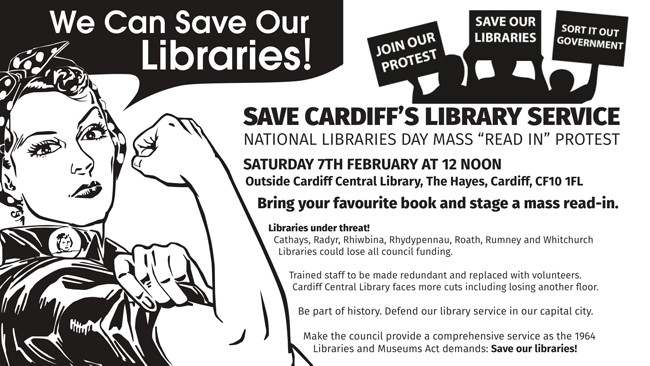 The Cardiff People’s Assembly organises campaigns, protests, film screenings, lectures and reading groups on a weekly basis. “We try to have a lot of events to raise awareness, what we call political education. Get people thinking about neoliberalism and austerity.”

“Even in organizations dedicated to social change there are many egos and personalities involved. You get careerism, people see being involved in something which is popular as a means of advancing themselves.. People have a mixture of good motives and bad motives. But I think that is true for every area of anything in life. It’s part of being human.”

The movement attracts local students, artists, academics, social workers and in general, people whose politics are to the left. “We have people who are members of Labour, Plaid Cymru, the Green Party and some of the far-left, as well as younger people who don’t necessarily identify themselves with those terms. If you just base yourself in one political party you will exclude all those other voices so it’s very important for us to bring in these voices, everyone who is against austerity into one movement. It’s quite important for us to be independent of any political party. We have to challenge even parties we’re sympathetic to. We have to push them and change them.”

One could argue that one-issue movements may have noble motives but they can never harness the political power that major parties do and will never be as effective as them.

Adam believes that grassroots movements exist to pressure big parties and to keep them in check. “A political party has all sorts of pressure from within and from above from powerful interests. We elect the government but we don’t elect the banks, we don’t elect the corporations and so you need a grassroots pressure from below. We have to be with our leaders as long as they represent us but able to act independently the minute they don’t.”

Nevertheless, he admits that he knows that it is impossible for the movement to achieve all its goals, because there is no perfect society or perfect political system. Politics are done by people, he says, and people are not perfect.

“The best thing about the world is people and the worst thing about the world is people. When you talk about human nature you think of crime, murder, wars and you see that human beings are capable of very dark things. But then you see someone like Nelson Mandela, who for a political cause, was prepared to spend a big part of his life in prison. Then you see people who give up a lot of their lives to care for relatives or raising children. People do things which require a deep personal sacrifice and don’t necessarily bring them any benefit. They have the capacity to be both selfish and selfless.”

When I met him again at a People’s Assembly event which hosted the group Social Workers against Austerity, I realized that I still wasn’t clear about what to write as Adam’s occupation. So, I asked him again.

“I don’t know. I’m in between jobs at the moment. I used to work at an office before. Write that, office-worker.”

Despite his unselfish services to the community of Cardiff, Adam admits that he still has a sense of unfulfilled destiny.

“I have a problem with self-discipline. When I look at successful musicians or artists, they are very driven, whereas I am quite lazy. I always said I would do some writing but suddenly there was something more interesting to do.

“However, I think that I’ve sacrificed a lot of time for community causes which have achieved things and this feels kind of satisfying. That maybe in your very small way when you leave the world you might have left in a slightly better way that it might have been if you weren’t there.”