Wales currently has the most restrictive stance possible toward growing Genetically Modified (GM) crops. As the UK is soon to be free of the shackles of EU agricultural policy, it may be time to reconsider Wales’ position on GM crops.

What are GM crops?
For thousands of years people have been breeding crop plants to improve the desirable characteristics of the crops we eat. The tallest, strongest, or tastiest plants are selected and bred together in the hope that their offspring will share these traits. This is called selective breeding and is still the most common technique for developing new crop varieties.

The power of this technique is well demonstrated by the the Brassica family of plants (cabbage, broccoli, cauliflower, Brussels sprouts, collards and Kale). This diverse family of plants were all produced through selectively breeding the wild mustard plant for different characteristics.

When plants (or humans for that matter) reproduce, the genomes of the parent plants are mixed up, swapped around and combined in their offspring. It is now possible to directly manipulate the DNA of plants to produce the characteristics we want, this is called genetic engineering, and it is the process that produces genetically modified (GM) crops.

This is undoubtedly technologically impressive, but what does it mean for our future? What problems can GM crops help the human race to overcome? 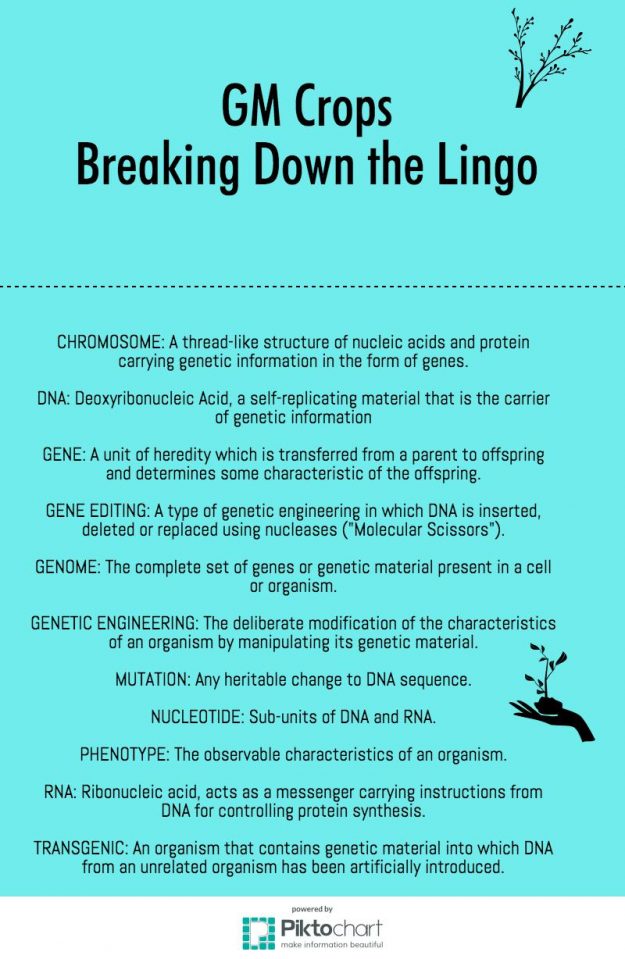 Case for more GM in Wales?

The global human population is predicted to reach 9 billion people by 2050. The effects of climate change will leave vast swathes of the world uninhabitable, and environmental catastrophes will lead to mass migration. Even if only one of these apocalyptic predictions come true, producing enough food for the planet is not going to be easy.

According to Professor Melanie Welham, chief executive of the Biotechnology and Biological Sciences Research council (BBSRC) “It has been estimated that we will need to produce about 50% more food by 2050, that is a huge challenge in itself, but we also don’t have an infinite amount of land that we can use for food production, and we have limited natural resources.”Food security may seem like a distant issue in Wales, but when overpopulation and climate change are combined, these issues may soon end up on our doorstep. “We have to produce more food for more people, all while using less water, less energy, and less natural resources.”

“Agriculture is currently responsible for about 30% of greenhouse gas emissions, if we want to produce more food we can’t do it in the way we have been, it is not sustainable.” We have to look at using the land that we have more efficiently. Harvests can fail due to, pests, disease, adverse weather or political unrest. Some may think this is unlikely to affect the UK, Professor Welham disagrees, “We are all used to the supermarket shelves being full but 20% of our food comes from outside the EU, areas that do suffer unpredictable harvests, and bad harvests can affect the availability of food.”

Huw Jones, Professor of translational genomics for plant breeding at Aberystwyth University and Vice-Chair of the Genetically Modified Organisms Panel at the European Food Safety Authority believes that GM crops will have a vital part to play in ensuring food security. “GM can be used to improve the nutritional value of crops. Golden Rice for example has been engineered to produce greater amounts of Vitamin A, lots of people in South Asia go blind due to Vitamin A deficiency, and it is unacceptable that this is allowed to continue.”

EU regulation of GM crops is based on the precautionary principle,  if an action such as the release of a GM crop has potential to cause harm to either the public or the environment, then the burden of proof is on the manufacturer to prove that it is safe. Professor Jones points out that people often forget that “this includes the risk of inaction as well as the risk of action. The risks of inaction (blindness) on Vitamin A deficiency is a very powerful argument for Golden Rice in particular, and GM in general.”

The potential applications for GM technologies are broad “There is pest resistant Eggplant being grown in Bangladesh and drought resistance Maize in Tanzania”. Despite this potential, public opinion is generally very negative toward GM and this seems to be reflected in the Welsh government’s position.

Case against more GM in Wales?

There is a diverse community of activist groups that oppose the production of GM crops in the UK. Liz O’Neill, the Director of GM freeze thinks that the answer to feeding the world lies in improving how food is distributed, and the sustainability of farming practices. “Indigenous people, who produce a large percentage of the world’s food, farm in a much more natural, holistic way. The crops themselves tell you which genes are needed at the time because they are the ones that grow. GM agribusiness, precision farming and corporate dominance of the farming industry haven’t served us very well.”

Corporate interest, greed and vanity lead to researchers downplaying the potential risks of GM according to O’Neill. “it is way less straightforward than everyone would like to portray it as, and so there is a danger in trying to reduce regulation. There are a lot of things that can go wrong, there is a complete sweeping under the carpet of transgenic-induced mutations for example.”

“There is a real lack of humility in the face of nature there, the idea that we know how it all works now, when in reality we have barely scratched the surface of the wonder that is DNA. The arrogance in thinking there wont be any unintended effects or even admitting the dangers is very worrying, precision is not the same as predictability.”

Researchers may well be guilty of underestimating the potential dangers of GM crops. It could also be argued that the Welsh government is guilty of the opposite, a blanket ban on GM crops may be overstating the potential harms. As we sculpt the post-EU landscape, it may be time to redress the balance and look again at what role GM crops can play in ensuring our futures.