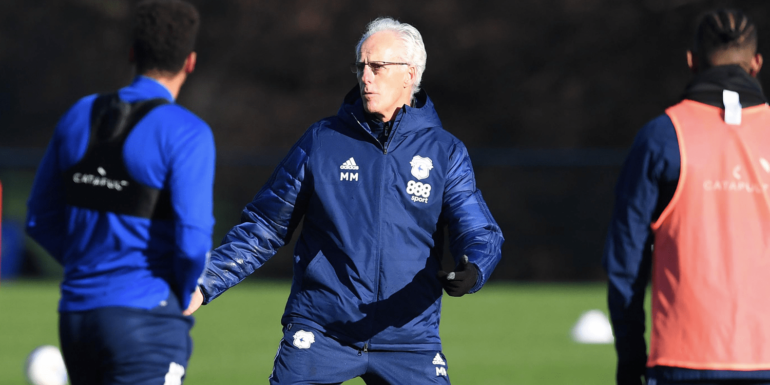 THERE is little time to waste for Mick McCarthy as he begins his tenure as Cardiff City manager.

The 61-year-old replaced Neil Harris at the Bluebirds helm last week and takes charge of his first game against Barnsley tomorrow night.

McCarthy has only signed a deal until the end of the season, but he is far from a caretaker boss as the club’s board still believe a success can be made of the campaign despite the team languishing in mid-table.

Here are five things that should be at the forefront of McCarthy’s remit in the Welsh capital.

Six consecutive defeats is enough to daze any dressing room, and Cardiff captain Sean Morrison admitted on Tuesday that “a lot of the squad are playing low on confidence”.

One of McCarthy’s first jobs will be to lift the group back up, and by the sounds of it, that process has already started. Morrison described the players as “buzzing about like Duracell bunnies” in recent days as they attempt to impress the new boss.

Winning games will naturally breed more confidence, so it is important that the Bluebirds return to form as soon as possible, starting with the trip to Barnsley on Wednesday.

Finish in the top six

A fifth place finish last season and reasonable squad investment in the summer meant that finishing in the play-offs this year was always going to be the aim and Neil Harris’s inability to push for the top six was arguably one of the main reasons for his departure.

Cardiff’s parachute payments run out at the end of the current campaign, meaning the club’s board are desperate to get back into the top flight from a financial perspective before they become just another run of the mill Championship club.

The Bluebirds are currently 13 points behind the top six, so it is certainly going to be a big ask, but McCarthy is as experienced as they come in the second tier and has won promotion to the Premier League on two previous occasions with Sunderland and Wolverhampton Wanderers.

It is a talented squad too, and a run of wins in the Championship can lift any mid-table team into the play-off picture.

There is certainly a disconnect between Cardiff and their supporters right now for many reasons – quite literally because games are behind closed doors, but also in a more psychological sense. As Neil Harris’s tenure came to an end, the football was not entertaining and the results were abysmal.

This is a proud football city and fans want something to cheer about again. McCarthy himself is a captivating character so will certainly be engaging to follow in much the same way that Neil Warnock was.

Once again though, winning games and moving up the table will get supporters onside. There is a current sense of optimism that surrounds any new appointment and the veteran boss will want to keep that feeling for as long as possible.

One thing that would certainly endear McCarthy to Bluebirds supporters would be winning the South Wales derby against Swansea City. Cardiff have not beaten their rivals in their last four attempts, last claiming victory in November 2013.

They meet at the Liberty Stadium on March 20. Swansea won 2-0 in the meeting in the capital in December, and neither team has ever done the double over the other in the same season.

Steve Cooper’s side are in a much better state at the moment as they sit second in the Championship table, but a Cardiff victory would be uplifting for supporters, especially if it dented Swansea’s promotion hopes.

One major gripe of supporters of late is the lack of academy presence in Cardiff’s first team. Not since the likes of Aaron Ramsey, Chris Gunter and Joe Ledley over a decade ago has any youth product asserted themselves at senior level.

Neil Harris appeared to be trying to change this by giving minutes to Joel Bagan and Mark Harris this season, while former Bluebirds defender David Hughes was appointed as the new head of academy coaching in November.

Cardiff have one of the oldest squads in the Championship, so an injection of youthful energy would not go amiss and local talents featuring in the team are bound to get supporters onside. The big question is whether McCarthy will place his trust in the academy when so much is on the line.