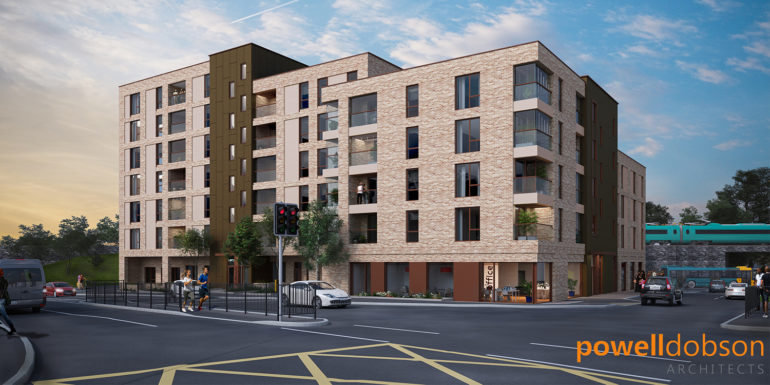 RESIDENTS of Llandaff and Fairwater have until February 26 to make their views heard on a new development at the former recycling centre on Waungron Road.

The proposed plans include a new bus station, space for shops and 50 council flats across four, five and seven storey buildings.

The bus station – dubbed the ‘Western Transport Interchange’ – is planned next to the A48 Western Avenue and Waungron Park train station.

Planning permission to change the recycling centre into a transport hub was granted in November 2016, but initial plans were scrapped and the site has remained unused since 2014.

In the planning documents, architects Powell Dobson say the new transport hub will “provide benefits to the existing residents and future residents of the development and provide more convenient access to key facilities within Cardiff”.

The planned landscaping around the site aims to provide “a natural and lush aesthetic” and the design emphasises sustainability: the buildings will be car-free and storage for bikes will be provided.

However, many nearby residents have voiced their concerns about the proposals. A petition launched by Llandaff councillor Sean Driscoll has gathered almost 667 signatures at the time of writing.

“As councillors, we are pleased the site is being redeveloped,” said Coun Driscoll, “it’s a brownfield site ideal for housing.

“Residents would like to see the recycling centre kept open. However, the council has always earmarked the land for a bus interchange.

“To support the residents we have started an online petition, calling on the council to give residents a range of options to choose from.

“We will do out utmost to support residents to get this scheme put to one side. It’s too big and is not welcome”.

Nearby residents have received leaflets detailing the plans as part of the consultation period before the planning application is submitted.

“Flats on that corner would be a logistical nightmare unless major road alterations are done,” said Judy Hitchen, 45, of Llandaff.

“The traffic coming from Fairwater underneath the railway bridge is too heavy as it is”, she added, commenting that the new development and its lack of parking “will also impact on the surrounding congested streets”.

Other residents have raised concerns that the height of the buildings will look out of place in the area, voicing their support for the reopening of the recycling centre or the creation of a park-and-ride area with wheelchair access.

“There’s a feeling amongst residents that this development is far too big and will impact them, their homes and lead to pressure on parking and the road network,” said Coun Driscoll.

“We’re not opposed to housing, it’s the mix of a bus hub, housing and a shop that could well impact ‘The Cabin’ newsagent business”.

Residents have until Friday, February 26 to respond to the pre-application consultation by emailing consultations@gjplanning.co.uk. The plans can be accessed here.

Once the consultation period has ended, the developers will apply for planning permission on behalf of Cardiff Council and the public will have another opportunity to comment on the plans.