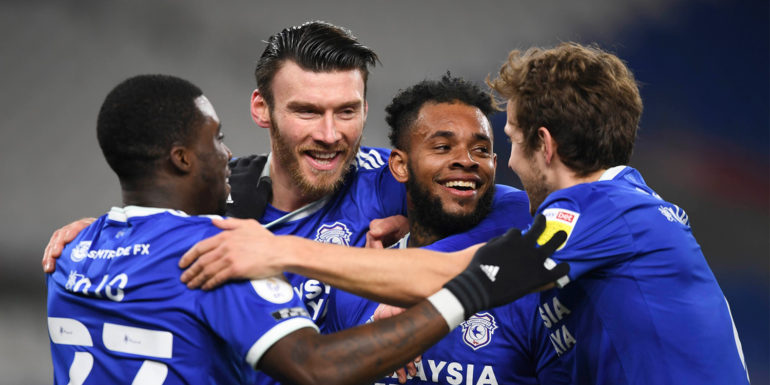 Bluebirds are in better form than their fierce rivals, but risk being on the wrong side of history

THEY say that the form book goes out of the window on derby day, but Cardiff City will be hoping that old cliché does not ring true this weekend.

That is because the Bluebirds have lost only one of their 13 Championship matches since Mick McCarthy took over from Neil Harris in January, which has put them in contention for a place in this year’s play-offs.

In contrast, Steve Cooper’s Swansea side, who are third in the table with a game in hand, have lost on three occasions in the same period of time, including a 3-0 defeat against Bournemouth on Tuesday night.

Cardiff, who sit in ninth, are preparing for the derby having been frustrated by Stoke City, which brought a strong reaction from the manager.

“It’s the first time I have had a raised voice”, said McCarthy.

“I wasn’t happy first half. I thought the performance was way below what we have set our standards at and we needed to up it.”

Cardiff supporters will still hold some optimism ahead of the derby based on both sides’ recent form, but they will be acutely aware of the significance of losing tomorrow.

Neither side has ever done the double over the other, which means that Swansea could make history tomorrow with a win at the Liberty Stadium.

Swansea ran out 2-0 winners at Cardiff City Stadium in December thanks to a brace from Jamal Lowe. Cardiff struggled to find a foothold in the game, which was not helped by midfielder Joe Ralls receiving his marching orders in the second half for a second bookable offence.

The prospect of a first-ever South Wales derby double is not one that Swansea are taking lightly.

In his pre-match press conference, Cooper said:  “There’s a first for everything and if Saturday is that time, then brilliant, we have to go for it.

“I would much rather be going into it knowing you can do the double rather than the other team do it, that’s for sure.

With so much at stake, can Cardiff maintain their strong run of form and prevent an unwelcome chapter being written into Wales’s football history books, or will Swansea finally ‘do the double’?

Facing Cardiff will be a very different prospect now for Swansea compared to their last outing, as shown by Championship results and statistics for both clubs since McCarthy’s appointment on January 22.

Harris was sacked by the Cardiff hierarchy in January after six consecutive defeats, which left the club 15th in the Championship, 13 points adrift of the play-off places and only nine above the relegation zone.

The McCarthy era is still young, but the improvement seems clear-cut as Cardiff have won as many games as the Swans in that time and have dropped fewer points, although they have played one more Championship game in that time because Swansea reached the fifth round of the FA Cup.

Cardiff have only been beaten by high-flying Watford under McCarthy, and even went on a five-match winning streak, which included a 2-0 win against Bristol City at Ashton Gate in the Severnside derby and impressive victories against Preston (4-0) and Bournemouth (1-2).

In recent weeks, Cardiff’s surge has slowed. They have won just one of their last five games (a 4-0 home win against Wayne Rooney’s Derby County), drawn three times and lost once.

This has coincided with striker Kieffer Moore, who has scored 16 goals this season but missed several chances against Stoke, starting to look jaded.

Despite this, McCarthy’s team have outscored their fiercest rivals by eight and conceded seven fewer goals, suggesting the derby has come at a good time.

A 4-1 loss against Huddersfield Town on February 20 marked the start of a turbulent month for the Swans, who also conceded three goals in defeats to Bristol City and Bournemouth.

The four games they have won since then have only been by a one-goal margin. Without their star man André Ayew, and perhaps a bit of luck with refereeing decisions, Swansea’s situation could be much worse.

Two last-gasp winners from the Ghanaian against Middlesbrough and Stoke earlier this month, both of which came from the penalty spot, have been enough to keep the pressure on Watford and Brentford, but the Swans will need to improve from recent weeks to stay in the hunt for automatic promotion.

Since the end of January, Cardiff’s form has been better than Swansea’s, and the Bluebirds will take comfort from the reduced home advantage brought by the pandemic, which means the players will not have to put up with a hostile greeting from the Jack Army.

McCarthy will be looking to kick-start another unbeaten run to continue his side’s unlikely play-off charge but will be cautious of the dreaded double, so it would not be a surprise to see him set up for a draw.

Swansea, meanwhile, are looking to bounce back from Tuesday night and have one eye on making history against their old foe – but will be cautious of another slip-up.