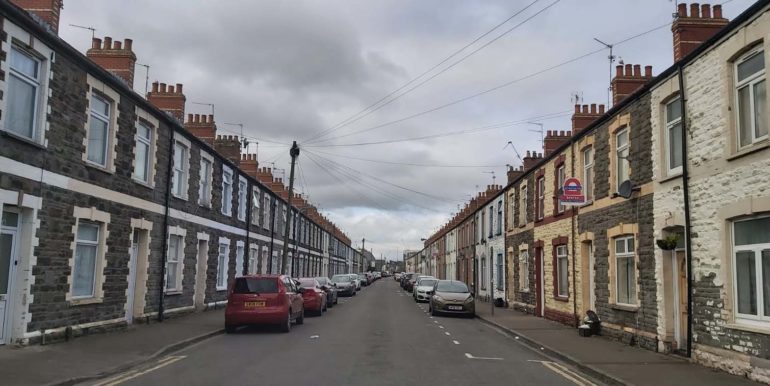 TWO ex-Splott residents are writing a TV show based on their experience living in a haunted house on Topaz Street.

Katie Petersen, 37, from St Mellons and Katie Scott, 39, from Salford, are co-writers of the show that will be based in Splott and Adamsdown area in the 2000s and has a working title of God’s Plot.

The pair are currently waiting for Covid-19 restrictions to lift so that they can meet up to finish the semi-autobiographical series, which they plan to pitch to organisations including the BBC and Shiny Button Productions, the comedy specialists who made Murder in Successville.

“We’ve written the pilot episode and we’ve written about three or four episodes. We actually started writing it about five years ago. If we get together properly, we could completely polish it off within a weekend,” said Ms Petersen.

Although not completely autobiographical, she said that the paranormal activity in the screenplay is based on her experiences living in Topaz Street.

Ms Petersen said: “Lots of really weird things happened, and we actually got so used to it in the end that we just stayed there. But it was quite scary.

“What made us decide to finally move out was my friend was in bed upstairs in her room and a full bottle of Jack Daniels literally flew off her chest of drawers by her bedroom door.

“In the middle of the night it literally just smashed into her bed and she said: ‘We need to move out, I can’t take this anymore’.”

The comedy element of the show will be based on their experiences of being haunted on “probably a twice-daily basis”, which made them both used to it.

Daily supernatural activity included hearing singing when the house was empty and guests experiencing sleep paralysis – where they woke up but couldn’t move – while seeing an “evil face”.

Ms Petersen explained how she first experienced paranormal activity when she was staying over at the house before she had moved in. She saw a girl at the top of the stairs.

“I didn’t know any of Katie’s other housemates and as far as I was concerned, she was just one of her housemates. It looked as if she was completely solid like me or you, but in the dark kind of lit up.

“I was about to say: ‘God, that’s a bit rude just sneaking up on me.’ She looked modern and was just smoking a cigarette with her head tilted to the side. It was only when I came to my senses, I thought that’s not real! What the hell is that?

“I burst through Katie’s bedroom door and she said: ‘are you alright?’ And I said: ‘no, something really weird has just happened.’ Her words to me were: ‘Did you see a girl, sat up high, smoking with her head on the side?’ And I said that that was exactly what I saw and she said: ‘yeah, I see her all the time’.”

The pair had hoped to find out more about the history of the house to see if it would explain the supernatural activity and wanted to speak to the current inhabitants.

“I’ve only been able to speak to someone who was born in that house and moved out in about 1979,” said Ms Petersen.

“She said it was a lovely family home with no paranormal stuff at all, but that would make sense because we felt like it was quite a modern thing. The girl I saw wasn’t a stereotypical lady in a long white crinoline dress, she looked to be from the 80s or 90s.

“I’d love to go and knock on the door, but I think that would freak people out. I was even thinking of writing a letter, but I just don’t want to scare people. I don’t think it would be fair.”

Despite the supernatural activity she thinks the show’s subject matter will be relatable for a lot of people.

“It’s kind of a comedy-drama. There are some really hard hitting things in there, quite tragic things, but with a bit of a comedic edge as well. The haunting is just a bit of a side story,” she said.

“We can write from experience because we’ve gone through certain things, and I think that, mixed with humour, it makes it more accessible and it’s not as gloomy as it could be.”

Ms Petersen has a degree in Creative and Professional Writing and said the events from that time had stuck in her and Ms Scott’s memories, making them want to write about it.

“It’s been our dream for ages just to write, and seeing some stuff on TV that’s gone really far and thinking, we could do that,” Ms Petersen added.

“But we were still just so obsessed with the place – we still are. Every time we speak we’re still remembering things. I can remember living through it and thinking, this is like a TV show. It just needed to be written.