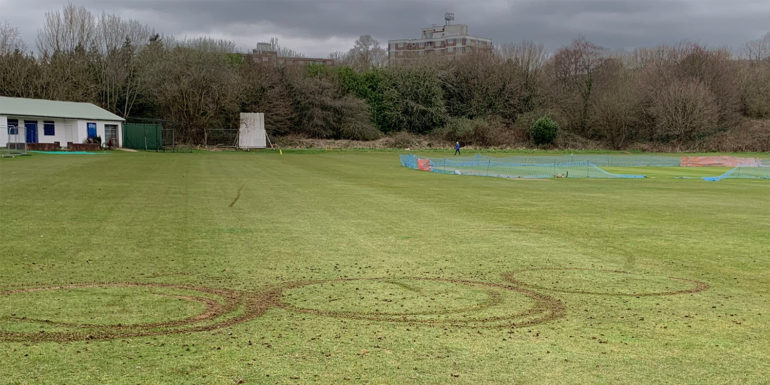 A VANDAL thought to be riding a motorbike or moped has delayed a return to training for cricketers at Whitchurch Heath.

The club believes that somebody rode a vehicle through the deserted Whitchurch Hospital site, which closed in 2016, and on to the cricket pitch.

Neighbours say the rider hit and broke a fence surrounding a grass square in the centre of the pitch, perhaps because the rider did not see it in the dark.

They believe this caused the rider to be thrown off the bike, causing further damage to the playing surface when he landed on the pitch and the vehicle veered off.

The damage means that the club’s return to training ahead of the new season will be delayed as the grass will need to be re-seeded and new fertiliser put down at a cost of several hundred pounds.

Because the South East Wales Cricket League will start later than usual due to Covid-19 restrictions, there should not be an impact on competitive matches.

The neighbours told the club the incident took place around midnight on Saturday, March 20.

A similar incident took place in November 2020. The club has reported both incidents to South Wales Police.

Whitchurch Heath club secretary, David Reynolds, said: “The damage is fairly bad. The fact that we’re not going to start playing until April 22 at earliest should give us enough time to get the pitch in order, but it’s definitely going to hamper our training, which we were hoping to start next week.

“This is not the first time this has happened with the motorbikes. It’s been an ongoing problem we’ve had throughout lockdown.”

The club has also faced problems with anti-social behaviour, including broken glass being left on the pitch. In March 2019, the club’s pavilion was broken into.

“If that isn’t spotted, we could have started a game in May and have someone diving into a field of glass. We are trying to get some more security over there.

“In a way, it’s part of a wider trend. You’ve got the cricket field and football and rugby pitches there, which are all open access and with very limited security from Whitchurch Hospital,” said Mr Reynolds.

“You’ve also got groups of kids smoking, drinking and littering.

“There’s a general free-for-all in an abandoned area where all of this stuff is happening, which is causing our groundsman no end of bother and hassle. Every other day, something is being vandalised.

“They’re trashing something that we like to think is quite important to the community.”

The club has over 100 members, including four senior sides. Over half of the club’s members are juniors.

It was recently named as a disability champion inclusion club by Cricket Wales, meaning its facilities can be used to host the Cricket Wales disability squad’s international fixtures.

The club has appealed to the police and Cardiff and Vale University Health Board, which owns the pitch next to Whitchurch Hospital, to improve security by installing cameras or fencing, or by patrolling the area.

Mr Reynolds said an access road to the new Velindre Cancer Centre, which will pass the perimeter of the cricket pitch, could reduce the risk of such incidents happening again.

The development of the new cancer centre was approved last Friday by the health minister, Vaughan Gething.

Mr Reynolds said: “Our hope is that, with the increased presence there over the coming months, that could help us eliminate the problem.

“Velindre are going to want their stuff to be safe and they’re not going to want any of this to be happening. The pitch from us would be, ‘Can you build us a fence while you’re building everything else up?’”