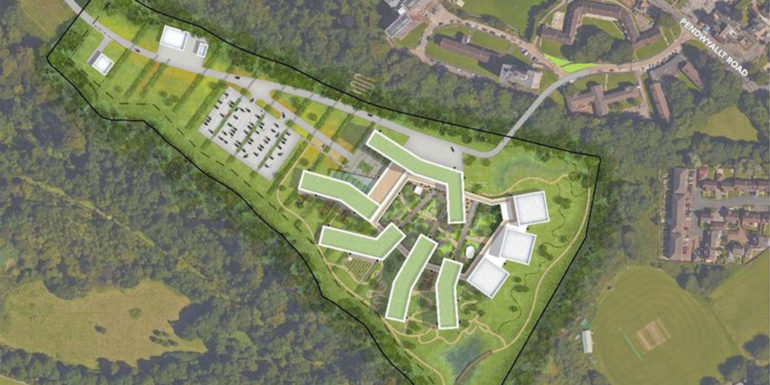 An impression of how the new Velindre Cancer Centre will look from above. Image: Velindre University NHS Trust
Tom Leaman·23 March 2021

Opponents of the development say they will fight the decision, while supporters look forward to construction starting

CAMPAIGNERS against a new cancer centre being built in Whitchurch have said they will carry on fighting despite a decision to approve the outline business case for the venture.

Planning permission for the new Velindre Cancer Centre in Whitchurch was granted by Cardiff Council in 2018 and Vaughan Gething MS announced on Friday that it is expected to open in 2025 after he approved the cancer centre’s outline business case.

The new cancer centre will be built on land known locally as the Northern Meadows to the north of the existing Velindre Cancer Centre, which opened in 1956. It will have the capacity for 8,500 patients and 160,000 appointments per year.

Last year, residents in Whitchurch formed a campaign group, Save the Northern Meadows, to oppose the plan based on environmental concerns and because of the impact of large-scale construction works on the local community.

The group, who wanted the new centre to be built next to the Heath Hospital, described Mr Gething’s decision as “shocking and saddening.”

A spokesperson for the campaign said: “Save The Northern Meadows assures south-east Wales that the campaign not only survives – it is truly galvanised.

But news of the health minister’s decision was welcomed by the campaign group that was set up last August to support the development going ahead in Whitchurch.

Wayne Griffiths is an admin of the Support Velindre Facebook group, which has over 21,000 members.

He is also an ambassador for Velindre and a trustee of the Rhian Griffiths Forget Me Not Fund, which was set up in memory of his daughter, who died in 2012 after a two-year battle with cervical cancer.

Mr Griffiths said: “South Wales will now receive a state-of-the-art cancer centre, something which the population very much deserves, as do the hard-working, inspirational staff working in ever-increasing cramped conditions at VCC.

“It is time now to move on to the start of construction to enable a finish to the building in 2025.”

But today a spokesperson for the STNM group said they’d fight on, not move on.

“We are angry at Vaughan Gething’s decision to give the go-ahead to the new Velindre Cancer Centre on the Northern Meadows for a number of reasons,” the spokesperson said.

“The concerns of 163 senior clinicians have been ignored and the community, Coryton Primary school, Ty Coryton Special School, and assisted living accommodation within the area have been sentenced to four years of heavy construction. This will cause immeasurable damage to the people living nearby.

“With numerous protected species living on and around the meadows, we despair at the impact this will have on biodiversity in Cardiff.

“This is not the right model of cancer care for the future and it is not the right location. It can only leave us with a Velindre Centre trailing behind the other cancer centres in Wales for decades to come.

“Now our campaign can have no doubt what it is we’re fighting for – the very soul of cancer care and the safety of nature itself in Wales for future decades.

“This tragedy is what we get when cancer care and the planet are pitted against each other, and the climate emergency and wellbeing of future generations become a dead letter. So, our battle continues. We’re not alone. We have climate-change experts and senior clinicians in cancer, these heroes of the pandemic, walking right at our side.”

On March 7, Save the Northern Meadows set up a JustGiving page to support their work and fund any legal action it may take to support its cause. It has raised over £8,200, which will be donated to Velindre if the money is not spent.

Their views have been echoed by three of the ward councillors for Whitchurch and Tongwynlais.

In a joint statement, Councillors Linda Morgan, Mike Phillips and Mia Rees said: “The Northern Meadows holds a special place in the heart of our community.

“Since the prospect of building on the Meadows was first talked about, we have been contacted by countless people who use the Meadows regularly and have spoken to us about how important this green space is to them. A feeling which has grown over a year when green space took on even greater importance.

“We are devastated in the Welsh Labour Government’s decision to reject the views of the community and medical professionals and press ahead with the new VCC build on the Northern Meadows.”

Mrs Morgan said that she understands the concerns of local residents and will listen to and work with her constituents “to get the best possible outcome for both the community in Whitchurch and for cancer patients”.

“This is an important moment for cancer services in south-east Wales and partnership working with our UHB, academic and third sector partners will be an essential step in our journey.

“Patients needs and safety are at the heart of everything we do as we progress our plans, building on our proud history and we are committed to working with everyone to deliver a building the benefits our patient population, as well as the local community and future generations.”