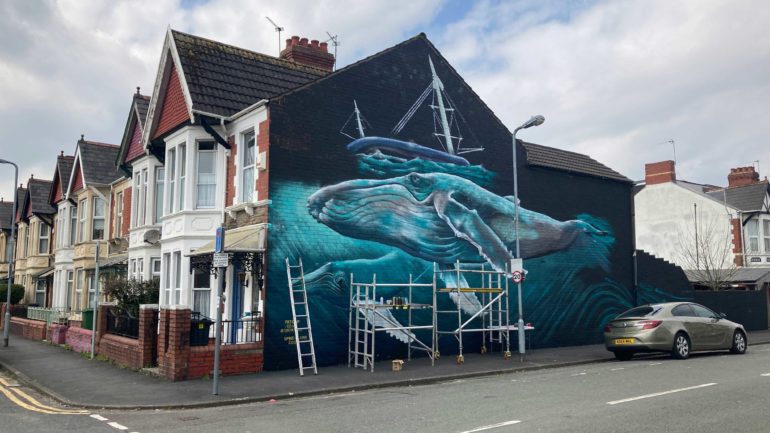 AN artwork highlighting global warming and rising sea levels has appeared on the side of a house in Grangetown.

The mural, on Dinas Street, shows a whale gliding through a flooded Cardiff.

This is the latest in a series of murals that Extinction Rebellion Cardiff is helping to fund across the city as part of No Ice Caps, No Cardiff, a campaign to raise public awareness of the climate emergency through street art.

Last year Cardiff was named the UK’s most at risk city due to climate change and the sixth most at risk in the world, according to a study funded by Nestpick, an online platform for on-demand housing.

‘As soon as I saw it I thought that’s powerful’

Carl Fenton, 48, is an architect living in Grangetown. He commissioned the artwork after XR Cardiff asked him if he would be willing to donate his end-terrace wall to their campaign.

“It started off with a letter drop by Extinction Rebellion,” he said.

“I’ve been a passionate street art follower for a while now and I’ve always thought the wall could be more useful living on the end of terrace.

“The letter pooled my interest in art and important issues which I’m very aware of, especially living in Grangetown so close to the river and the sea.”

Cardiff is built around three rivers which flow into the second-highest tidal estuary in the world, making the city particularly vulnerable to flooding.

Mr Fenton had seen XR’s two other murals in Roath. But instead decided to commission a professional artist to get the message out.

“I’d seen some of the work they’d done but it was a lot smaller, and the wall needed a big statement.

“I’d remembered my friend Spike and seen some of the stuff he’s done on Instagram and thought, well he’d be good.”

He covered a significant proportion of the costs himself, with subsidies from three further environmental groups – Cardiff Greenpeace, Green Squirrel and Friends of the Earth Cardiff.

Spike Clark, the street artist hired to paint the mural, said the piece was not supposed to be a pretty picture.

“I wanted something that was majestic and yet very much out of place. Taking something from the deep sea and putting it into the city.

“It’s something that’s not supposed to be there. Because essentially that’s the problem.”

Work on the mural began a week ago, with the finishing touches due to be made tomorrow. Plans for a further seven artworks will take the total number across the city to ten.

Mr Fenton, who is not himself an activist, said it was gratifying to receive so much thanks from local residents.

“I didn’t expect that. I was just hoping people would like it and not be offended.

“This week has been interesting. There were a couple of school boys just came past – they must have been about ten – and one was explaining to his friend that it’s all about climate change.

“The fact that he already knew all that information and he got it looking at the wall, I just thought well, that’s what it’s all about for me.”

An Extinction Rebellion Cardiff spokesperson said: “Our government is not taking the action it promised in the Paris Agreement of 2015 to reduce greenhouse gas emissions.”

“By increasing the visibility of these messages, we hope to make this matter politically unavoidable and ensure the homeowners around Cardiff are not left footing the costs.”

XR Cardiff coordinator Clare James said: “Throughout the year we aim to raise awareness so that, when we go to protest, we’ve got lots of people on board and this is one way of doing that.

“The thing about this mural is it’s such a beautiful image, but still has that very strong and important message about climate change.”

Its One Planet strategy, which sets out how to achieve this, includes more green energy, increasing tree cover to 25% and £61m to develop cycle routes and improve transport infrastructure.

Councillor Huw Thomas has said Cardiff council had implemented “a range of initiatives” to reduce its carbon footprint – such as installing solar-energy systems on council homes – but still needed to do more.

“Carrying on as we are is not a viable option,” he said. “We are going to have to think and act differently.

“The pandemic has changed how many of us are living our lives. We have begun to live more locally, using our local shops and nearby attractions.