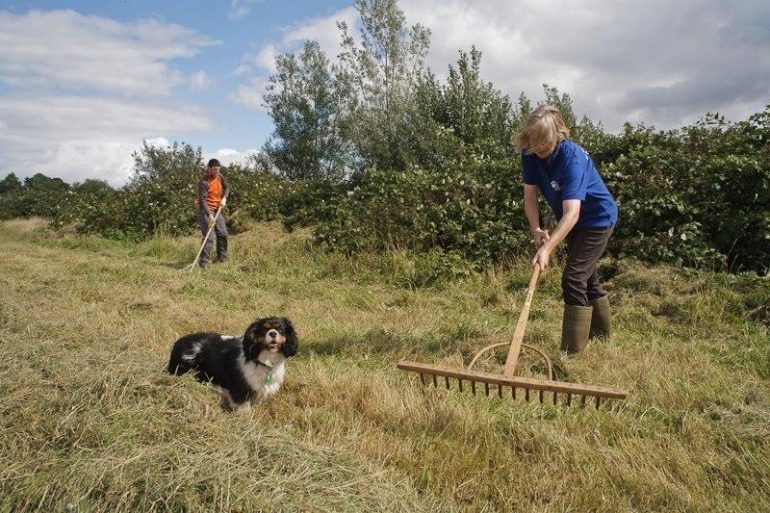 FRIENDS of Hailey Park has elected its new committee after Penny Bowers, who was one of the founders of the group in 2007, stepped down from the role.

Russell Todd, 45, of Mary Street, Llandaff North, has been promoted as the new Chair after the group’s AGM was held on Thursday, November 24.

Mr Todd has lived in Llandaff North since 2006 and been a committee member of the Friends group since 2009. He is currently self-employed, running several community initiatives.

He is the founder of two podcasts, Podcast Pêl-droed, which discusses Welsh football, and The Community Development Podcast. Within Llandaff North, Mr Todd leads the Philosophy In Pubs group at The Railway Pub.

He has also created Valleys Ale Trails, which promotes pub and brewery culture of the Welsh Valleys, and Grow Social Capital, addressing changing levels of social capital in society.

Mr Todd said: “There needs to be something behind individuals to keep everything above board.

“I figured I’d be happy to do that because my background is community work, working in the voluntary sector and helping community groups set up. This is me just doing it in my own community, I suppose.”

While Ms Bowers focused on her interests with biodiversity and conservation, Mr Todd expressed how he plans to focus on his expertise with community engagement and empowerment.

He said: “Community development goes much further than just engaging with communities. It’s all about achieving, in some cases, radical change and challenging forms of oppression.

“If you look at the pressure on green spaces in cities from housing developers, I would argue that is a form of oppression. Things like the demand for quick profit, like what’s happening with the pipeline underneath the park to service the huge Plasdwr housing development, do have an impact.

“The assault on the planet and the climate is a form of oppression. We’ve got to make the most of the green spaces. The days of the council doing everything on a park that it needs are long gone.”

He hopes to continue to support the community with access to green space, especially for residents who rely on it.

Mr Todd said: “We have members of the community for whom access to green space is something that isn’t readily available, people who can’t afford leisure centres or private health clubs.

“Our park is potentially invaluable to residents for their physical, mental, and emotional wellbeing, so what can we do to make the park available, accessible, and safe for them while they’re here?”

The need for a new Chair came after Ms Bowers announced she was stepping down from her role after over ten years of conservation and community work with the group. However, she will still remain a part of Friends of Hailey Park as a committee member.

Ms Bowers said: “Through the lockdown, I realised the things I was the happiest doing, which are to do with nature conservation and responsible dog ownership, so I’m continuing with those.”

“Stepping down means that I can do my role at a different pace,” Ms Bowers said. “It also means Russell will have more energy to do other things that I might not have been able to do because I was doing too much.”

“I was so pleased when he mentioned months ago that he might be interested. He’s got a different background than I have, as his is in voluntary service, and I know he works in the community sector anyways as a job,” Ms Bowers said.

Ms Clifton has lived in Llandaff North for three years and has loved having Hailey Park as her “front garden”.

She said: “When the river flooded a couple of years ago, I started picking up the debris left and ten bags later, began to extend the area back into the Park. I do a litter pick a couple of times a week, concentrating on the river bank and children’s play spaces.

“I looked up the Park’s website and started to join in the volunteer Sunday afternoons, helping Gareth the Park Ranger with a bit of the path clearance and common land conservation. It’s also a great way to make new friends as well.

“I have time, I enjoy the Park, and I appreciate all it has to offer and those who help make it happen. It was an easy decision to join the committee and make a small contribution to keeping the Park such a valuable open space for us all to share.”

Settling into his new role, Mr Todd expressed his gratitude for Ms Bowers and Derek Kinsey, who retired as Secretary and Treasurer after years of service to Friends of Hailey Park.

He said: “If I can be a quarter as industrious and committed as them, the group will be in safe hands because they have provided such a fantastic platform.

“At the same time, I’m not like Penny; I don’t have the same interests or motivations, and I like to think of this as an opportunity to put my own stamp on it, while also building on their incredible foundations.”