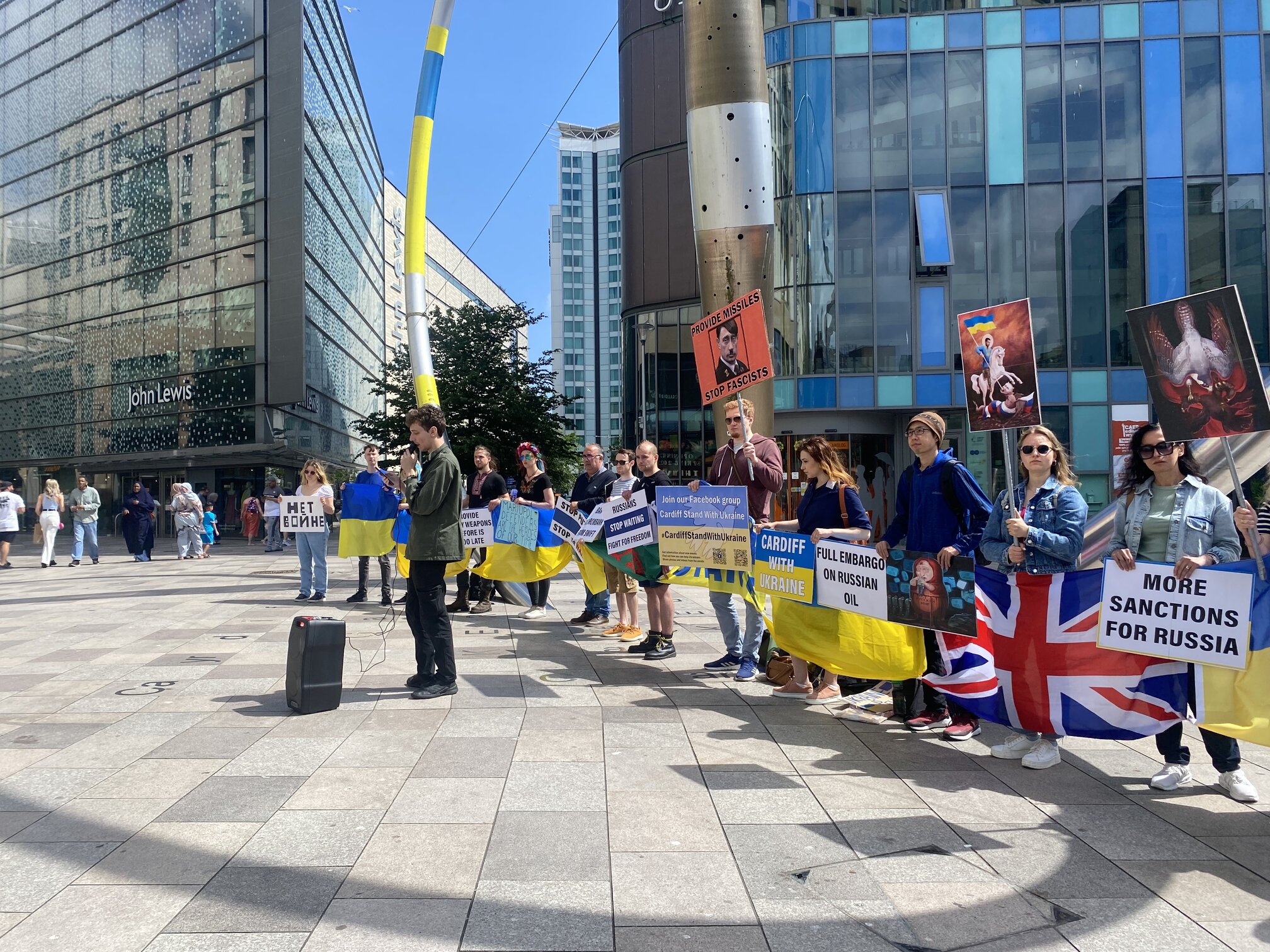 Members of Cardiff Stands with Ukraine at their weekly protest on Sunday June 12.
CERYS JONES·20 June 2022

More than 1,000 people in Cardiff have set up a support group to help the people of Ukraine

The group, Cardiff Stands with Ukraine, aims to raise funds and show support for suffering Ukrainians

The Beginning of the Group

AS Russia’s attack on Ukraine began, more than 1,000 people from Cardiff came together to set up a group to show solidarity with those affected by the war.

The public Facebook group was organised by seven administrators who inform its members of upcoming fundraising events, sponsorship opportunities and offers of help from the community.

Its motivation is to encourage the people of Cardiff to support the people of Ukraine against Russia’s merciless acts by fundraising, donating money or humanitarian aid and raising awareness of the war.

The group has raised around £7,000 for military and humanitarian support for Ukraine by coordinating fundraising events.

“The importance and intention of these events that help raise funds and gather support for displaced Ukrainians are fundamentally to affirm our humanity in the face of such inhumanity,” said Michael Sagatis, 44 from Neath.

The group has raised around £7,000 for military and humanitarian support for Ukraine by coordinating fundraising events.

“The importance and intention of these events that help raise funds and gather support for displaced Ukrainians are fundamentally to affirm our humanity in the face of such inhumanity,” said Michael Sagatis, 44 from Neath.

All funds collected from the event will be sent directly to Ukraine to provide humanitarian and military aid, supply equipment, and help those affected.

The event featured nine artists, three of whom are Ukrainian.

Diana Grace Newman, a Cardiff resident of Ukrainian descent who sang at the event, said:

“I am thrilled that I was invited to participate in the charity event to raise money for Ukraine, so I can use my talents to support my beautiful Homeland at this extremely difficult time and show how beautiful Ukrainian culture is!”

Since the beginning of the war, Diana has been busking on the streets of Cardiff to raise money for Ukraine.

Journalism student and singer-songwriter who goes by the stage name Azzura also performed at the event. She said: “My biggest hope and goal for my music has always been to help people, through performing at charity events where and through my songwriting itself.

“Since February 24, I have been looking for ways to support Ukraine, through donations and attending charity events to spreading information. To have the opportunity to help raise money through music, allows me to help from far away at a time when I can’t do much else”.

Over 200 people attended the fundraising event which raised £1,246. Kamil Jantos, 27 of Llanrumney, Cardiff, who attended the event said: “The event at the Flora was truly amazing. The organisers did a wonderful job.

“The atmosphere was incredible and there were so many people. I was really shocked to see such a massive crowd of people. I had so much fun and was really happy to be there to support this amazing cause.”

Anna Palamar who runs Anna Palamar Designs was present at the event selling her merchandise. 100% of profits made from each Ukrainian merchandise sale will be donated to support accredited charities to fund immediate emergencies and ongoing needs.

Anna has been screen-printing her Ukrainian-inspired illustrations onto cotton T-shirts and tote bags.

She said: “Millions of people in Ukraine are facing an imminent humanitarian crisis because of the devastating, ruthless war. Their pain is very close to my heart, since many of my relatives and friends are now there, staying to protect their homes, families, and freedom.”

One of her drawings is inspired by a Ukrainian defender figure: with a logo of the Ukrainian Armed Forces on a shield, fighting courageously for his homeland.

The group also holds weekly peaceful protests to pressure western governments to assist Ukraine in the conflict. These protests have been approved by Cardiff Council and South Wales Police.

Protest speaker and group admin Andrii Zhuravskyi. “Our protests are about sending this very important message of collective responsibility we have as humans.”

“I find great importance within these protests, as, sadly, it is easy to forget about the war or easily underestimate its catastrophic impacts.

“We need to carry this unpleasant information, as news channels mostly take a more moderate stance due to not wanting to appear too graphic or switching to other topics.

“Unfortunately, we don’t have the privilege of avoiding it. More than that, we believe that unresponsiveness to such horrors is what fuels them.”

The protests are held outside of the Hayes Library in Cardiff’s city centre every Sunday at 2 pm.