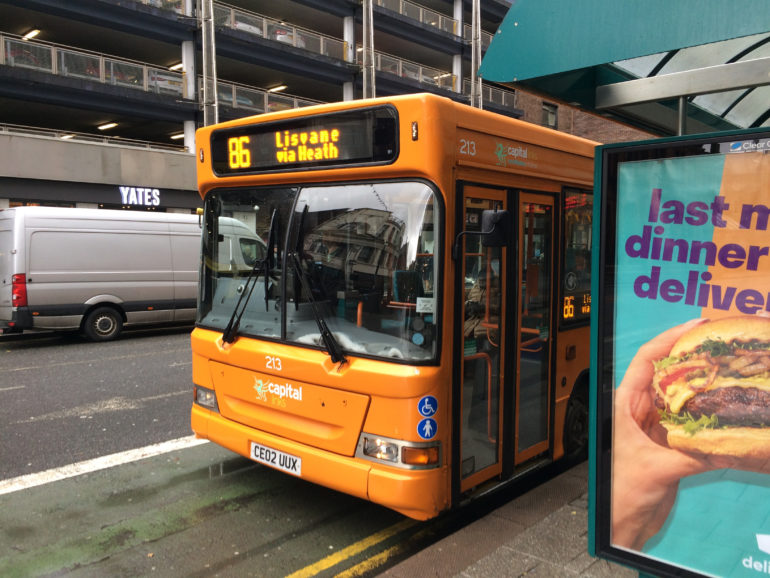 The number 86 bus, one of the six services due to be scrapped, has been saved following extra funding from the council.
Corey Aunger·29 March 2019


THE six Cardiff bus routes due to be cut at the end of this month have been secured for two more years.
This follows an extra investment from the city council – with Cardiff Bus maintaining tenure of four routes and Stagecoach taking over two.
Graham Hinchey, Labour councillor for Heath and cabinet member for children and families, helped set up a petition to save the routes and worked toward securing their safety.
“The bus routes have been secured for two years because we don’t know what the budget will be like in two years’ time,” he said.
“It will give us time to speak to the Welsh Government, about subsidies and a change in regulation.”
Funding for the routes was given by the council through a “bus service social subsidy” initiative.
The council have said it will welcome proposals from the Welsh Government and is aiming to negotiate new legislation to protect services as part of the “improving public transport” White Papers.
There will be no changes to the bus routes and times, other than some services being run by Stagecoach instead of Cardiff Bus:

The change over of services will begin on April 1, a day after the routes were initially meant to be cut.
Coun Hinchey said both bus companies will have consultation on how the services can be made more viable for residents: “The number 86 needs to run earlier in the morning, for example, and later in the evening to make it more profitable.”
A petition was set up by Heath Residents Association when the 86, 51/53 routes through Heath were proposed to be scrapped – in which over 500 people signed.
Coun Hinchey added that the petition was “very important” as it highlighted the significance of the services to the community.
He said: “If you take away the bus routes you’re talking about social isolation. The petition really highlighted the social issue of elderly people and how they depend on the services.”
Caro Wild, Labour councillor for Riverside and cabinet member for strategic planning and transport, has said: “Whilst we have been able to secure these services for a further two years, we may not be in a position to do so if more routes are threatened.
“I would urge Cardiff residents to try to use the bus services over a private car, wherever they are able to do so.”