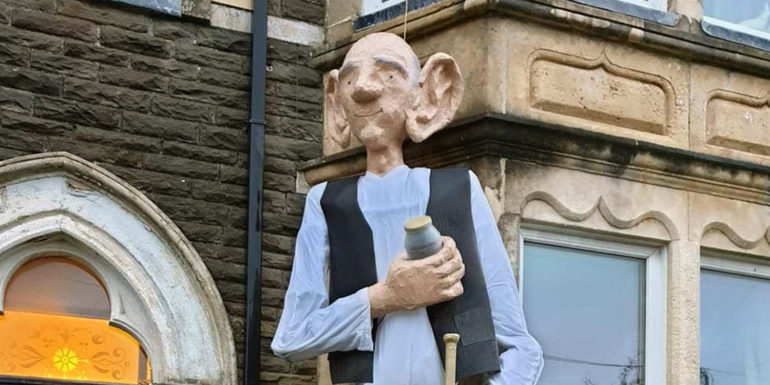 AFTER finding an enormous pair of jeans, Will Steggles decided his entry to this year’s Pentyrch scarecrow trail competition would resemble Roald Dahl’s BFG.

Utilising his skills as a theatre lighting technician, Will, 24, of Heol Goch, ensured the BFG could be seen day and night by incorporating lights into the scarecrow which was voted best on the trail.

It was the “slightly odd mix of creativity and technical skills” which initially drew Will to his job as a lighting technician.

Will, is currently re-training as a domestic electrician after losing his job due to the pandemic, but continues to be “cautiously optimistic” that he will return to the arts industry soon .

Talking about the devastating effects the pandemic has had on the arts, Will said: “These are not people who are doing it as a hobby, these are people who are working at the top of their profession. Professionals who have been training for years, it is very sad.”

The future of the arts industry in Cardiff is uncertain. According to the BBC, Cardiff Bay’s Millennium Centre is considering keeping its doors closed until there’s a COVID-19 vaccine.

According to We Make Events Cymru, a movement providing a voice to the arts industry, the Motorpoint arena now has three members of staff. This is a significant decrease compared to the 42 permanent staff and 400 casual staff it had prior to the COVID-19 outbreak.

Will explains, “It’s not an industry that many people think about, because we’re designed to be invisible. On a normal basis you don’t see the backstage crew.”

Movements such as We Make Events Cymru help to provide those like Will with a voice.

The group has a Facebook page that provides useful information on funding and campaigns for those who work in the arts industry.

Finding himself out of work due to the pandemic, the scarecrow trail was a needed creative outlet for Will. The creation was a family affair and was made of recycled materials including foam, wood and papier mache.

According to Phil Jones, the organiser of Pentyrch’s scarecrow trail, this year the trail received more entries than ever, largely because people had more time on their hands due to lockdown.

The trail has raised over £900, three times the amount raised in previous years, with the money going towards maintaining the local Memorial Park.

A local school studying Roald Dahl have taken an interest in Will’s BFG and he intends for the scarecrow to go to them so the children can enjoy it.

“The most rewarding thing is seeing the reactions of people, especially the children who have come around and been genuinely excited” said Will.

Phil Jones said that residents are already looking forward to next year’s trail and many intend to raise their standards after seeing the impressive entries this year.

The winner of the scarecrow trail was decided on Facebook through a system of one ‘like’ equalled one vote.

Commenting on Will’s BFG, Phil Jones said: “The winner was excellent and was definitely the people’s favourite too.”

Pentyrch Scarecrow Trail is an annual event that the community look forward to each year. This year it has been particularly effective in bringing the community together during the pandemic.