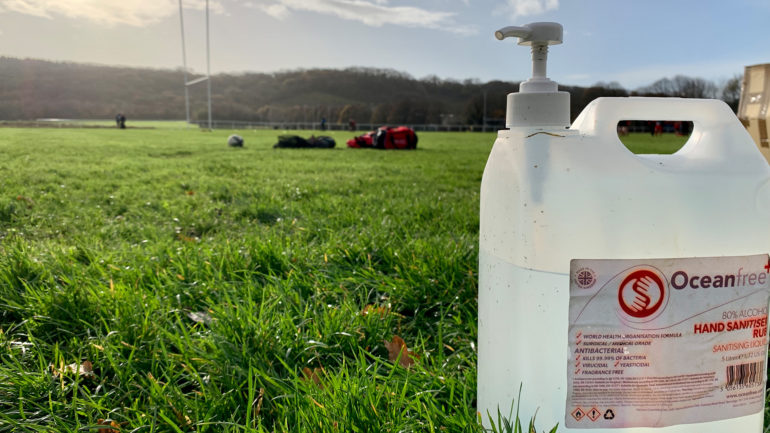 Children’s rugby training resumed at Trelai park this Sunday after a four-week prohibition over lockdown. Caerau Ely Minis and Juniors Rugby reassured parents that all training will follow the Return to Rugby guidelines set out by the Welsh Rugby Union.

Disinfectant was allocated to each age group at Trelai park and the club’s track-and-trace system was in full operation. Children were also separated into smaller groups while training to minimise contact.

Club co-founder Liam Mackay said: “Some parents and coaches are understandably still worried or scared and need time. We’re not pressuring anyone to come back but we are doing as much as we can to inform people of the guidelines and minimise risk.”

The WRU guidelines, updated on November 7th, allow groups of up to 30 to train together, provided they are split into smaller groups and sanitation breaks occur every 20-minutes. Tag rugby session can be run at the end of a session, but rugby balls and hands must be sanitised before and after.

WRU Community Director Geraint John said: “We want everyone to come back to the game safely and for the long-term. That means asking coaches, players and their parents to stick to the sustainable measures club volunteers have worked so hard to achieve to ensure club environments are as safe as possible.”

Under Welsh Government guidelines, more than 30 children aged under 11 can partake in outdoor activity together. However, the WRU has asked rugby clubs not to exceed this number.

“We recognise that our protocols are well within the parameters allowed by Welsh Government guidelines, particularly for under 11s, but we know it is safer to train within smaller groups. We want to do what we feel we should do to help the situation and not what could be done within the rules,” Mr John said.

The WRU’s ban on full-contact rugby had worried club co-founder and manager Johanna Lovell that older children would not return to the club after lockdown. But Miss Lovell was pleased to see one boy in particular making a return on Sunday.

“He’s a grown-up boy and he wants to tackle. I didn’t think he would come back but no, he is here – he just wants to see his friends,” Miss Lovell said.

Caerau Ely’s Minis and Juniors have been active in their local community during the coronavirus pandemic, distributing PPE and running a Down syndrome awareness campaign.

“We try to give back to the community which keeps us afloat,” Miss Lovell said. “At the start of the pandemic we realized we had a lot of parents working without the right PPE, so as a club we had some made and gave them to whoever needed them.”

The return of training has been welcomed by many at the club.

Coach and parent Norman Rees said: “Our kids come from diverse backgrounds. A lot of their parents are frontline workers who have been hit hard by Covid. It’s nice for them to get away from everything that’s happening at home for a bit.”

Lauren Oliver is mother to Chloe who has Down syndrome and is a regular player at the club: “The club is amazing. Chloe has special needs and has been included brilliantly, everybody at the club loves her.”

Caerau Ely Minis and Juniors Rugby was founded by Liam Mackay and Johanna Lovell in 2017, who noticed the lack of a club in the local area.

“I wanted to offer young people in our area the same opportunities that rugby has given me,” Mr Mackay said. “One of our highest priorities is keeping everything as affordable as possible.” The club buys all its kit locally and keeps annual membership fees to a minimum.