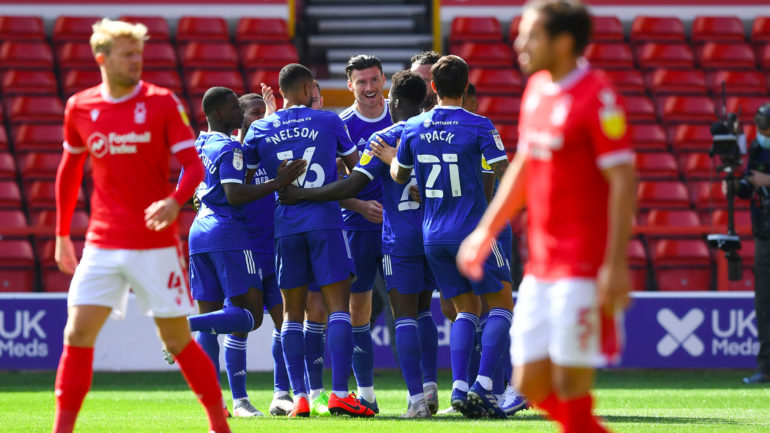 Cardiff City: The story of the season so far

CARDIFF find themselves in ninth place, looking to improve on an oh-so-close play-off loss against Fulham last season.

Neil Harris’ men have struggled at times to score goals and have been involved in plenty of low scoring ties since the start of the new season, but things have started to look more positive in the last month.

The team has found themselves increasingly reliant on new singing Kieffer Moore who has eight goals so far this season, five more than any other City player.

Let’s take a look back and review Cardiff City’s season so far.

The season began with an upset from the first whistle, as Cardiff suffered a 3-0 loss away at recently promoted League One side Northampton Town in the Carabao Cup.

New loan signing Jordi Osei-Tutu gave away a penalty in the first half and Northampton piled on the pressure to score two more goals quickly after half time.

The Bluebirds were without Kieffer Moore and Harry Wilson at the time, but really should have performed better against a weaker team.

One cup run was gone just as quickly as it had even begun.

On the opening weekend of the Championship season, they were the victim of another upset as Sheffield Wednesday scored two first half girls and then thwarted all Cardiff attacks to finish the game 2-0.

Cardiff controlled possession and had a decent penalty appeal but, in reality, they were comfortably second-best.

However, they responded a week later with a 2-0 win over Nottingham Forest.

However, things came undone again as the Bluebirds struggled at home against a strong Reading side, losing 2-1.

October was a rough month for Cardiff, who were involved in four draws, all of which had 2 or less goals.

The match against Blackburn set the tone, as Lee Tomlin was sent off in his first appearance of the season.  The positive sign was that Cardiff’s defence was improving as it held off a free-scoring Blackburn attack.

Their only win of the month came straight after, as Sheyi Ojo scored his first Cardiff goal to decide a 1-0 game against Preston North End.

Next came three 1-1 draws against Bournemouth, Middlesbrough and Derby County. While all were far from boring games, Cardiff City failed to separate themselves and each time were forced to score second half goals to come from behind.

Finally, Cardiff conceded an injury-time winner against Queens Park Rangers to give the London team their first win of the Championship season since the opening weekend.

The Bluebirds were poor and Harris called it “the worst he had seen during his time in charge.”

It meant that Cardiff had dropped to 17th in the Championship table, only getting 10 points out the first 9 games. They found themselves only 4 points away from the relegation zone.

The start of November seemed like it would see a change in the team. In a midweek game the Bluebirds comfortably won 3-0 at home to Barnsley. It was the most goals they had scored all season and their first home victory.

But it wasn’t all positive. Cardiff playmaker Lee Tomlin suffered a serious groin injury that required surgery, putting him out of actions for months.

It wasn’t to be the change Cardiff had wanted, only managing 1 point out of the next three games. They loss to Bristol City and Coventry while only rescuing a point late against Millwall.

The loss against Coventry was particularly troubling, allowing them to escape the relegation zone with the result.

Boss Neil Harris said that the team had become “masters of our own downfall” after they gave away cheap goals in winnable matches.

City were now in 18th place, and pressure was piling up on Harris to turnaround performances.

A few days later, they did just that. A comfortable 4-0 win against top-half Luton Town was exactly what they needed to boost morale.

It also came with a change of formation as Neil Harris switched out his usual 4-2-3-1 formation with a 4-4-2 system.

The system seemed to surprise a poor Luton, as they scored two goals in the first 10 minutes of the game from Sean Morrison and youngster Mark Harris.

Despite winter nights getting darker, Cardiff City’s future looked much brighter in a Tuesday evening home game against Huddersfield town.

The team had another commanding performance, finishing the game 3-0 up and securing back-to-back wins for the first time in the young season.

Kieffer Moore once again showed his ability as he scored a brace after capitalising on defensive mistakes. The game was finished off by fellow striker Robert Glatzel who ensured the Bluebirds would be taking all the points.

Cardiff then made it 3 on the bounce with a surprising win away at promotion contenders Watford. The Bluebirds spent much of the game on the back foot but were defensively sturdy to prevent a Watford comeback.

Kieffer Moore was once again the difference as he scored his fifth goal in five games.

In their most recent match, Cardiff City made it four wins in a row when they came from behind to beat an injury plagued Stoke City team.

Captain Sean Morrison had an incredible game, scoring an own goal and conceding a penalty before scoring the winning goal to secure his 100th win at the club.

The full match report can be found here.

The Bluebirds now look forward to the South Wales derby with Swansea on Saturday and have been drawn away at Nottingham Forest in the 3rd round of the FA Cup.