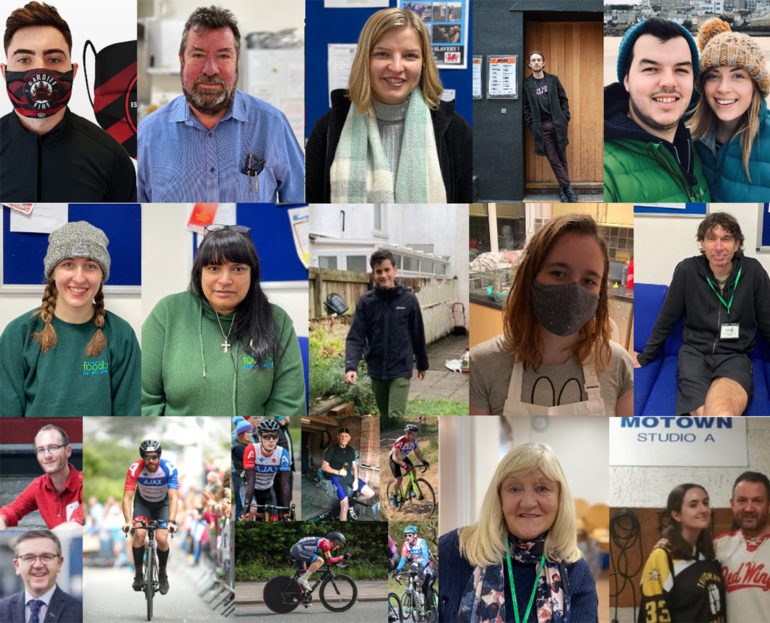 Faces of the Food Bank

Meet the volunteers and fundraisers making a difference in Cardiff

Cardiff’s food banks, like many across the UK, are increasingly depended on by individuals and families who would otherwise go hungry. In fact, the Trussell Trust say 1 in 5 people in the UK live below the poverty line.

Cardiff Foodbank is run by the Trussell Trust network. Across the city, they have provided 15,000 food parcels to people in crises this year. 39% of these went to children.

The Trussell Trust provided more than 70,000 food parcels between April and September across Wales, which is a 21% increase on the same period last year. The charity has 117 distribution centres in Wales, operating in 22 local authority areas.

The top three reasons given for someone using the food bank in the trust’s network in Wales were low income (49%), benefit delays (10%) and benefit changes (8%).

Nationally, the charity supplied over 1.2 million emergency food parcels across the UK during the pandemic. This makes it the busiest ever six-month period for their food banks.

Cardiff Foodbank relies on its network of volunteers who work in teams across the city. Due to the pandemic, these teams work on specific days which do not cross over, to reduce the risk of a Covid outbreak.

Here’s the story behind one of those teams.

Cheryl recently retired from her job as a dental nurse. She had always wanted to give up some of her time for a food bank, and also works at Barnardo’s Charity shop in the Thornhill area of Cardiff.

“I initially applied earlier in the year, but I was told that the food bank had enough volunteers. I knew someone who worked there who told me when there was a vacancy. I have been working here now since the summer.”

“We have lots of memorable days and clients that we remember”

Kaye is a trainee accountant, who has been working from home since March. When she heard that the charity needed volunteers, she applied.  She started working at the food bank this summer.

“Working here is a reason to come out and see real people. With working from home, you’re just in the house all day. It’s nice to get a chance to talk to people.”

David retired earlier this year from his role in the civil service. He has worked with the food bank since June and spends most of his week volunteering with his team or working at the warehouse.

“The first thing I noticed was how generous people are. The donations are sometimes overwhelming. I only started working here during Covid, so I haven’t known anything else, but people have been so generous.”

“People have been so generous”

Evie is a full-time student at Cardiff University. She is in her final year, but still gives up her time to work at the food bank. At the start of the pandemic, she volunteered as she knew that many volunteers are older and may have had to isolate at home.

“We do have lots of memorable clients. It can be really nice to give the parcels out sometimes. I remember one woman who came in that had nine children, and she had been struggling for a while. The look on her face when we gave her the parcel was really special. She didn’t know it would be so much food.”

“The look on her face was really special”

John has worked at Cardiff Foodbank for around two years. He first started when he got back from his year off work in France. With a month to fill before starting a new job as a HR manager, he decided to volunteer.

“By the time my application had gone through and all the induction was finished, I had already started my job! But I really enjoy working here and I have been here ever since.”

Gauri is one of the longest-serving members of Cardiff Foodbank. She decided to volunteer after using the service herself a decade ago.

She splits the rest of her time among her other roles as preacher, music teacher, domestic abuse advocate and mother.

“Volunteering was payback, really. I had to use the food bank myself, so I know how some of the clients feel” she said.

Gauri says that many people who have used the food bank in the past then go on to support their communities and give back when they are back on their feet.

“It can be a beautiful experience to work here, but you also get to see real desperation of people.”

Gauri strives not just to give food to the clients, but to give them a place where they can come and feel welcome.

“It’s all about lifting each other up. You are never more than a few months away from needing a food bank”

Across Wales, the resilience of volunteers in food banks has been nothing short of outstanding. They have been working hard under extremely difficult circumstances to make sure support is there for people struggling to afford essentials with the generous support of their local communities.

Susan Lloyd-Selby, Operations Manager for Wales at the Trussell Trust

These financial donations are to cover costs such as warehouse hire, transport and paying the wages of employees.

Generosity this year has been such that the charity have asked for any more food donations to be held off until the new year, making fundraising more important than ever.

Here are some of the people who have been supporting Cardiff Foodbank financially:

Luke is 29 and works for the NHS along with his fiancé Jordan, 27.

This year they set up an online appeal to raise money for Cardiff Foodbank. They raised £500 along with food donations, with the help of their colleagues.

Luke said: “This year with everything that is going on, people have been struggling for money. We wanted people to be able to have a nice Christmas.

“We did a collection last year, but just for food. This year we thought it would be better to ask for money, as we know the charity needs it.”

“We wanted people to be able to have a nice Christmas.”

Wild Thing Foods was set up this year by 46-year-old Admiral employee Johnathan Williams and his two daughters, Sophie (left) and Caitlin (below). Johnathan’s love of cooking is now being shared with the people of Cardiff who can support the food bank at the same time.

Supporters can order curries and Christmas dinners from Wild Thing and choose how much to donate. All proceeds go to Cardiff Foodbank.

“At the start of the year we wanted to help out local food banks. And we knew they needed financial donations more than food” Sophie said.

Johnathan and his girls knew they wanted to do something different, rather than simply creating a fundraising page.

“There are so many pages across social media just asking for donations. We wanted to do it this way to uplift the community at the same time. In some ways we thought it may encourage people to get involved.”

Sophie, who works as a journalist, manages the social media accounts, and her sister, who is an art student, designed the logo.

With a target of £500, the Thornhill family look as though they will meet their goal. So far, they sell out of orders in advance of their weekend collections, and have even received financial donations from people who live too far away to benefit from Johnathan’s cooking.

The school run a carol service every year, but in true 2020 style, this year it was virtual. In lieu of a collection, the school set up a fundraising page, which generated £400 for Cardiff Foodbank.

Chaplain Ian Davies said: “We chose to support the charity as it is something we have done previously and had a very successful appeal last year. The option to donate money was taken as we know the charity needs money as well as food donations.

“We always have a collection at the end of our Carol Service at Llandaff Cathedral, but due to current restrictions, we weren’t able to hold our usual event and so created a link for anyone to donate to the charity.”

The club raised £3,020 during lockdown for Cardiff Foodbank.

Six members completed a virtual Everest challenge, where they climbed 8848m. This meant 10-12 hours on a bike for each of them.

Jake Bailey said: “I chose Cardiff Foodbank because my eight year old daughter got upset at all of the homeless people in the City Centre and was worried about them being hungry.

“I wanted to do something to show her that people care and that there are people like those at Cardiff Foodbank who look after those in need.”

“I wanted to do something to show her that people care”

Andrew supported the food bank during Ramadan, when he and his colleagues completed an 18-hour fast for food poverty. They raised over £1,500 in total.

Andrew said: “Muslims fast each year to empathise with people who don’t have easy access to food and donating to charity is also an important part of Ramadan.

“I wanted to donate the money to a cause which focused on food, to tie it in. Food poverty is an issue I’m interested in and so the Food Bank seemed appropriate.”

26-year-old Sam works as an automotive technician. But it’s his other job as an event promoter that made his fundraising possible.

“It seemed like a really important cause, especially this time of the year. I’ve done several fundraisers this year during lockdown, mostly running for charitable causes such as NHS PPE and Cardiff Dog’s Home, but I felt I could do more.

“In order to raise whatever I could, I arranged for an online raffle where anyone could pay a few pounds and be in with the chance of winning a decent prize.”

When Sam set up the online raffle, he only had a few prizes. But donors such as Depot and Tiny Rebel made it possible to offer prizes to 20 winners.

“We raised £430 for the food bank, and if possible I’ll run another raffle fundraiser in the new year.”

“It seemed like a really important cause, especially this time of the year”

The club used sales of Fire Face Masks to support Cardiff Foodbank this year. In total, sales raised £220 for the charity.

James Assinder, operations manager and designer of the face masks said: “The Fire are proud to be fundraising for such an important service in the local community and we are pleased so many fans have shown their support for the tremendous work they do by purchasing our face masks.”

Combined with fundraising for NHS Wales, the team raised a total of £742 for charities over lockdown.

13-year-old Jacob was confined to his house for his birthday, after coming into contact with someone who had tested positive for Covid.

He decided to use this as an opportunity to raise money for Cardiff Foodbank, and started walking laps of his garden, with the aim of completing a marathon.

Jacob said: “It was mentally tough to do so many laps of the garden all on my own. But what kept me going was the thought of being able to help other people at such a tough time.”

Jacob was particularly concerned about children going hungry. He raised almost £2,500 for the charity.

This pandemic has shone a light on the  difference  we  can make  when we come together - we’ve made huge changes to the way we live, work and support each other. Together, we can end the injustice of people needing food banks. We can build a hunger free future.

Susan Lloyd-Selby, Operations Manager for Wales at the Trussell Trust

While Cardiff Foodbank are supported by a network of volunteers and fundraisers, they are always happy to receive extra support from the community.

The charity are asking for financial donations in the run up to Christmas, so that they continue to provide their services for families across the city.

You can support them here: 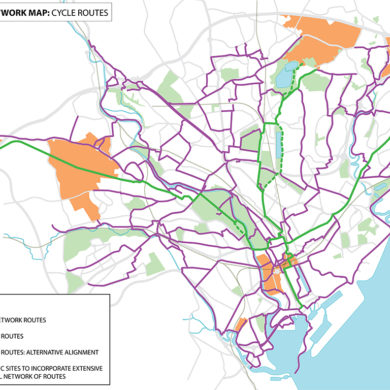