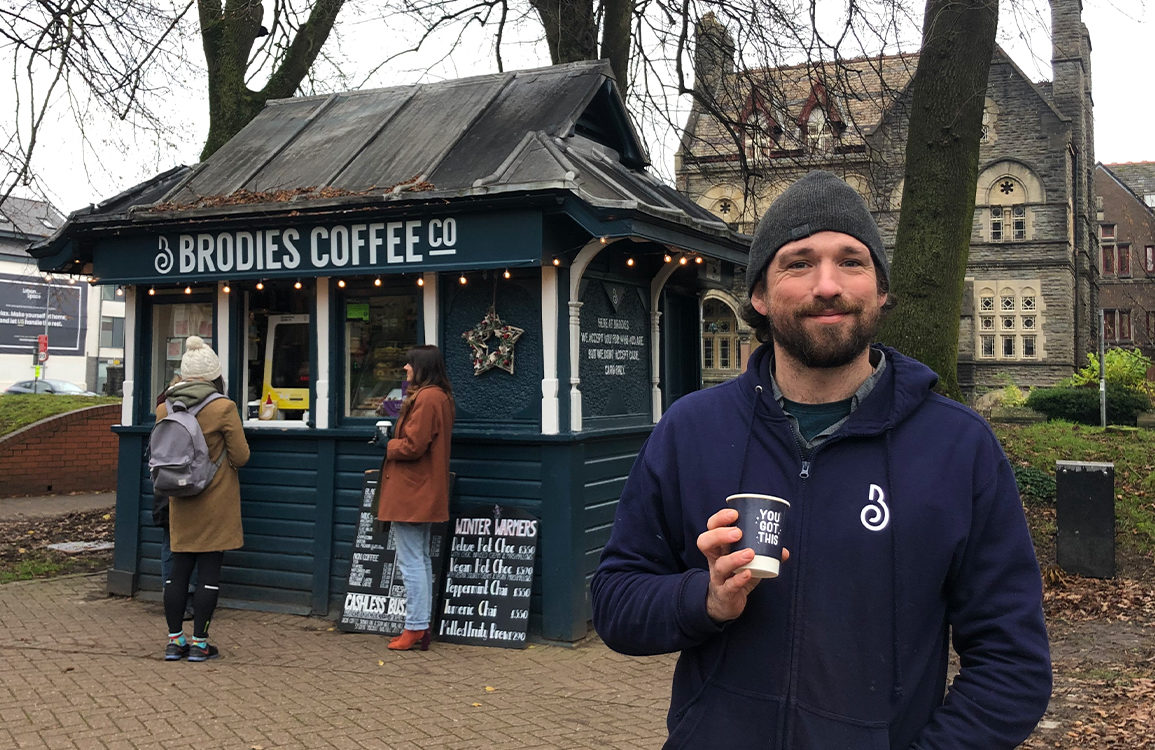 Poems, weddings and helping the homeless – 2020 at ‘The Quaint Little Shack’ that serves coffee to Cardiff

2020 has been a year many would choose to forget, but Brodies coffee shop has been a much needed ‘spot of kindness’

IN 2020, unprecedented became the norm.

It has been an overwhelming year, filled with breaking news alerts warning us of chaos and sadness.

But there have been moments of light. Neighbourhood support groups, drunken zoom quizzes, perfected banana breads. Within the extraordinary mayhem of 2020, people have tried to carve their new ordinaries.

For some Cardiff residents, their new ordinary has been their daily coffee, brewed in a small blue cabin nestled in Gorsedd Gardens.

This everyday ritual is no longer a mere caffeine kick, but a link to a community defined by positivity and joyfulness.

The cabin is home to Brodies Coffee Company. Started by Ian Brodie and his wife in 2013, Brodies moved from a VW Camper to the former park-keeper’s hut in 2016.

“We’ve evolved a lot since we arrived,” said Ian.

“Everything’s changed a lot over the years but only ever for the better”.

This year, things have changed more than usual. But Brodies has adapted with grace, becoming a space to escape from the wilderness of 2020.

2020 may not have turned out as expected, but seen through the eyes of Brodies Coffee Co and its regulars, it might have been more joyful than it seems.

Gorsedd Gardens, where Brodies is based, lies just beyond the city centre.

A path snakes between wide flower beds, with statues dotted from one end to the other. The garden is quiet, trees shielding it from most of the traffic noise, and the marbled pillars of the National Museum glint in the distance.

Over Christmas however, the area is transformed as Winter Wonderland descends on the neighbouring City Hall Lawns, complete with ice rink, fun-fair and fireworks.

But this year it wasn’t just major events gracing Gorsedd Gardens. Brodies partnered with White Label Bakery in January, while for Pancake Day in February, Artisan Crepes dished out piping hot pancakes from the cabin.

Meanwhile, although the first case of Covid in Wales was only reported on February 28, the country faced chaos of a different sort as it was battered by storm after storm.

Storms Ciara, Dennis and Jorge led to widespread flooding, sports fixture cancellations and even a shortage of Gregg’s breakfast rolls.

March crept forward bringing with it sweeping lockdowns across Europe. Toilet paper disappeared from the shelves and sales of hand sanitiser rocketed.

On March 20, Brodie’s removed all seating and went takeaway only.

Along with small business up and down the country, Brodies shut their doors with no idea when they might be able to open up again.

However, as the cabin fell silent, Ian took Brodies’ positive ethos online, and his home-brewing tips on Instagram kept followers caffeinated during lockdown.

“We closed for that first one, the lockdown, when no one really knew what was going on,” said Ian.

“If we opened we were encouraging people to come out,” he continued, “and no one really knew what we were dealing with.

“To keep myself sane I threw myself into instagram a bit more – we were doing coffee tutorials and Q&As, and we found our audience really grew through that”.

Lockdown rolled into May, and Ian moved from demonstrating the perfect espresso to providing door-to-door cake and cold brew.

“About four, five weeks into lockdown we started making plans, we came down here with our paintbrushes and did the new signage,” said Ian.

“Then I started doing deliveries. That was really surprisingly popular”.

“When we reopened after lockdown, I very genuinely believed I was going to open to an empty park and just stand watching YouTube all day,” he said.

“And then we opened up and within about five minutes we had a queue the length of the gardens, and it was just so reaffirming, that gave us the incentive to keep going”.

Ian wasn’t the only one embracing the return of coffee to the gardens.

Mia Shah, 23, became a regular at Brodies just after it reopened.

“It [Brodies] was one of the first to open,” Mia said, “it was so lovely to sit on the grass in the sun with amazing coffee”.

As Mia and the rest of Cardiff reemerged after lockdown, anti-racist protests swept across the globe.

Cardiff was no exception, the city saw protests in Bute Park and outside Cardiff Castle and the Senedd.

In June, Brodies committed to donating 10% of their merchandise sales to Black Minds Matter.

“Its a fantastic project,” Ian said in an Instagram post, “that deserves all the support we can muster”.

In February 2019, Ian launched Brodies’ suspended drink initiative, which allows people to spend £2.50 – or a full loyalty card – and mark a coffee on a board in the cabin.

These suspended coffees are then available to anyone unable to afford a hot drink, often with a large slab of brownie or flapjack alongside.

July 2020 marked 1200 suspended hot drinks since the start of the initiative.

For Kara Noblett, 35, the scheme is one of the many reasons she loves Brodies.

“Aside from the excellent hot chocolate, I love the vibe that they put out,” Kara said.

“The commitment to having drinks on the board for the homeless population in the city, the friendliness of the staff who are always up for a chat even when its busy, they’re a spot of kindness in what can sometimes be a harsh world, and that’s been needed this year more than ever”.

Another milestone was passed in August, when Brodies celebrated the four-year anniversary of its arrival in Gorsedd Gardens.

This year, celebrations in all shapes and sizes have been somewhat muted. But in typical Brodies fashion, they marked the occasion with new cups marked with their signature ‘You Got This’ motto.

These three words have played no small part in Brodies position at the heart of the local community, and have become even more resonant in 2020.

“Ian and Jo are both so generous with their time and always make sure you leave feeling a bit better than before,” said Mia, adding: “Brodie’s is also very socially conscious, which is incredibly important, especially this year.”

September saw students returning to university, school-children returning to school – and lockdown returning to Cardiff. As businesses shut their doors once more, Ian and his team decided to stay open.

“Because we’re an outdoor location we’ve benefitted from being able to be open fairly uninterrupted,” said Ian.

“We’ve been open on limited hours, because there’s no offices, so it makes no sense to be open in the mornings – 9:30am til 4pm is a really nice middle-of-the-road scenario”.

But never one to leave others behind, Brodies added Ty Melin bakery to its list of partners, serving their delicious almond croissants to confused freshers and exhausted regulars alike.

Although October was a month marred by lockdown and firebreak, some hope could be found in Gorsedd Gardens.

Brodies might not be a typical spot for a wedding reception, but it has hardly been a typical year. So regular Brodies-drinker Jordan Cuff, 27, and his wife Bhavana decided there was no better place to visit after tying the knot in October.

“We went to Brodies partly down to restrictions, but also because of how lovely they always are,” said Jordan.

“We couldn’t have most of our family there, so rather than think about all the bougie food, we donated one coffee for each family member – about thirty”.

Firebreak lifted in November and naturally, thoughts turned to the Christmas conundrum.

But at Brodies, political debates seemed abstract and convoluted compared to a poem that beautifully encapsulated the impact of the little blue cabin.

Gareth, a Brodies regular, is also part of Cardiff’s homeless population. In late November, he dropped off a poem – ‘The Quaint Little Shack’ – to thank the team for providing “lovely warm coffee from lovely warm souls”.

Looking back on 2020, many people will want to pretend the year never happened. But the Brodies community is closer than ever.

“They’re just really decent people trying to be a bright part of this city on their own terms,” said Kara, “and that’s something I admire”.

There remains uncertainty, chaos and sadness, and it is naive to think a feel-good Instagram feed and coffee cup can solve the world’s problems.

But sitting one of those bright blue chairs, looking out towards green lawns on one side and a bustling city on the other, you can take a moment to breathe and remember: