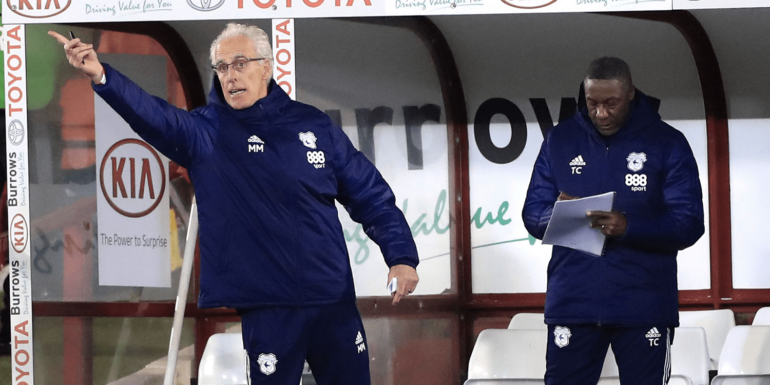 Boss takes charge of his first home game as Bluebirds manager on Saturday against his former team.

CARDIFF fans would have been forgiven for feeling a sense of déjà vu on Wednesday evening. In Mick McCarthy’s first game in charge, the Bluebirds were 2-0 down away at Barnsley, but scored two second half goals to earn a point.

14 months ago, his predecessor Neil Harris had taken the reigns for the first time, also away from home against a team wearing Red (Charlton Athletic) when City found themselves 2-0 behind, before scoring twice in the second half to earn a draw.

McCarthy is unlikely to be too different from Harris in his time at the helm in the Welsh capital. He has only been given a contract until the end of the season and will be tasked with simply steadying the ship and injecting a shot of confidence into the squad.

If you watched just the first half at Oakwell on Wednesday, you would not have been able to tell that a change of manager had happened.

Cardiff were sluggish, lost possession far too easily and could not get into the game. They deservedly trailed by one goal at the break and were lucky they weren’t further behind.

When Cauley Woodrow doubled Barnsley’s advantage seven minutes into the second half, the Bluebirds looked consigned to a defeat.

But as the game wore on, there was evidence that McCarthy might be able to get more out of this City side than Harris did. For starters, he was able to galvanise the players to fight back and take a point, crucially ending the team’s run of six consecutive defeats.

It was the first time since last February that Cardiff had come from two goals down to take something from a game.

This was aided by McCarthy being tactically proactive, as he brought on Josh Murphy early in the second half and Sean Morrison soon after.

This led to a switch to a 3-4-2-1 formation that made the Bluebirds far more dangerous, allowing full-backs Perry Ng and Joel Bagan to push further up field and unlock the creative abilities of Murphy and Sheyi Ojo.

Wednesday’s game also showed that McCarthy has wiped the slate clean for City players, and that everyone will have to fight for their place in side.

Harry Wilson, who had started the final 16 games of Harris’s tenure, was dropped to the bench and was not brought on. Meanwhile, Aden Flint, whose time at Cardiff looked to be over when he was loaned out to Sheffield Wednesday earlier in the season, started for the Bluebirds in the Championship for the first time since the first day of 2020.

Similarly, in coming on as a 50th minute substitute, Josh Murphy got more game time than he did in any of his previous six league appearances.

“I’m sorry, did I come to a club where there was some gilt-edged positions for players?” McCarthy said post-match at Oakwell. “Because nobody told me and that ain’t going to happen, ever. You’ve got to get in the team and when you get in the team you’ve got to stay in the team.”

His team selection for his first home game in charge against Millwall – a team McCarthy used to manage – on Saturday then will be eagerly awaited.

It is a game that Cardiff must look to win if they want to kick on up the table. Millwall are currently on the same number of points as the Bluebirds (30), but sit one place below them due to a worse goal difference.

The Lions have won just two of their last 17 league games, but they are the division’s draw specialists, drawing 12 of their 25 Championship games season – including against Cardiff in November and in their most recent match against promotion-chasing Watford on Tuesday.

This is largely due to their struggles in front of goal, but also a sturdy defence that Gary Rowett has forged at The Den. Only five Championship teams have conceded fewer times than Millwall this season.

The most intriguing battle awaits at set-pieces. Cardiff have scored 15 goals from dead ball situations this season (non-penalties), six more than any other team in the Championship, which makes up 47% of their total goals.

Both of their goals on Wednesday against Barnsley came from corner kicks, and with 6ft 6in Aden Flint back in the team, City will surely continue to utilise that strength.

However, Millwall have conceded the fewest goals from set-pieces (three) in the division this year and are themselves a physical team. It is unlikely that Saturday’s game at the Cardiff City Stadium will be one for the purists.

Not that that has ever bothered Mick McCarthy, who has said he is hoping for a “blood and thunder game” as he aims to get his first win on the board in the Welsh capital.