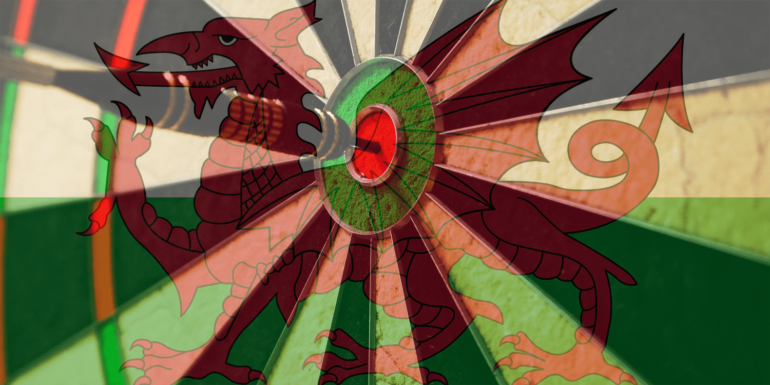 IT has been a busy 48 hours for Dylan Williams. Not only has he been home-schooling his children, but he has appeared on radio, television and done multiple interviews discussing something which he only thought would be a hobby.

Williams, who works for the Welsh Government, is a darts fanatic and set up the PDC Cymru Twitter account in April 2019 to help channel his love for the sport.

“People often ask me did I have a crystal ball!,” says Williams says. “I could never have imagined the success of Welsh darts over the last couple of years. Running the account is almost like a full-time job now.”

On Sunday night, Llanelli native Jonny Clayton won his first individual televised PDC title by coming from 5-3 down to beat Mervyn King 11-8 in the Masters final.

It had been a sensational tournament for Clayton, who had got past world number two Michael van Gerwen and number three Peter Wright on route to the final.

The title provided the second bookend for the month of January that started with fellow Welshman Gerwyn Price winning the distinguished PDC World Championship for the first time, becoming world number one in the process.

That capped an incredible year for Cardiff-born Price, who also claimed victory in the World Grand Prix and World Series of Darts in 2020. In addition, Price and Clayton played as a pair in November’s World Cup of Darts and won the tournament for Wales for the first time.

Simply put, Welsh darts has never been in a better place. No other country in the world can claim to be as good at the oche right now.

“Wales has always been a hotbed for darts,” says Williams.

“There has been a steady fanbase since Leighton Rees won the inaugural BDO World Championship in 1978. But nowadays there is far more media coverage and therefore more exposure, meaning there is a wider reach.

“Gerwyn has been a driving force behind that too, and as his career has gathered momentum over the last few years, so has the popularity of the sport in Wales.”

The outpouring of Welsh pride on social media after Price and Clayton’s recent victories has been phenomenal. There is always a buzz whenever a Welsh sports personality does well on the world stage, whether it is Geraint Thomas winning the Tour de France or Gareth Bale lifting the Champions League, but now darts has joined the party. This wave does not look like stopping either.

It begs the question – could Wales have found itself a new national sport?

Now, this is a big claim. Rugby is as synonymous with Wales as daffodils, leeks and Sir Tom Jones, and Six Nations fever will once again grip the nation when it begins this weekend. Football of course has worldwide appeal, and has increased in popularity in Wales since the national team reached the semi-finals of the 2016 European Championships.

Yet both sports are currently experiencing slight lulls, not helped by fixtures being played behind closed doors. Wayne Pivac’s first year in charge of the rugby side has been underwhelming, while the football team has its own managerial issues as Ryan Giggs is approaching a court date over an alleged assault on his girlfriend.

Darts, known for its wacky fans, is also suffering from an absence of supporters, but is still a fantastic television spectacle thanks to its fast-paced and dramatic nature.

Price’s route to World Championship glory, particularly his semi-final against Stephen Bunting and the final against Gary Anderson, was enthralling to watch, and Clayton’s performances in the Masters on Sunday were sublime. It has been impossible to take your eyes off the Welsh brilliance.

“The Welsh passion is the best in the world, and people certainly feel a sense of national identity when they see Gerwyn and Jonny doing so well,” Williams says.

“The reaction on social media has been crazy and like nothing I’ve seen before.”

There is no doubting that the mesmerising play of Price and Clayton has driven the darts mania, but the Welsh public have also fallen in love with their charismatic characters.

Price has always been a Marmite individual in the world of darts thanks to his outspoken personality and on-stage antics, but fans have warmed to “The Iceman”’ over the last year.

You could not help but smile as he lifted the World Championship trophy, completing what he believed to be his destiny. Only seven years ago, Price was playing rugby for Neath.

Clayton is also a former rugby player and still works as a plasterer for Carmarthenshire County Council. The photo of “The Ferret” tucked up in bed on Sunday night with the Masters trophy, complete with sunglasses, a thumbs up and big cheesy grin, personified his happy go lucky character.

These down-to-earth insights – see also Price returning home with the World Championship trophy – make the pair more relatable than the stars of rugby and football.

“They’re the sort of people that you could see walking to the shop to get a pint of milk and you would give them a toot of your horn!” Williams says. “People have really connected with their journeys and have wanted them to do well.”

Clayton’s victory at the Masters earned him the final spot in this year’s Premier League of Darts, which Price will also compete in along with eight of the other best players in the world. Clayton is ranked 18th, but will have ambitions of climbing even higher.

The 46-year-old has admitted that he is considering quitting his plasterer job to play darts full-time, and that may open the possibility of two Welsh players being regulars in the coveted top 16.

Meanwhile, Price faces the challenge of keeping hold of the number one spot, which he will not want to relinquish easily after ending Michael van Gerwen’s seven year reign at the top of the pecking order.

The Premier League of Darts tours the UK and Ireland (as well as making trips to Berlin and Rotterdam), with the opening round of fixtures set to be held at the Motorpoint Arena in Cardiff. The start date has been pushed back and it is now expected to begin around Easter time, so there is a hope that at least some Welsh fans will be able to give Price and Clayton a hero’s welcome.

“I think darts is still fighting against some people’s belief that it is a pub sport, so for that reason it probably won’t ever reach the same heights as rugby or football,” says Williams when asked about the sport’s future in Wales.

“That perception is changing, and again Gerwyn has helped with that because he has retained his rugby physique. He does not look like your typical darts player.

“Gerwyn is also proof that you can go from Qualifying School [which gives players the chance to compete on the PDC circuit] to world number one, and that will inspire younger players.

“Media coverage is improving too, and I hope one day that darts will be covered as an all year round sport, rather than something that just happens at Christmas when the World Championship is on.”

If Price and Clayton’s success rate continues at the speed it is currently motoring at, then you can be sure that darts – or dartiau – will never be far from Welsh consciousness.