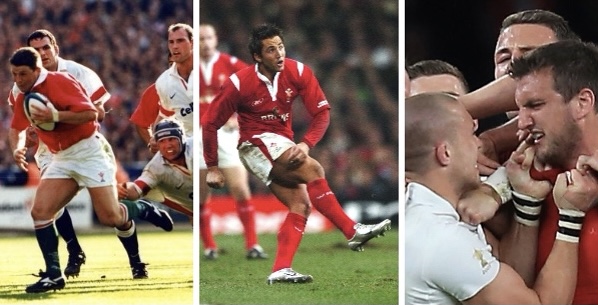 Ahead of their Six Nations meeting at the Principality, we recall five iconic Welsh victories

The last ever game of the Five Nations, held in Wembley Stadium because the Millennium is not yet built.

England are hunting a Grand Slam title and only Wales stand in their way. Wales have not beaten England for six years.

England score from open play four minutes in. Two more tries extend their lead but Neil Jenkins slots six penalties for Wales in the first half, keeping them in the game.

A quick start to the second half sees Shane Howarth finish neatly in the corner for Wales after penetrating charges from Colin Charvis and Scott Quinnell, but two penalties from Jonny Wilkinson restore England’s lead.

60 minutes in, Jason Leonard is shown a yellow card. He stays on the field because the 10-minute sin bin has not been introduced yet – penalty only.

After 83 minutes on the clock, Wales have a line-out on England’s 22. Three men in the line, they take it off the top and spin the ball out to Scott Gibbs.

It is the opening weekend of the tournament and Wales are looking to beat the world champions in Cardiff for the first time in 12 years.

After 10 minutes the English lineout is not firing. Following a third lost throw, Shane Williams makes England pay with a trademark finish in the corner, his first ever try against England.

England second row Danny Grewcock is shown a yellow card for “reckless use of the boot” on Dwayne Peel’s face. Gareth Thomas joins him in the sin bin after racing over to inflict retribution.

The England pack comes out firing for the second half and steadily gain the upper hand.

With 10 minutes to go, England slot a penalty, taking the lead for the first time. 8-9.

Wales win a penalty 45 metres out, close to the right-hand touchline. It is a big kick even by today’s standards. Step forward Gavin Henson.

On his debut, with shaved legs, Henson slots a monstrous kick and clinches victory for Wales.

“It’s difficult to get across how much class he has – he’s majestic.”

Its England’s first defeat in the opening game of a Championship since 1998. Henson becomes a Welsh legend in one game.

It is Warren Gatland’s first game as Wales head coach and the task he faces is big – Wales have not won at Twickenham for 20 years.

Gatland names 13 Ospreys in his starting line-up, Cardiff backrower Martyn Williams is one of the exceptions.

England dominate the first half from Jonny Wilkinson’s boot and Toby Flood combines with Lesley Vainikolo to score under the posts.

James Hook kicks two penalties but Wales trail 16-6 at half-time. They have been dominated at the breakdown.

A shift in momentum is needed but a forlorn attempt by Shane Williams to break from his own line results in another penalty kick for England.

Wales have nothing to lose and begin to find some fluency in play.

James Haskell concedes a penalty, and another quickly follows. Hook converts both.

England had started Wilkinson at 10 with Flood at inside centre and now bring Cipriani on at 13 to replace an injured Mike Tindall.

England’s dominance dissolves and a dreadful pass from Wilkson to Cipriani gives Wales the attacking opportunity they need.

Off the back of the ensuing scrum, Hook waltzes past three tacklers and offloads to Lee Byrne who scores easily. Hook’s conversion makes it 19-19.

Moments later, Mike Phillips charges down a poor clearance kick from England’s half. Gethin Jenkins tidies up and Phillips finishes in the corner.

“Oh England what have you done! And Wales – what are you doing!”

The complete performance. Gatland is skiving ahead of his spell as Lions head coach so Rob Howley is in charge.

Wales have lost their last five matches in Cardiff and been dismantled by Ireland in the first half of their last fixture. They need to win by seven points to leapfrog England in the Six Nations table.

England are chasing a Grand Slam and soaring after beating world champions New Zealand in the autumn.

The inevitable Leigh Halfpenny slots six points early on before Farrell’s first chance hits the post and dribbles over the crossbar.

Wales dominate England at the scrum, who are losing 9-3 by half-time. England are closer on the scoreboard than they are on the pitch.

After the break, Wales pound England for 23 phases and snatch another three points.

With 23 minutes to go, a turnover on the halfway line followed by quick hands to Alex Cuthbert sees him skin Mike Brown on the wing and score in the corner.

England look shell-shocked and the game ends as Wales’ biggest win over England since 1905. Not even Rob Howley would have bet on that result.

After a frenetic opening England begin to take control, benefiting from a disorganised Welsh set piece.

A series of penalties and a Jonny May try see England enter the second half 16-9 up. Biggar and Farrell are kicking like demons and neither has missed yet.

63 minutes in, trouble for Wales as Scott Williams goes off on a stretcher. Alex Cuthbert comes on at wing and George North moves to centre.

Wales are playing a winger at centre, a scrum-half on the wing and a fly-half at full-back.

Five minutes later the ball is spun out to Lloyd Williams who has space to run into. He runs down the line, looks up and spots space infield. With his left foot, he produces a perfectly weighted cross-field kick that fellow scrum-half Gareth Davies collects before sliding under the English posts.

It is a try that could not possibly have been rehearsed. Crystalline teamwork and skill.

Chris Robshaw, who we now know has a penchant for making questionable decisions, declines a kick for the posts to draw the game and Wales go on to win.

England become the first World Cup hosts to fail to make it out of the group stages. It’s ecstasy for Wales.