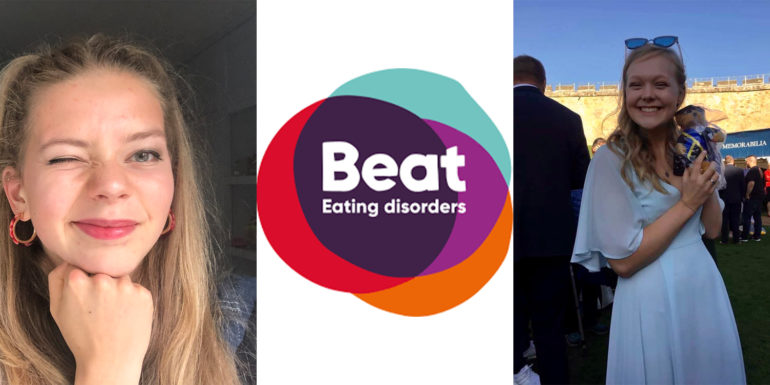 Eating disorder awareness week: What it means to me

‘I plan to celebrate my progress with a slice of cake’

FOR Eating Disorder Awareness Week, two of our reporters talk about their own experiences with eating disorders and what the week means to them.

When I was 12 years old, my throat constricted for the first time whilst eating a bread roll. I panicked, choked and, ultimately, spat it out.

The next few times I ate bread, it happened again. So, as the hypochondriac, anxious pre-teen that I was, I decided it was best to avoid stodgy foods altogether.

This continued until all I could eat was soup or yoghurt.

After countless medical tests including MRIs, electric-shock nerve tests and barium swallows, the doctors concluded that it was not a physical ailment but instead, a psychological control mechanism manifesting as result of an eating disorder.

My obsession with perfection began in first school. I would dread every day leading up to a Monday because that was spelling test day. After getting 10/10 for two years in a row, misspelling ‘affordable’ devastated me to the point of hysterical tears – which was considered very dramatic for a nine-year-old.

At this point, I decided I needed a challenge so, every year, I would give up one food. Chocolate, biscuits, meat, I tried them all, just to see if I could do it.

Each year that I was successful spurred me on: I felt like I could do anything. Or rather, give up anything.

After years of spiralling, when I was 15, I was diagnosed with anorexia, anxiety and depression.

So whilst everyone else spent high school break-times flirting, chatting and making memories, I ate lunch with my Mum.

Don’t get me wrong, I love my Mum, but it was never in my life plan for her to have to meet me at school every lunchtime to make me eat. We’d sit in her car with the packed lunch she’d made and a flask of hot chocolate.

With the help of my therapist, and many, many mugs of hot chocolate, I eventually reached my target weight which meant I could be discharged.

Welcome to remission: a weird purgatory in which I was physically healthy, but many disordered tendencies remained.

One day, on a jog, I was listening to the song ‘Candy’ by Robbie Williams. (Look it was a hard time, don’t judge me.) The chorus says: “if you don’t feel good, what are you doing it for?”

I never expected Robbie to lead to my psychological breakthrough, but those words resonated with me.

I turned around and walked home.

That’s when I turned my obsessive determination to getting better.

After years of restricting my diet, I allowed myself to eat one of my Nan’s amazing roast potatoes again. I felt like my tastebuds had been numb, like I could taste food for the first time in three years. I’ll never forget it.

This year and every year, Eating Disorder Awareness Week is a reminder of how far I have come. I have healthier outlets, the most supportive family and friends and tonight, I plan to celebrate my progress with a slice of cake.

When I was small, I would run round and round an oak tree in our garden. As I raced past, I would make my parents commentate as if I was at the Olympics, zooming past invisible rivals and crossing the finish line only to immediately set off on my next lap.

It is too simplistic to draw a line from the toddler charging around a tree until she was satisfied she had won to the increasingly anxious and perfectionist teenager I became. But at some point, my desire to be the best morphed into an almost pathological fear of failure, of letting others down.

My anorexia emerged slowly, the fear of failure leading to a craving for control. As you grow up, life becomes more complex and uncertain, so I turned to anything quantifiable.

I began to record numbers. The weight on the scales, the distance I ran, the calories I ate. As my mental health plummeted and the rest of my life imploded, I clung to the numbers at the expense of everything else.

Even once I began to receive treatment, the numbers and competition dominated my life.

To begin with, I had to be the best at being ill. Seeing others arrive for their therapy appointments I would be delighted if I was skinnier, smaller, more skeletal, furious if they appeared to be ‘more ill’.

Then I had to be the best at recovery.

I signed up for a marathon, rambled on for hours in therapy, preached self-care and raged against diet culture. I created a checklist for recovery and methodically worked my way through it.

But I still track my steps. I still count my calories, still dance around an exercise obsession, still spend too long in front of a mirror. My numbers stop me from relapsing, but they also stop me from recovering, leaving me in a strange limbo where I am not ill, but I am not well.

You cannot be the best at anorexia. It has the highest mortality rate of any mental illness – those who become the ‘best’ at being ill are not here to tell us their stories.

Nor can you be the best at recovery, because everybody’s takes a different route.

Eating Disorder Awareness Week, to me, is a reminder that there is no competition. We are all fighting to expand services, improve funding and reduce stigma, regardless of illness or weight or stage of recovery.

Even from limbo, I can help that fight.

See our first article for Eating Disorder Awareness Week, on binge eating disorder and the impact of the pandemic: