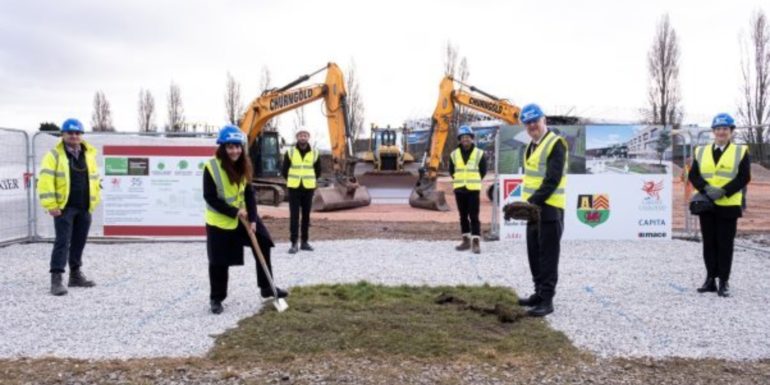 CONSTRUCTION of the new £63.5m Fitzalan High School on Lawrenny Avenue has started.

The new school is being built next to Leckwith Stadium, replacing the existing 50-year-old building, after being given planning permission by Cardiff Council in November.

“Investing in schools and education remains our top priority for Cardiff, and our £284m Band B 21st Century Schools and Education programme is the greatest single investment in the school’s estate Cardiff has ever seen,” said Cllr Thomas.

Canton’s Councillor Stephen Cunnah said: “I am delighted work on the new Fitzalan High School has now begun, this will be the greatest investment ever into a school in Wales.

The original planning application for the Fitzalan High School was revised after 190 parents of the neighbouring Welsh language primary school Pwll Coch submitted objections in February 2020.

Some of the objections raised by the parents of the Ysgol Pwll Coch, including transport concerns, access to sporting facilities and general disruption to the children’s school day were commented on in the planning document.

It highlighted that sports facilities will be organised by the Cardiff and Vale College and the council, and that Canton RFC, Canton Liberal FC and House of Sport as well as Fitzalan High School will have access to these facilities.

The swimming pool will be accessible to the community outside of school hours.

Peter Hughes, 30, the chairman of the Canton RFC mini and junior rugby club said: “Having access to high-quality sporting facilities will hopefully play a big part in our continued development.

“We are hoping to utilise the facilities and build a strong club/school relationship that would see increases in participation levels in rugby in the area.”

Noise mitigation measures have been implemented in the form of an acoustic fence (these are modified to prevent sound waves coming from the external environment) on the southern boundary of Ysgoll Pwll Coch to reduce the noise of the re-sited pitch close to the school.

While the application states that construction will bring a “certain level of disruption” this will be temporary and most of the work will be completed over 100m from Pwll Coch.

In terms of transport, the planning application states that due to the minimal increase in overall pupil numbers as a result of the new school no additional buses will be using Lawrenny Avenue.

The re-location of a new bus drop-off “is considered acceptable and does not worsen the existing situation,” says the application.

Prior to the new school opening, however, improvements will be made to pedestrian and cyclist accessibility and safety on Lawrenny Avenue, although there is no proposal for a pedestrian bridge to be installed.